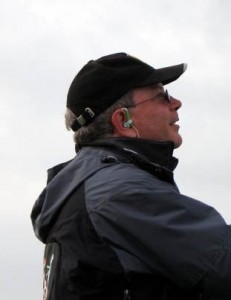 Over to the left, you can see a rare combination of completely blissed out and stressed. Blissed out because I’m flying within one of the largest collection of Revs ever to take the sky at the Bristol Kite Festival (we cover this in this issue of course!) and stressed because you’d have a tough time imaging the concentration needed in holding your place in the mob when there is 50+ Revs in a fairly small space of sky! But, we at Kitelife like to undertake such things and report back on them to you…It’s a tough life…

This issue manages to take us all over the place, from the Euro Cup Championships in Holland, to two events in England and back to North America for a few more events. Alas, sometimes this coverage doesn’t work out as planned as you’ll see in our article on a rained out MOTS festival this year, but, more often than not, good stories and great pictures come out of any festival as they unfold around the world. And to that end, we’d love if it you’d share your experiences and stories with the rest of our readers. Just see the submissions page, linked above, for a look at we need format wise, In particular, wed love to get more East Coast events included within our pages. Thanks as always for whatever you manage to contribute!

As to previous contributions, a quick check at where the “back issue conversion project” that the esteemed Publisher, Mr. Barresi has been involved on, shows he’s easily past the halfway point now, so, onwards we’ll keep going until such time as every previous issue had been redone in the new format. Judging from the comments we’ve received, you like the new format, so, thats certainly a plus. Hopefully it’ll be some time before we undertake such a project again but, thanks for your patience with this! Mayve before Christmas?

I’m also tremendously proud to announce that John has won the The Steve Edeiken Memorial Kiteflier of the Year Award at the AKA Grand Nationals. The award recognizes the a person who, during their lifetime, will have shown friendly, loving, fair, and even-handed concern for: People in general, but kitefliers in particular, Kiteflying in general, but for craftsmanship and technical developments in particular, and Communication in general, but for leading and participating in kite events in particular. A fantastic honour to have bestowed, well done John! He joins some pretty prestigious company of previous winners.

Ah, see? A nice chance for a segue about Christmas! Have you looked in the Kitelife store recently? There may be an item or two that’d be PERFECT for that kite flyer in your life! The earlier you order, the better chance it has of arriving before Christmas arrives or, maybe the perfect present would be Kitelife subscription! Either way, we have you well covered…

Next Prize Drawing to be held soon!