This festival started much like any other. I departed for John’s house on Thursday so we could catch our morning flights on Friday. It was all normal affairs until the morning came and we got our fun surprise. It was about 3:30 in the morning when John got the phone call that usually lets you know your flight is on time, only this time it said it was canceled! AHH!!! The reason being that part of our trip had been routed through Houston and the airport was to be closed later that day due to hurricane Ike. This meant a huge disaster for our trip. Not only for the Mots festival but our entire 25 day tour was now in limbo. 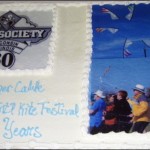 John was immediately on the phone with the airlines, desperately trying to find anything that would get us to our destination. Luckily he managed to get an incredible customer advocate on the phone. It took 3 hours and every ounce of his “Barresi charm,” but he managed to find some tickets that would allow us to arrive later that night. As if that wasn’t enough to deal with, Steve and Adrian who also went through Houston, had issues with the impending closure of IAH but did manage to get on one of the last flights out of Texas, making it out to join us as well. With a day like that we were all happy just to have beds for the night.

We woke up the next morning around 5am for a publicity shoot at the field but found it to be canceled due to rain. Instead we enjoyed a leisurely breakfast with the other flyers, and made our way onto the field a little after 8am. It was still a bit drizzly that morning but nothing major. What a beautiful location it was; a large grass field to fly on, the city and lake in the background, it was excellent.

As the morning passed the rain came down harder and harder. It wasn’t bad though, with temperatures in the high 60’s, soon everybody emerged from the kite shop and made their way onto the field to have some fun in the rain. There was a light wind and as the morning progressed the wind improved and by noon we had a sunny day! Now it started to look like an ideal kite festival with single lines flying in the backdrop, all the flyers at the edge of the field in their chairs and tents, and strutting their stuff in the demo field. Some of the sport kite performers included Josh and Zach Gordon, Chicago Fire, pairs team Pegasus, and iQuad just to name a few. To end the show with a bang, we had a nice Rev mega fly. The evening was very nice. We were treated to a fabulous dinner and raffle by Kite Society of Wisconsin. Thanks guys! 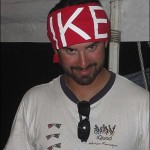 After the great day Saturday turned out to be, we wanted even more for the next day. Sadly, that’s not what we got. Remember hurricane Ike had stopped our flights at the beginning of the trip? Well, it brought a downpour to us on Sunday. Cold, wet, yucky weather drove everybody into the kite shop or under a tent that day, with an occasional run outside for coffee of course. There was no shortage of wind however, probably around 15-20mph with gusts. That was enough to encourage me onto the field despite the storm at around noon, and I was quickly followed by three members of Chicago Fire. A little later on, Dan Jones saw the high wind, terrible weather, and very slick grass as a perfect opportunity to pull out his 4-8m Super Blast and give it his all. Kudos to you Dan! We did get a short break in the weather later that day for a couple quick demos and even a rev mega fly. Unfortunately, I hadn’t brought any rain gear with me on this trip so I was soaked to the bone and was forced to retreat back to the hotel.

It all had to come to an end as festivals tend to do. Everybody packed up their wet kites with a smile and we all said our goodbyes. It was a very fun festival, and I will surely be back next year. Thank you to all involved in organizing this event and to all the volunteers who made it possible! Despite the vast amounts of liquid sunshine, it was a very fun weekend!