As I eluded to within my two articles regarding my trip to the UK, something rather magical came together at both events. When it was first discussed how we would be able to manage large amounts of flyers in megaflys at the two events. We were looking at 40+ flyers for both events and while the “traditional” approach to megaflys works to a degree, it’s also fraught with issues. iQuad members have seen this more than a few times and trust me when I say this, I’m not knocking the “traditional” approach to megaflys, they are a LOT of fun and have been 100% great to participate. 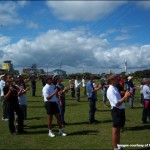 But, briefly, the biggest issue is one of communication (and, amusingly, this STILL came up with the Grid approach, but, for different reasons as I’ll discuss later on), namely how to get commands down to the end of the line. Past experience has shown that few approachs can really make any real difference. Once you get past about 20 flyers, whoever is calling simply can not yell loud enough to get the commands down to the end of the line in either a timely manner, or for that matter, a manner in which people at the end of the line can hear. So with this in place as the circumstances you have to deal with, managing large long lines of kiteflyers can become pretty tricky to accomplish anything beyond a Mexican wave. Once you get beyond 20, even a simple follow becomes problematic as the people down at the end simply do not even have the line length needed to try and wind 20 kites around in a figure eight, unless we all move to 200 foot line sets (60 metres for our European friends…). 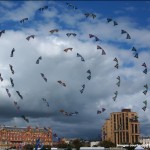 But, despite the problems of “long line” megaflys, they are tremendous fun and some great flying has happened in them, from the 30+ at Wildwood and Treasure Island this year, to 49 at Tokyo Bay Flight Party in 2007. And crowds simply love the sheer spectacle of it, as much as the flyers involved in flying within them. In my eyes, there are few things more challenging for a rev flyer than to try and “hold your own” within a super large group, but, when you do, it’s also supremely rewarding and will usually leave a huge smile on your face.  But, Felix Mottram, founder of The Decorators (the Worlds Oldest Quad Line Kite Team. Wow, that souds bad, sorry Felix! Maybe “longest running”? That definitely sounds better…) had an idea one night. Maybe it came to him in a dream, or he looked at something and an idea popped into his head, but he began to try and get some of us to get our head around it. And to be honest it made no sense to me initially, I know I had problems visualizing how it would work. I don’t think I “really” got it until such time as Felix worked a group of us through it in Uchinada earlier this year.

So, just for a smile, and, because I am an email packrat whos pretty organized about it, I went back through the initial months worth of emails regarding what become the grid. As we started getting an idea of how many flyers would be involved, it became an issue as to just how big of a field would we need to hold so many people. Stephen sort of eludes to the idea in early December, and by December 20th, Felix sketches it out in an email :

“Team leaders will usually fly out of the window to the point that they ‘have
to turn’ and the rest of the team cope as best they can.  In many respects I
think that in a mega team event everyone should remain in their power zone
of the available wind.  This led to my notion of the staggered team as in
ten across and ten deep for 100 fliers.”

And from that point, “much discussion ensued”  and it managed to become a much clearer idea. Basically, instead of this :

as vertical columns of flyers. For example, there was six of us within iQuad in the UK. When we flew on our own, we flew a traditional six in a line, John calling on the right side of the line, in position 1, and me at the left side of the line, in position 6. When we flew in a grid style arrangement, our order remained the same however, I was at the very front of the line  and the rest of iQuad was behind me, ending with John at the back of the line. So looking from the back, our vertical line looks “normal” but, spacing wise, our kites are staggered if you look from the side, ie :

As I’m trying to mentally write this out in a word processor, I think it’s best illustrated by simply seeing it in motion, so I popped over to Youtube, typed in Portsmouth rev and a bunch of videos came out, I grabbed the first long one I saw as an example :

A tip of my hat to all the people that caught these flys on video. One of the things you run into with this arrangement is that with the “long line” megafly, you are mostly concerned with who is beside you, left and right. Within the Grid, you are now also potentially interested in who’s up/down in your line as well, so, it requires a big chunk of concentration in order to keep your ducks in a row. Such a degree of concentration that it’s kind of tricky to be able to take your eyes back and see the entire grid as it’s moving through maneuvers, especially the first few times you fly within one. I’d go as far as to suggest it’s a little unnerving at first, but as you gain comfort in the arrangement, you can sneak a look at the big picture with a bit more ease. 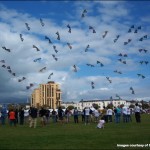 And also, I’d be remiss in not giving Stephen Hoath a huge tip of the hat as well. Pity the poor man, he now has 48 rev pilots under his command, at the same time as flying his own kite. He needs to think of where the entire group is going, and how can put this into words we can all understand, all the time keeping an eye on the overall big picture and identifying problems (and, there will be problems, from any level of flyer!) plus plotting how to get out of them. That’s no small feat. Initially, we had tried using both a megaphone (ably held by Corey Jensen in the UK, thanks Corey!) or Stephen yelling but, there were issues with all the flyers being able to clearly hear what was going on, on top of the music that was paying. Another approach was used in Bristol, and this proved to be a much bigger success, which was running Stephen’s voice through the massive PA system. As we spent more time within a Grid arrangement, Stephen started coming up with new ideas and also simplifying the calling procedures and by Sunday at Bristol, he sounded like the most relaxed captain of a 48 member squad as you could possibly hope for. Well done Mr. Hoath!

Before the “large” grid you see in the video above, between Stephen and Felix, they attempted it a couple of times at two events as a sort of “proof of concept” Stephen ended up going first at a rev clinic organized in Dunstable this past January. Fraser McNelly wrote about the weekend in Issue 58 : 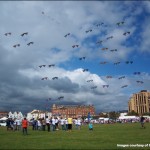 And, the first time I got to experience it firsthand was in Uchinada Beach where Felix had managed to make his way over to the festival. In Japan, we ran the Grid with close to 36 flyers but, very low winds dogged efforts to really work with the arrangement for very long. But, I can say that it’s the first time it made clear sense to me how it would all fit together and the potential that lies within Grid flying. And “potential” is a key word here, I don’t think we have even really begun to explore the potential of what can be done with this kind of flight arrangement, but, as more and more large groups try it out, I’m sure we’ll see a new set of moves emerge to amaze us all.

A few tips regarding putting one of these together with your own large group.

1] Ideally, you want numbers that can break down into columns easily. Columns of 4 – 6 flyers tall is very manageable, so, 16, 25 or 36 flyers. Or more if you can… That’s not to mean it cant work with smaller cubes, even as few as 4 flyers, but, when you get to larger numbers, the real spectacle begins to unfold.

2] In the illustrations above, the lines along the ground look straight but, in fact we found it was best to stagger them a little to each side, ie, like this :

3] Be mindful of whether or not you can comfortably hold your position where you are. With a good brisk breeze, most people will have no problems with this but, as the wind starts getting down lower than 5mph, it’s going to get trickier and trickier to manage. Bear in mind that that you now have kites on all sides of you, disaster looms from side to side, above and below! (that being said, at one point, Mike Kory of iQuad got clipped near the top and managed to go straight to the ground without taking anyone else out, nice shot Mike!)

4] Most importantly of all, have fun. Relax, take a deep breath, settle into it.

With some luck, we’ll see further, and even larger examples of the Grid over the next few years. Keep an eye on the Rev Forum as this has typically been where the details have been worked out but, with a little luck, we’ll see  a few large attempts with this arrangement, perhaps as soon as this years Tokyo Bay Flight Party. Keep your eyes open, and keep your eyes on your kite… And, a huge thanks to all the flyers involved in the flys in the UK, it was a great pleasure to meet and fly with every single one of you and I hope to do it again soon!