Peace Park in the Khayelitsha Township is a dusty, windblown patch of ground in a sea of tiny cinderblock homes. This is the ritzy part of town. Further out, thousands of dwellings are made from plywood, corrugated metal, tar paper, and plastic tarps.

Each year, we come here to fly kites with kids that most tourists to South Africa never meet.

Our hosts, Cape Mental Health have based a facility nearby. They operate a day care center for children with mental disabilities and often, multiple physical challenges. Day care is important since families – usually a single parent – must choose between staying home to care for a child in need, or going to work to keep the family fed.

The space is deserted when we arrive. Last year we had to move several grazing cows of the grass before we could launch kites. But within minutes, hundreds of children appear. Some are bussed over by CMH, some walk in groups from a local school, and some scamper in through openings in the fence from nearby homes.

Our kite flying team included Susie and myself, Petra DeBack from Switzerland, Bernhard (Drachen) Dingwerth of Germany, Phil Broder of the USA, Dave and Nadia Sampson from further north in South Africa, and Cape Town kiter Roger Duffet. But some of the kids on the field also had some kite flying expierience from past years. Click here.

Susie and I have learned that it is always windy in Kyalisha. Last year we brought a big Bear to entertain locals and struggled to hold onto it. This time, we opened our bags and pulled out four 10 foot racing Bols.

Imagine the dusty pandemonium as teams of small children challenged the big baskets and try to move them across the windy playground. Often the baskets won.

Bernhard and Petra launched a large Crocodile kite. Reporters and photographers swarmed in. This was a pre-event for the Cape Town International festival and we were hoping to meet with the children but also generate publicity. And within ten hours, photos were available in Germany, Canada, the San Francisco Chronicle , CCTV in China , and the Wall Street Journal.

Susie and I are proud to be supporters of Cape Mental Health and were recently honored to be named “patrons” of the event. It is a special joy to come to a beautiful country, work with good people, support a worthy cause — and to get to fly kites too! We’ve been here five times since 2002 and usually arrange small teams/tours.

In addition to Kyalisha, our small group took in the sights of Cape Town from an open top bus, climbed Table Mountain, visited the winelands, and lunched in a treehouse restaurant.

I drove the van. Traffic drives on the left in South Africa. The manual shift is opposite too. So I struggled to keep the car where it was supposed to be and the group struggled not to laugh whenever I stalled or missed a gear. Thank goodness for GPS directions. “Re-Calculating….”

We stayed in the wonderful Homestead Inn. At Cape Point, we had to chase baboons off the cars in the parking lot. In Aquila, we saw four of the “big five” from an open land rover. We hosted a traditional “brai” for kite friends in the city. And at Boulder Beach, we walked among the African Penguins. 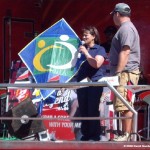 And then we went to Africa’s largest kite festival.

The Cape Town International Festival is a fund and awareness raiser for Cape Mental Health. It is a natural fit. On a kite field, age, physical ability, intellectual disability, race or gender doesn’t matter. Everyone is smiling.

This year, 20,000 visitors paid to enter the festival grounds in Muizenberg and see the show.

For a really great audio/visual program on the festival, click here.

One highlight for me has always been the school program organized by CMH. Classrooms are sent kite skins in advance, they are decorated to reflect the annual theme. And then brought to the festival to be assembled into arches. Instead of 500 kids running in 500 directions dragging kites behind them, the result is an organized and successful team-building exercise.

This year, I was particularly impressed as young, articulate children went to the stage to present their kites to judges and explain the symbolism. It was good to hear 12 year olds talk about national pride, cooperation, mental health, race relations, and the future.

Over on the show kite field, our team lofted a variety of larger inflatables. A group of local fliers including Keith and Barbara Mould, Greg Mountjoy and his son, Michael, Brian Skinner, and Mari & Ashley Ware-Lane were on hand. Brisk winds blew in off the Indian Ocean and Table Mountain in the distance framed a great kite scene.

And then it was time to fly home.

It is a long way to South Africa and a long way back too. From Johannesburg to Dulles is 18 hours. With check-in, layovers, and connections, the commute was about 35 hours. But it was time well spent. We’ll be back in Africa again next year.

See you on a beach somewhere…