The front end of every exhibition is the vision.
It was Francisco Toledo’s vision to design and paint his images on handmade paper at a mill outside of Oaxaca, Mexico ten years ago.  In ten years, this vision turned the economic corner and began to make a profit.  In celebration of this accomplishment, Toledo celebrated the 10th anniversary of the paper company by inviting the Drachen Foundation to mount the largest number of kites in an exhibition, as well as deeding the ownership of the paper company to the community members who have worked it since the beginning.

Thanks to the leadership of Drachen’s Scott Skinner, he made what seemed the impossible in exhibition and design of kites a magical moment. 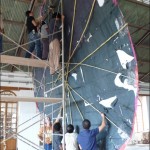 In every exhibit venue there are compromises that must be made in order for a successful kite exhibit to be launched.  Sometimes it involves the venue’s restrictions; low ceilings, bad light, or non-existent tie-points.  Other times it is a restriction of time; “you have 8 hours to install the show.”  Very infrequently, an opportunity arises that offers a venue with almost unlimited space, dramatic light, interesting architectural details, and plenty of time to accomplish the vision of the exhibit.  The frequency of this happening is probably similar to the frequency of happening upon budget airline tickets to paradise destinations like Fiji. That’s what the Drachen Foundation had with Oaxaca, Mexico’s IAGO (Institut de Artes Graficas, Oaxaca) as it collaborated to celebrate IAGO’s 20th anniversary and the 10th anniversary of the Papel Taller (a now independent organization that makes paper and paper products).  What we didn’t expect was a very interesting archival problem! 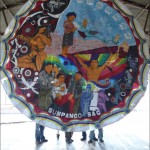 The Foundation shipped two, ready-to-hang, paper kite exhibits; Greg Kono and Nancy Kiefer’s “Artist and the Kitemaker”, and “Sky Art” featuring works by Nobuhiko Yoshizumi, Jose Sainz, and Scott Skinner.  Oaxacan and Mexican artists were also invited to submit work on paper to be finished into kites on site.  But the featured attraction of the exhibit were four Guatemalan barrilletes gigantes, traditionally used to celebrate the “Day of the Spirits” (much like the Day of the Dead celebrations in Mexico.) Christopher Ornales our 2007 grant winner who studied and documented the kites of Guatemala and I were faced with the problem of framing these huge paper sails – one, a 20-foot in diameter circle, another, about 30 feet across and 20 feet high – so they would provide the backdrop for the entire exhibit.  Because Christopher works at San Antonio, Texas’ Alameda Museum, and will likely bring these same kites to San Antonio, we realized that what we did in Mexico would likely have to be repeated in the US. 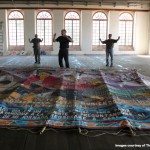 I suggested that we use the local reed that was readily available to construct frames.  These light and brittle stalks could never hold up to the real stresses on a large kite, but could, at least, give the appearance of authenticity and provide enough structural support for hanging.  But how to connect them to the fragile paper sails without altering them?  I suggested a solution and let Christopher, the museum professional, make the final call.  After consulting with his registrar/conservationist in San Antonio, our strategy was set. 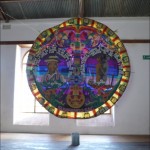 On the backs of the paper sails, we adhered 1-foot squares of clear tape at each spar end-point.  I can attest to the fact that the tape was exactly like that used originally on the backs of the kites; very thin, poor adhesive, and impossible to find the end!  To each of these square areas, we then taped the spars in place, using additional spars for support where needed.  We found that this method would allow us to simply cut away the spars without any alteration of the sail; no additional holes, tears, or paper.  Over time and a series of venues, this method will serve to re-enforce the entire outer edge of the kite sail without visible changes to the front of the kite.  Original tears in the backing paper or in the sails themselves will be left alone to show the original treatment of the sails.  If the sails were to be restored to their original condition, it would be a simple task to remove the backing paper under the tape sections and re-tile backing paper on the entire sail.  The fragile artwork on the front of the sail would be left undisturbed.

Needless to say, with the barrilletes gigantes in place, the IAGO exhibit was a great success.  With close to two hundred artists who submitted artwork of sails on hand made Oaxacan paper, including Francisco Toledo, founder of IAGO and the Papel Taller. The final exhibit included almost three hundred kites.  Installation was accomplished by Christopher Ornales, Greg Kono, Jose Sainz, Ali Fujino and Scott Skinner, with help from CACA’s Daniel Brena orchestrating the IAGO staff, local middle-school students and community volunteers.