It was with a heavy heart that we recieved an email from Mike Dallmer recently, that informed of us Scott Spencer’s passing. To get an idea of just how much Scott accomplished on behalf of kiting, take a look at the list of achievements listed in his nomination for the Eideken Award and the next time you are out flying, fly for Scott’s spirit.

Kiting History:
Scott has been involved in Kiting most of his life and seriously got involved in our beloved hobby in 1979. He was given his first real kite then and decided that he could make it bigger. From that first little Dragon Kite he started sewing his own kites. Scott has been to 24 of the 30 AKA Conventions and considers himself the youngest oldster of the AKA, at the young age of 49. 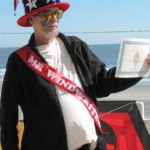 Scott has been an ambassador of kiting, traveling to India, Columbia, and England chasing the wind. He has also been invited to festivals throughout the United States.

Interpersonal Qualities:
Scott has met and made many friends throughout the kiting community, not just locally, but through his travels nationally and internationally. While out on the kite field, it is not unusual to see Scott drop what he is doing to help someone with their kite. We consider Scott a personal friend who has helped us through many hard times and is always there to bounce an idea off of.

Communications:
Scott has written several articles for Kiting and for WindWriters, the SJKF newsletter. He has been interviewed and photographed by various local newspapers in the Philadelphia/ South Jersey area. Scott has worked hard to spread the joy of kiting to kids of all ages and to extol the advantages of being a member of the AKA

Educational Activities:
Scott gave Erin Edeiken her first real sport kite lesson at the AKA Convention in Iowa, then turned the duties over to Lee Sedgwick. Scott, as noted above, has given many kitemaking workshops, often coming up with new, innovative and exciting designs. He has also given many workshops at the AKA Conventions, most notably the make and take AKA table banners that many of us have had the pleasure of displaying on our desks. Scoot also has done many Library Displays, not only for National Kite Month.
Scott presented the second ever online kite making workshop and has contributed many tutorials on the Kite Builders Forum, sharing many of the details if kite making to the world.

Craftsmanship:
Scott has awards from many of the kite making competitions that he has entered. He believes that he may have more AKA kite making awards than anyone. Scott has made and perfected the Facet Kite into a simple design almost anyone can make. He originated the Transition Tail and a unique graphic technique that weaves the material to create a complex graphic, but it is easy to do. The kites using this technique are outstanding. He has made so many artistic kites that I cannot remember them all. He also designed the SJKF Mother Banner and Personal Banners.