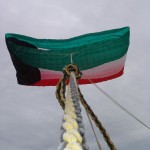 The 2009 edition of the Guinness World Record Book has included a listing of the world’s largest kite. There are over 10,000 Guinness Records with relatively few of them making it into their yearly publication.

The current world’s largest kite was designed by Peter Lynn, built in New Zealand, and commissioned in February 2004 by the Al Farsi’s of Kuwait.

Unfortunately the Guinness record archives and book listing aren’t entirely correct. The important details are factual; the size of the kite, when, where, and how long it flew for.

The successful and documented Guinness Record flight was 15 February 2005 in Kuwait, however the snafu is that the kite is listed as made, owned & flown by the Al Farsi’s, leaving Peter Lynn out of the equation entirely.

When Guinness awarded the world record status and certificate in January 2006 the mistake was immediately apparent. After discussing it with Peter he decided to let it stand as it was. Considering the nightmare it was getting the kite recognized by Guinness in the first place, he didn’t think it was wise or necessary to try and make a change.

Below are the highlights of the Mega-Flag Guinness World Record farce which pulled the curtain back on the Guinness sham.

October 2003 Peter Lynn hires me, Meg Albers to write a proposal for his new kite design, the mega-flag. Peter wanted to make the flag kite into a size that would break his current record holder, the Megabite kite (635 sq meters), held since 1997.

November 2003 the initial Mega Flag Kite proposal letter was sent out to multiple organizations, businesses, and groups touting Peter’s Megabite Guinness record and the resulting publicity goes along with it.

Literally hours after the letter was distributed Guinness announced that there was a new ‘largest kite flown’ record holder. A Chinese kite that was in the shape of a flat serpent/dragon kite with a 1000 foot long tail…a long thin ribbon tail. Peter’s Megabite kite was taken off the Guinness web page, and Guinness no longer considered it the world’s largest kite.

I wrote an appeal to Guinness pointing out the discrepancies with their facts, and obvious conflicts and problems with their ‘new’ method of measuring compared to their previous methods. I kept consistent pressure on Guinness with a stream of constant emails and phone calls. It was pointed out to Guinness, repeatedly, that the new listing could be considered for the longest kite tail; however it was in no way a part of the surface or lifting area of the kite and could not be calculated into the size of the kite.

It was during these correspondences that it became very apparent that Guinness was in the business of selling books. They were not in the business of fact checking, accuracy, or familiarizing themselves with the field they are deciding on.

In hindsight, when you consider the number of claims and records they process annually it would be impossible to be well versed in every category. Keeping that perspective in mind it is amazing the process works as smoothly as it does!

February 2004 the Al Farsi’s commission Peter Lynn to make his new design into the world’s largest kite, in the likeness of the Kuwaiti flag.

March 2004 Guinness offers a full apology to Peter and re-instates him and the Megabite as current record holder of the world’s largest kite.

I also persuaded Guinness to change their guidelines to only consider the lifting area of the kite, when considering future size records.

February 2005 the successful record flight with an abundant of fanfare, documentation and verification. The president of OPEC was present as one of the signators. 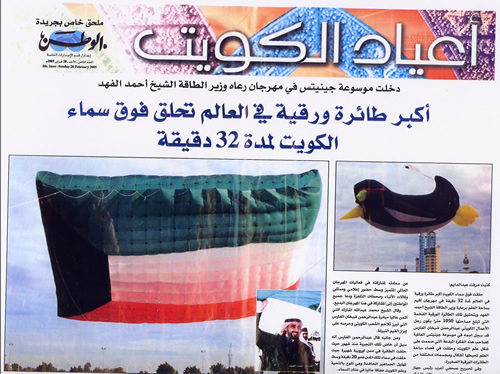 March 2005 I submit a Guinness application package for the Al Farsi’s as new record holders. The record is for the ‘Largest Kite Flown’ and Peter is listed as the kite maker.

I waited the six weeks Guinness said it would take to complete the process, and then i begin to inquire.

July 2005 Guinness officially refuses the Al Farsi claim and denies the record attempt. Guinness lists the reason for the denial as being that the kite was anchored to a bulldozer. Guinness says only one person can fly the kite.

I begin what became a long, arduous and frustrating appeal with Guinness. My appeal was based on the fact that all previous world records for the largest kite flown, including the current one, were anchored exactly the same way, with heavy earth moving equipment.

I vigorously pursue this terrible injustice. I send two emails a week to Guinness and called their London office once a week. I had a mission and was not going to be deterred.

September 2005 Guinness apologizes and assures us that they have changed their guidelines, again, to allow anchors in the world’s largest kite category.

I thank them, and then immediately ask when the Al Farsi’s will be awarded the world’s largest kite flown record. Guinness said they will get back to me later that day.

I receive the run-around, with a constant set of delay tactics and excuses, but still I persist.

September 2005 the AKA (American Kite Fliers Association) officially certifies Peter Lynn’s mega-flag kite design as the world’s largest kite. There are currently three kites identical in size; the first kite built was the Kuwaiti flag, then came the Japanese flag kite and then the USA flag kite.

December 2005 I received a refusal letter from Guinness, the same exact letter that I received in July 2005, from the same person at Guinness. This new letter had one extra line…saying “this decision is final”. After much work I found out that the person who wrote the Sept 2005 email, the one who apologized and corrected the problem, the record adjudicator, was longer working at Guinness.

I wait a few days…to cool off…and then I call Guinness and start all over again, submitting an appeal.

I changed my tactics with Guinness and begin to play hardball. 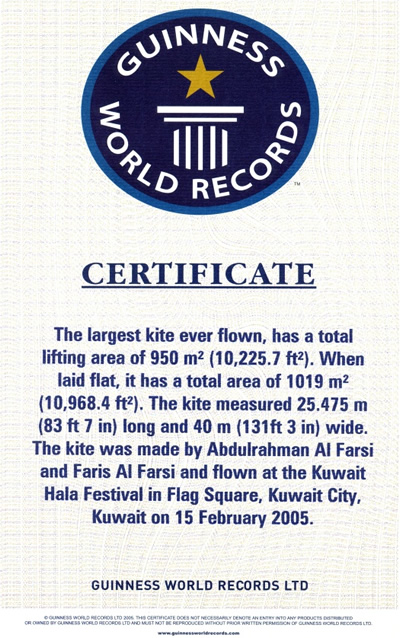 The record is great; the Al Farsi’s are amused by the mistake that gives them credit as the kite maker, owner, and flyers! Although they do admit that public recognition in the annual Guinness World Record Book is really what they would like to see.

There is no application, no appeal, no debating with logic when it comes to inclusion in the book. Everyone wants to be in the book…very few get to be in the book…and it is 100% editor’s discretion. They answer to no one. I did not let those minor details get in my way. The campaign was on!

February 2008 Guinness requests high resolution images and permission to include them for publication in the 2009 Guinness World Record Book.