With everything that’s been going on over the past couple of years, I haven’t been keeping up with the Kites Life articles… Generally, I’d reserve this column for general goings on in the kiting world that don’t make it into our regular magazine content, but again, my plate has just been too overflowing as of late.

However, I do have some news which many of you may already be aware of… Yes indeed, I’m now engaged to be married, and to a kiteflier, no less! 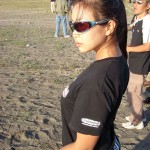 On my first trip to Japan for the 2007 Tokyo Bay Flight Party, I got the chance to fly #2 in a line up of 48 Revolution pilots and kites (which set a world record at the time). Now, flying in the #3 slot was a wonderfully noble and stylish lady by the name of Takako (or “TK” to her US friends)… While we didn’t pursue anything more than a friendship over the next several months, we did stay in touch, learning more about each other and sharing ideas on kiting in general.

On the 2008 tour with iQuad, I had the opportunity to return to Japan for the Uchinada International Kite Festival and knowing she was going to attend, I kept a vigilant eye for her arrival, and finally got a glimpse of her flying a little ways down the beach… After 15-20 minutes of quietly watching her fly, I was pretty much gone (hook line and sinker)… Just 6 months later, both of us having made several extended visits back and forth between Japan and the US, I proposed at the 2008 Tokyo Bay Flight Party, where we originally met.

Rest easy however, as I am definitely not moving to Japan… She’ll be joining me here in Portland (OR) as soon as we can get all our affairs in order, and after we get through the tedious visa/immigration process. With a 10-year career in marketing behind her, she’ll be joining forces with me on Kitelife and lending her knowledge toward the continuing effort to grow and enhance our offerings.

Additionally, with five years of Rev flying and competition experience under her belt, you can expect to see Takako touring with iQuad near the end of 2009, or beginning of 2010. <grin>

Why am I writing about all this here? Well, simply, I consider the kiting world to be my family at large… There is no one I’d rather share it with, and I like the idea of keeping all of you in the loop as things develop here.

Other news from the B-side…

Keep an eye on Revolution over the next few months, as they’ve got some pretty cool new stuff on the roster including some absolutely wicked custom handles, travel frames and rumors of a new kite in the works.

With the KiteLines Bookstore being officially closed and gone, I’m working on assembling a variety of kite book and DVD resources in an upcoming “store” part of the Kitelife web site which will include kite designs, photography, childrens material and novelty topics… I hope to have the first version of this up and running sometime in the next couple of months.

Seeing as I’ve got a full collection of American Kite Magazine on file, I’m still looking to archive these to PDF as we did with KiteLines and SKQ, provided I can get permission from the original publisher… This will be a time-consuming project, but it’s important to me in the grand scheme of things and I’ll be doing everything I can to get it into the active “to do” list.

Also on that ever growing “to do” list is a full variety of Revolution tutorial videos which will go into the Kitelife subscriber archives, covering everything you could possibly want to know about these kites including managing your equipment, tuning, flight techniques, “innovative” or unusual styles such as 3D flying and dogstake, as well as team maneuvers.

These are just a few of the things on the horizon, there’s always something brewing here… Stay tuned as more and more comes together!