The Treasure Island Kite Festival and Rev Clinic was everything I had hoped for and more! There was tons of flying, laughing, and hanging with friends from around the country and beyond. I finally met some of the folks I had been speaking with on the Rev Forum…very cool! The Rev Clinic was a huge success (imho) and I got a lot of info to tweak my skills, thanks to John Barresi. The weather was great and the flying was the best! 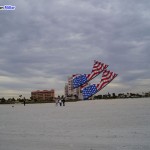 I arrived Thursday afternoon with Rich, Al, and Alden (part of the Jersey Crew).  We immediately went to the beach to fly. It was mostly overcast and the wind was decent, so we flew on full sails. Jynx arrived a couple hours later and joined our posse almost immediately. Rich and I flew our Old Glory(s)… with mine being her maiden flight…. I was totally psyched as they looked great in the air together!

Friday morning, the day of the Rev Clinic arrived and a fairly strong, cold wind was blowing while the temps were in the 40’s…..brrrrrrrrrr.   There were brand new flyers to much more experienced flyers in attendance. Delaney, 11 yrs old, the youngest pilot, along with folks of all ages really seemed to grasp the wealth of info that John  was giving us. While John was explaining an easy way to set the lines up, Melanie handed off her lines and kite to John so she  had hers set up and ready to fly; smooth move Melanie!

This was my third clinic and there are things I certainly didn’t know and things that were extremely helpful to me to further improve my skills. We split up to fly and John walked around giving hands on instruction to those that really needed or wanted it. Even though the festival hadn’t officially started, there were some folks that put up some SLK’s; enjoying the beautiful blue skies as a back drop.

The day warmed up nicely, although I was never complaining as back home it was 9 degrees with snow on the way! Later in the afternoon we did some team flying.  Al, with about 5 months of Rev experience was laughing and exclaiming how awesome the team thing was. He was totally stoked and I was extremely happy for him!

I had to leave the team fly to practice the Rev-O-Lettes’  routine for their debut on Saturday.  Dennis filled in for the fourth person as Cathy wasn’t available.  He does look pretty in pink!  It was getting dark so  we left the beach and went to Ted Peter’s Famous Smoked Fish, Inc. for dinner and laughs. The Key Lime pie was amazing!!!!!!!

As if we hadn’t flown enough for the day, we went out to do a night fly after dinner.  The winds started out light, but really picked up and we got in some great flying. The lights on the kites rocked!!! Some guy actually came over to me saying that he thought he was watching UFO’s, honestly!

Saturday came and it was a gorgeous day, milder than Friday, but still chilly to start.  The winds were blowing from behind the hotels which made for some funky flying from the swirly winds. It looked as if all flyers were having a great time, and why not, it was gorgeous out!

John had asked those interested to do some team flying in the Rev’s designated area which was very cool!  Unfortunately, the winds mellowed considerably and we couldn’t do the Mega Fly or the Rev-O-Lette demo; although we did set up the  pink kites for the first time and give it a shot!   For the next couple hours  we did some light wind flying by the water; it was sweeeeeeeeeet!  Once again, around 4pm or so the winds picked up. The rev flyers moved back to the main rev area and started a team fly. There wound up being eight  pilots out there flying with Jay calling. We were successfully doing several team maneuvers; including blenders! I know everyone that flew was totally stoked with how well we looked! In fact, we could hear the spectators applauding us.  As the sun began to set, we packed up to get ready for dinner and the auction.

Dennis was the Auctioneer and did a great job. He retailed for only $495.00; one of his ongoing jokes throughout the evening on the retail price of various kites!  Those of you there will fondly remember this and smile.

Sunday morning was slow going as we partied late into the night. My friends and I had to check out as we were all leaving TI before the end of the day. The winds weren’t there early on, but as the morning progressed, the wind began to pick up. There was a lot of light wind flying until about midday and then the winds really started to pick up.  It’s as if the wind gods were shining down on us.  The wind was perfect all afternoon! There were Bol Races and all ages competed!

Then the Rev-O-Lettes made their debut. The pilots were Sherri Pigeon, Lisa Willoughby, myself (Laura Berg) and Cathy Shook. We had a great time and it seemed like the spectators enjoyed it, too!

Then the event of the day (imho) the Mega fly was on!  We had 18 pilots to start and after the first little tangle, we lost three pilots to nerves. It was a great time and a perfect ending to the weekend. The double ball burst was just too cool for words! Of course, the festival couldn’t have been complete without the flyers forming the letters TI.

As the Mega fly ended, Rich, myself and Alden had about half an hour to break down our kites and say our good byes… which wasn’t long enough, I needed at least two hours to this properly!  Of course, it was during this time that Pat’s famous meatballs were waiting for us….boy did that hit the spot!  She is the EFO of Treasure Island … Executive Food Officer… and she’s the absolute best!

The weekend went by way too fast. That always happens when you’re having a great time!  Everything was fantastic… the weather, the clinic, and most importantly all of the people that were there for the festival. Sherri And Steve Pigeon did a wonderful job of organizing this. Sherri, you and your family made me feel right at home, thank you. I look forward to doing this again next year!  Good winds and keep on flying…. See you all next time around or sooner… at a beach near you…or me!