A former schoolteacher, Greger taught thousands of children the how to make kites, making her one of the pillars of kiting education. Her best-known books Blown Sky High, Kites for Everyone and More Kites For Everyonewere written and self-published by Greger, whose desire was to bring her years of kite plans and experience to other educators and all interested in kites. Her aesthetic was to provide plans that were simple to build, took less than an hour to put together, and were inexpensive to produce. These plans were extremely influential to kite makers at the time, and many can claim that one of the first kites they themselves constructed was a Greger.

In addition to Greger’s influential kite plans, she was also valuable as an international networker. At the time that Greger was learning about and teaching kites—as the American Kitefliers Association was just getting started — information, ideas, and innovations were passed back and forth throughout the kiting community through the mail. Greger was especially prolific in here correspondence, and as she explored her kiting ideas with the likes Bob Ingraham, Dave Checkley, Stormy Weathers, and many others, she kept detailed copies of each interaction, carefully filing all correspondence and her carbon copy replies. “Margaret is amazingly articulate,” explains Drachen director Ali Fujino, “her letters are more like little essays full of substantive text and ideas”.

Editor’s Note: While we did not know Margaret personally here in the Kitelife offices, her influence is clear, and she will be dearly missed by the kiting community.

Encouragement, kindness and optimism to friends and stranger alike, a
love for her family and a sense of humor made up her life. Attention to
family, kites and wild flowers were foremost in the life of Magaret Greger.

Margaret (Haun) Greger was born on Dec. 6, 1923, to parents Henry and
Elizabeth Haun in Harrisburg, Nebraska. During her teen years, she won
awards for spelling and broad jump. After graduating from high school
as Valedictorian, she began working for a local newspaper. She then
learned to operate a linotype machine and set type for printing,
eventually becoming a member of the Typographical Union. After the war,
she completed journalism classes at the University of Nebraska in Lincoln.

At the University, she met George (Greg) Greger, a GI Bill student who
had returned from service overseas. They were married on April 4, 1947.
After his graduation, they journeyed to New York City. Upon checking
in with the Typographical Union, she was immediately placed on a job
with one of the city newspapers. Friends were impressed that she had
gotten a good job so quickly.

In 1950, they moved to Richland where her husband began employment at
the Hanford Project under General Electric. They moved to the present
address of 1425 Marshall Ave., Richland in 1947. Neighborhood kids
enjoyed the Greger backyard playhouses and the reliable supply of
cookies and homemade root beer. The neighborhood kids were aware that
if they had a notion to drag 60 tumbleweeds into the backyard to
construct a huge tumbleweed igloo, then Margaret Greger would be fine
with it. Once anyway.

Margaret was active in both the Catholic Church affairs and the
Democratic Party. In the 1960s she advocated for civil rights in the
Tri-Cities. She helped with Scouts and was a Brownie Group leader.
Margaret enjoyed the Native Plant Society wildflower trips and served
the Audubon Society as its librarian for many years. 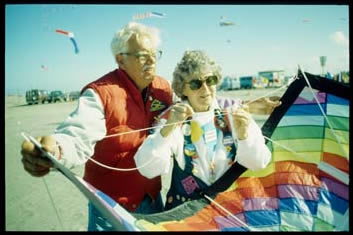 Margaret was devoted to kite flying and kite making as a major passion,
teaching classes, writing articles and authoring five books. Her books
“Kites for Everyone” and “More Kites for Everyone” are prized by kite
makers and teachers worldwide. Her goal was for students with no
experience to be able to efficiently make a high quality kite using
easily obtainable materials and to enjoy flying them on completion.

In 1996, she was named American Kite Magazine’s Kite Person of the Year.
The tribute article stated that she had taught thousands of adults and
kids how to make and fly kites over forty years of dedication to the
craft. In 2002, Margaret was inducted into the World Kite Museum’s
Hall of Fame.

As a remembrance, we suggest readers fly a kite in that empty space in
the sky. In lieu of flowers, it is suggested a donation in her honor be
made to a group with which she worked and supported.

You may express your thoughts and memories in the online guest book on the
Einan’s Funeral Home web site.

The funeral Mass will be on Saturday, March 21st at 11:00 a.m. at Christ
the King Catholic Church in Richland with a remembrance reception to
follow in the gathering place of the church.