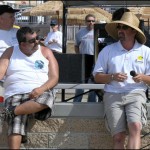 One of the first events of the year, known for good weather and a relaxing format, Kite Party in Huntington Beach has drawn fliers from all over the world since the first time it was held in 2003… This year marked the 7th annual Kite Party, passionately organized by Dave Shenkman of The Kite Connection since day one.

I’m horrible with names, but suffice it to say that we saw fliers coming from as far away as England and from all over the United States, many of them coming to the sunny Los Angeles area from 30, 20, 10 degree tempuratures or even colder… One of the many reasons this is such a popular event, hard to beat the climate, venue and variety of kites one can enjoy at Kite Party.

The award for furthest traveled goes to Brian (Big Bri) & Deb Williamson, and Jeremy Knight (Sailor99), all of whom came from England for their first American kite event… Great folks, avid Rev fliers, I’m glad they had a chance to visit. 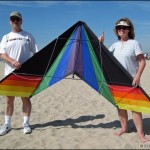 This event always promises a bevy of classic kites and familiar faces, including Pam Kirk and Mike Dennis of Heads Up Kites… While they’re full time sailmakers now, they’re also well known in the kiting community as members of the now defunct Team Top Of The Line (TOTL) along with Don Tabor and Ron Reich, they earned many top national and world competition awards, both as a team and individually.

Of course, being so close to San Diego, there was a big Revolution flier turnout… It was clear that even with iQuad’s absence this year, the Rev community is thriving and growing all on its own, great to see all around.

Joined by his cohorts on Team 180GO! and most of the other Rev fliers, Mike Kory led his IKE (Illinois Kite Enthusiasts) and other pilots through team exercises throughout the weekend, we also saw Mark Lummas pick up the reins several times as well as a couple of other brave folks who are still getting the hang of it.

Quad team flying is always such a howl, with a good humored and relaxed environment… I only called for a few minutes over the whole weekend, but rather enjoyed following others for a while and actually being able to watch a group fly rather than be leading the entire time.

Without the rest of my teammates, I found a great deal more time to just fly, chatting with other fliers I often don’t get a chance to interact with, both as myself and as a representative of both Kitelife and Revolution… I was pretty low key on Thursday, Friday and Saturday, flying mostly Revs and playing around.

Of course, being one of the first events of the year, Kite Party often offers an early look at some of the new designs that are coming out with so many skilled pilots, designers, manufacturers and retailers all in one place. 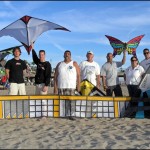 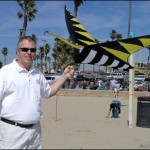 On the retail side of things, we saw Jay Knerr of the Kite Loft come all the way out from his home in Maryland, Corey Jensen of WindPower Sports in Las Vegas, and Hunter Brown sharing duties between Focus Kites and his own retail store called Blowing in the Wind… While Mr. Shenkman has his own store, he always goes out of his way to recognize everyone who comes to Kite Party, even representatives from kite stores in other parts of the country.

Friday night found us enjoying a Mediterranean dinner at Coach’s for a brief meet and greet, a loose pilots meeting, general greetings to everyone from the organizer, and some provoking discussion regarding the future of the event.

Saturday night found us having our annual dinner and auction at Lampost Pizza, great hoots and howls assisted by good grubs, beer and the more humorous folks (errrr chaps) like Big Bri who kept everyone in stitches throughout the evening… It’s the personalities that really make this event what it is, as well as location, location, location. 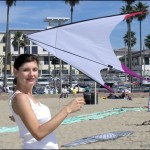 A big hit at the event, the Skate and Manta kites being produced by Focus Kites – one of the simplest designs on the beach, these kites were pretty much the only thing flying for a good portion of Sunday morning when the winds dropped down a bit… Feather light and incredibly easy to fly, we’ve been seeing more and more of these both indoors and out.

Sunday morning I had a serious hankering for some dual line flying, and for the first time, I finally got some quality time on the Exile by Ken McNeil, which turned out to be really good for scratching that particular itch. 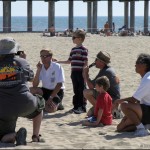 We saw the return of a fund-raising effort with easy flyer kites for sale to the general public, where they are invited to come down onto the main field and fly them with everyone for nearly an hour with all proceeds going to a worthwhile charity… Ben was assisted by organizer Dave Shenkman, Dave’s son Nicholas, Ron Despojado, and a very proud father in Mark Lummas, as well as countless fliers walking around and helping people get airborne.

One of my personal favorite kite personalities that I’ve enjoyed at events all over America, Ron Gibian had a strong presence with his new Masterpiece Revolution series, a wide variety of single lines and a particularly glorious arch… Ron’s distinct style and color choices always leave me drooling! Come to think of it, I have one of his “Rug” kites mounted on the wall over my bed. <grin>

There are talks of a much bigger event next year thanks to potential support from new sponsors, all of which may lead to expanding to include the south side of the pier and a great deal more flying space… However, Dave is very conscious of the intimate and friendly feel that Kite Party has always had, and that he’ll do everything he can to preserve it.

Whether Kite Party covers a full mile of beach or if we’re all crammed into one little field, this is a top notch event with an experienced and fun organizer behind it… After my experience at this years event, I’ll be doing everything in my power to make sure I see you all there year after year. <grin>