We first saw this kite bobbing over the boardwalk at Ocean City, Maryland during the 1998 Maryland International Kite Expo. Strolling underneath was its genial maker, Lee Sedgwick of Erie, Pennsylvania. The shiny kite had concave spars bowed out of each end and a sliding bridle that enabled him to roll and bounce it over the ground and tumble and flick it around the sky, almost like a fighter kite.

When Sedgwick donated his kite to the auction at the Ocean City event, Mel Govig bought it and was pleased when the maker agreed to permit us to reproduce the plans.

Sedgwick makes no claim to originating the kite. In fact, tracking the trail of the cube kite proves again how good kite ideas bounce around.

Sedgwick traces his knowledge of the cube back to Alix Martin of New York City, who was selling a few similar kites at the 1997 AKA convention in Wildwood, New Jersey. She, however, had scaled up her kites from a two-inch tumbling cube made by Charlie Sotich of Chicago, Illinois. That little kite was auctioned at the 1991 AKA convention in Jacksonville, Florida to David Klein, owner of Big City Kites in New York City, who showed it to Martin.

However, some years ago we published a photo from Gubbio, Italy (Winter, 1991-92) of a much larger cube kite decorated as a gambling die, being shown by Thorsten Schacht of Denmark (who is one-third of the team known as Dr. Hvirvelvind). And plans for a quite similar dice kite, about one meter square, appear in the 1995 book, Box Kites: Making and Flying, by Dr. Bill Cochrane. Finally, at the 1999 AKA Convention in Muncie, Indiana, we discovered our friend Barbara Hall flying two small dice kites branching from one line, which she had made in salute to the gambling mecca of Atlantic City, New Jersey, near her home. 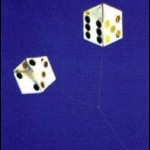 On left, variations on the one-cell theme: a pair of dice kites made and flown by Barbara Hall at the AKA convention in Muncie, Indiana.

The kite “took off” commercially in 1998, after the Shanti Kite Company negotiated with Martin for rights to make her box. The single-cell market niche now also includes the Triad and the PopKan. (See our reviews of the Cube and Triad in Kite Lines, Spring 1999, and of the PopKan in this issue.) 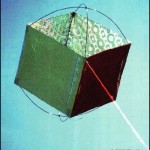 Sedgwick was drawn to the design in an ongoing search for a fighter kite that would relaunch from any position on the ground, and guessed that the sliding bridle would be the key. (Kite Lines first documented the use of such a system in the “convertible cubics” of Japan’s Takaji Kuroda, Fall. 1980.) Sedgwick made his kite from four textures of metalized Mylar®, all silver except for one side in red. But he notes the kite could be made from an array of solid hues, or even just a single sheet of material. And while Mylar works well, “almost anything” can be adapted as sail material (ripstop, Ty-vek®, tissue). Further, he has seen other makers use wood dowels and even drinking straws as spar material. 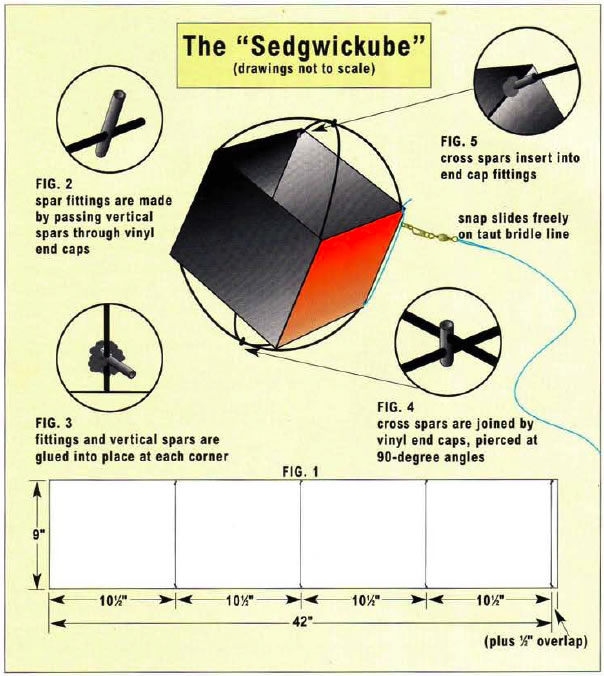 Attach flying line directly to the fishing snap, or use another snap swivel on the end of the flying line. When the line goes slack or unusual gusts strike the kite, the sliding fishing snap allows the kite to flip over and fly “upside down.”

Sedgwick recommends using 20-lb-test line for the first 10 feet, then 30- to 90- lb-test for the rest of the line. He says the lighter line near the kite makes it float better. He also suggests the kite flies best on only 40 or 50 feet of line, with the line fully extended from the spool. In our experience, gentle pumping of the spool is enough to make the kite do its thing.

The maker also has experimented with tying a line through the center of the box between the junctions of the cross-spars, to increase tension for sharper movement. Sedgwick says this kite keeps offering him new games to play.

“The kite is awesome,” he says. “You can fly it at night, indoors or out, in low wind or high.”