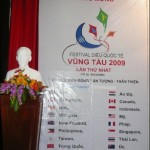 Invitations to “The Dance of the East Sea” came in late-February. This was the first large international festival organized in Vietnam and we quickly accepted. We had to! Departure was about three weeks away and airline seats were going fast!

As it turned out, our electronic visas arrived 15 minutes before we left the house – at 3:30 a.m. for the 6 o’clock flight. 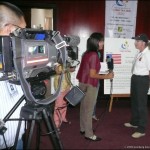 Susie and I arrived in Ho Chi Mihn City (Saigon) at 9 pm after 30 hours in transit. We were met with smiles and flowers and a roomy van to drive us three hours south to our hotel base in Vung Tau.

At breakfast, we learned that the fliers were spread over three hotels roughly a mile apart. That meant our time with kite friends would be limited. We spent day one getting oriented, tracking people down, and attending a flier briefing that detailed the overall plan and schedule changes. 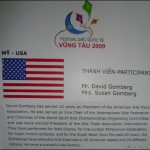 Most participants came from members of the ASEAN kite council and included Cambodia, Thailand, Indonesia, the Philippines, Malaysia, Singapore and China. England and France were represented by fliers living in Asia. A strong New Zealand contingent arrived with a bonus German in their group. Australia was well represented. Canada and India had one delegate each and the USA had two.

For a first-time event, the plan was ambitious. On day two, the festival opened with a large, well attended press conference. Organizers and dignitaries made speeches, and fliers were interviewed. A photo of Kevin and Linda Sanders and Susan was flashed around the country.

The conference was followed by an outdoor exhibition in beachside pavilions. Between one and four, each country set up a display, staffed it, and then tore down. We then packed everything and boarded busses for the next stop – the delightful Ho Tram Beach Resort.

We arrived in Ho Tram at dusk, checked into our rooms, and then headed for the beach and the first actual flying of the festival. Winds were warm and fresh – ideal for a night show. When we left the field, some fliers kept their kites in the air expecting they might still be there the next morning.

The traditional Kites of Vietnam were high aspect with curved trailing and leading edges. They were unstable in the sky – almost like a fighter. And the distinguishing feature was a tier of flutes that generated a low harmonic whistle as they moved across the sky.

Plenty of media covered our flying the morning of day three. It was a great and varied show in a tight flying space. Mix kiters from 17 different nations or cultures, and you get an interesting sky – but not necessarily an easy one to fly in. Still, everyone interacted well. If only countries acted like kiters!

Enthused volunteers helped relaunch and untangle, and after just a few hours, seemed equally happy to carry our bags off the beach and to the busses for the trip back to Vung Tau. We were due on the field first thing in the morning.

The Vung Tau beach is long and narrow. Off shore breezes worked well enough when the tide was out. But then of course it came back in.

At the briefing earlier in the week, we had drawn lots for flying space and a USA flag and a shade umbrella was waiting for us on the sand. But leave your shade for a moment and when you looked back, the public would have moved in to avoid the heat!

The schedule for day four detailed flying from 8:30 to 11 a.m. Not coincidentally, that morning show coincided with low tide and the cooler part of the day. 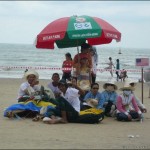 Crowds were enormous. Later, the news would report 200,000 spectators in attendance. Marked field and uniformed security helped keep things sane. But they left on schedule with the tide, and we got waves of water from one side and waves of people from the other. Everyone asked why we were leaving and we pointed to the surf now submerging our anchors.

Once again, we packed gear off a field and back to a hotel. We cleaned up, cooled down and prepared for a second night show.

Most of you know Susie and I are not big night-fly fans. They usually come at the end of a long flying day, suffer poor winds, and then you get to pack-up in the dark. So it says something when I tell you this one was well organized and executed.

Guest fliers had kites in the air to augment an excellent choreographed program. The featured performer was Lam Hoac of Canada. Lam was born in Vietnam and was returning for the first time.

Day five, we returned to the beach for our sixth brief flying show. It wrapped at 11 and we left gear with our guides while we ran hot, dusty and perspiring to the closing ceremonies.

Each delegation received flowers, a trophy, and an award for special achievement. 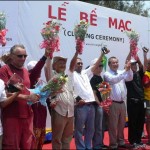 We then returned to our respective hotels to pack for the trip home.

Shopping was a challenge in Vietnam. With the dong at 20,000 to the dollar, you had to count the zeros with every purchase.

Susan and I had planned one extra day in Ho Chi Mihn City for a bit of sightseeing. Options included Mekong Delta boat tours, shopping trips, or an excursion to the nearby tunnel systems. A six a.m. flight meant a three o’clock hotel departure, so we made it an early night.

We’re flying home now and ready to sleep in our own beds again. But we were pleased and honored to be a part of this first international Vietnamese festival. 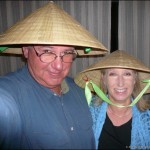 We were impressed with the attention to detail, the efforts made by organizers, and the huge, appreciative crowds. Fields were sometimes cramped and there was a lot of moving around and gear lugging involved. But the warm and friendly reception made an absolute impression.

We were grateful to be there and would be pleased to get invited back! If you get the chance, defitinely go to Vietnam. If it helps, I can loan to 50,000 dong….