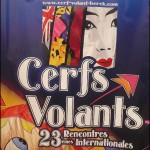 My first morning in France, I went down to breakfast and asked for an omelet. The one they brought was very small. I asked the waiter and he told me they only used one egg. “After all”, he said, “in France, one egg is un oeuf(enough)!

I’m back in Berck. The kites, the kite fliers, the weather, and the crowds are all spectacular. The beach is huge, and when the tide goes out, you can almost walk to England.

This is my 19th visit to the ten day festival. I wouldn’t miss it! Some kite events are competitions. Some assemble exhibitions from kiters around the world. Some feature art kites. And some spotlight musical demonstrations with maneuverable kites. Berck does all of that. But even more, Berck is the finest assembly of show kites that I’ve seen at any festival among my travels.

Because the festival covers two weekend, I usually do two Updates. Check back next week for an expose of the enormous and fascinating kites being flown here. Meanwhile, let me present some images of the exquisite art pieces being showcased in the pavilions.

Along the promenade, a large tent introduces the works of Martine Chatel (France), Daniela Zitzmann (Austria), Etienne Veyres (France) and Frances Anderson (UK). Handmade papers, foils, decorative yarns, and dried flowers and leaves have been assembled to create amazing small pieces that each have somthing in common. They are each bridled and each fly! Amazing stuff!

Further down the walkway, another large tent introduces the historical reproductions of Christian Kolz (Germany). These are large kites, each lovingly crafted with original materials and attention to authentic detail.

There is a webcam overlooking the beach. But unfortunately, it points right at the area where kites are anchored and not where they are being flown. And of course, if you are in the States, we start flying at midnight Pacific time, and knock off about 8 in the morning your time….

If you interested of a short video from the first weekend of the festival, click here. (I like the report from the 20th at about the six-and-a-half minute mark.) 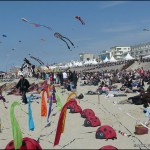 I’ve been going to Berck for 19 years. I’ve watched it thrive and grow into one of the great spectacle kite events of the world. And each year, I continue to be amazed by the kites, and by the crowds.

Unofficial reports at the end of the ten-day event indicated over 600,000 people attended. The streets were mobbed, the restaurants were packed. and the lines at the toilets insufferable. Fortunately, anyone with a kiter badge got special treatement.

In the main arena, sport kite and quad teams rotated before the crowds with musical performances. In the northern field, fifty kiters ran lines to showcase individual creations. The Berck webcam aimed generally in that direction.

Here are a few shots of kites that will amaze you. As I’ve done before in Berck Updates, the thumbnail is just a teaser to get you thinking about the larger image.

For a few other photo galleries, check Bernhard Dingwirth or Andrew Beatty.

New on the field this year was a French Manlifting Exhibition. Using a pair of solid cement anchors, and a powerful winch for line control, the group lofted a series of large Saconney kites. A “liftee” was then harnessed into the line with two connection points — one for lift and another for safety. With the winds steady at 15, the team member rose easily into the sky.

Later in the day, organizer Gerard Clement took a turn in the harness. Most people far away at the seawall couldn’t see enough to appreciate the feat. But we kiters on the beach were well impressed.

A ten day event allows lots of time for the fliers to socialize or share flying techniques. Andrew Beattie and I have been talking about large kite anchors for several years and I was able to get some of his views on video.

Andrew was set up directly downwind of where Peter Lynn and I spent the week. So he was acutely aware of any anchor weaknesses we might suffer.

One other small event was noted as Berck wound to a close. On Friday evening, the fliers and city officials gathered for dinner and speeches. This year the Mayor decided to issue a gold city medal to a kiter. I was surprised and honored to receive this first award from the city (Organizer Gerard Clement was similarly honored last year.)

In presenting the award, the mayor noted my 19 consecutive years of attendance from overseas, my role in organizing the World Sport Kite Championships, and the attention my Updates have brought to the festival. I congratulated the city on how the festival has grown into a world class event, how gracious the local people are to visitors, and I accepted the medal proudly on behalf of all the fliers. 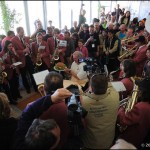 They asked if anything could be done better. This was a cue for a long running joke I have with Gerard. “Your restaurants are very fine”, I said. “But I’ve been unable to locate a good cheeseburger….”

Berck got the last laugh, however. On Sunday at lunch, a special table was prepared with linen and silverware. With speeches, a marching band, and much fanfare, a 7 pound cheeseburger was delivered to my table. Took me over an hour to consume, but it was the best cheeseburger I’ve ever had! Merci beacoup!!