Last year when I trundled off to Grand Haven for the 21st Annual Great Lakes Kite Festival, I faced a weather forecast that was threatening rain for all 3 days. Nicely, this wasn’t how it turned out and this year’s forecast was decidedly better, thus I crossed my fingers and sincerely hoped the weather people were correct in their guesses for this year.

This year, we did the trip a little differently, opting to land in Chicago and drive over from there. Slightly more economical and really, given Grand Rapids is a few hours away from Grand Haven, very little difference time-wise. And really, who can argue with the fun of having iQuad and Ben D’Antonio locked in a van for three hours! (No, in all seriousness, it was a fun drive.) We rolled in about 10pm and off to bed we went for an early start on Friday.

Friday morning brought an interesting sight, the local neighborhood turkeys. And, these are famous turkeys too! Known around the US for an “attack” on a local mailman recently, we ventured forth into the yard with a little fear and trepidation.

Obviously, these were not birds to be toyed with on any level, but, despite this, we found them to be pretty laid back and they didn’t bother us at all. PHEW!  Perhaps they recognized kinship with iQuad?

In year’s past, Friday was usually a full slate of events throughout the day down on the lake with demos going on all day long but this year, Steve and Mackinaw decided to drop that approach so it was mostly a free day down on the beach! Both Zach Gordon and iQuad ran seminars in the afternoon, with us covering quad kite flying and Zach doing two clinics on dual line flying. While it was a cloudy day and inconsistent winds, it was still a lot of fun! That left time for a quick bite to eat (Let me highly recommend Bob’s Beach Burritos!) and then it was off to the indoor.

This part of the festival seems to get busier every year! This year, the bleachers were packed with people and they spilled out into the hall as well. Steve Negen’s promo work on this meant a full house to see indoor kite demos by Sam Ritter, Lee Sedgewick (with two little helpers for one part), myself, John Barresi, Steve DeRooy (with Bazzer as a cheering section), Terry McPherson, his friend Ken (who’s last name is eluding me), Paul De Bakker and last, but, certainly not least, Lisa Willoughby. Phew, this is me hoping I didn’t leave anyone out on this list.

Most of us did at least two demos out there to the great entertainment of the crowd. Maybe next year, we’ll move to an even larger indoor space, if one exists in Grand Haven? If not, the existing one works very well as it is!

Saturday started out as a noticeably windy day early on and really, it pretty much stayed that way all day. While it wasn’t the grounding ballistic winds we experienced on the Sunday last year in Grand Haven, it was 15 – 25 mph all day long, so, flyable but, certainly a challenge to fly in even with the right equipment. And, it didn’t stop anyone from flying. 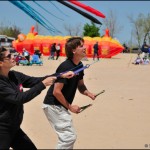 All the people mentioned above spent the day demoing, as well as the addition of Chicago Fire, The Detroit Windjammers, Dave Bush, Lisa Willoughby, Paul DeBakker. the Gordon brothers and the Skyjesters. Ben and Chris Schultz from HQ were kept busy all day long teaching people how to fly either Revs or the HQ power kites, and despite the wind (Ben managed this with a gorgeous Rev custom done by Eliot Shook, composed of weaved fabric strips), the sun was out and the people who came down to the park had an excellent show all day long. I don’t recall seeing anything broken, so there’s a definite plus on a very windy day! But one thing the high winds during the day meant was that it’d be likely there’d be at least some wind in the evening for the Night Fly.

We even snuck in some demos as iQuad, testing out our new Back in Black routine in the the unusually high winds… Days like this, makes you glad to be a quad flier, as the dual line folks are working way harder to maintain speed control, spacing, etc… Our hats off to all the performers who put on a show in the difficult conditions.

Ah night flys! Such a hit or miss prospect really. I’ve done a few now and a couple of things become apparent very quickly. First, make sure you have all your ducks in a row. The last place you’d want to spend time sorting out a bridle or line issue in on a beach, in the dark. Secondly, a good amount of wind. Thankfully, this time we had both of these things in place and it worked out pretty well overall. The Detroit Windjammers were even down with a solid white set of their kites.  I don’t have the best night vision around so I didn’t manage to spend as much time in the air as the other three iQuadettes but, it was certainly fun and the assembled crowd really enjoyed seeing a handful of lit up kites playing around in the sky. We even had some music going for it! This was the first time in our three jaunts to Grand Haven that we’d made it out to the night fly but, I think we’ll do it again next year, it worked out well.

Sunday morning, after our early pow wow with the Turkeys Of Slayton, we headed back down to the beach, to start what would be one of the nicest weather days I have ever had at the festival. Beautiful sunshiney skies and a day that was pretty much somewhere between 6 and 12 mphs all day long. It doesn’t come much better than that, and again the spectators were treated to a full day of demo flying from the assembled flyers, including some especially spectacular Rev stack flying by Lee Sedgwick and Sam Ritter.

Ben and Chris kept people hopping over in the learn to fly fields and all kinds of kites, from Al Sparling, David and Susan Gomberg on the big inflatables at the north end of the field to the single lines kids bought in what becomes one of the largest kite stores on the continent for three days every year, nobody had any issues keeping kites in the air. It was a wee bit chilly but, given some ends of Canada were still seeing snow that weekend, you sure wouldn’t have seen me complaining at all, it just required a jacket or two most of the time. If only every day could be so picture perfect of a day to fly in!