– Click here to read this report in Japanese –
日本語はこちら 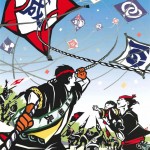 The Hamamatsu Festival, held annually from May 3rd – 5th in Hamamatsu, Shizuoka, is one of Japan’s leading festivals and attracts approximately 2 million people each year. For the three days of the festival the city is filled with excitement as a host of different events take place. During the day epic kite battles are held at the Nakatajima Sand Dunes, while as night falls the action moves downtown, where spectacular floats are paraded through the streets. Spectators can also enjoy displays of regional folk crafts, marching brass bands and a Miss Hamamatsu Festival contest, among other attractions.

This kite-flying festival is said to have originated over 440 years ago when the then Lord of Hikuma Castle, who ruled Hamamatsu and the surrounding area, raised a kite in celebration of the birth of his first son. However, there is little documentary evidence to support this legend.

References to kite flying in the region appear in historical documents dating from 1789-1800. Indeed, the climate of the region, with its strong, blustery wind known as Ensh? karakkaze, is well-suited to kite flying and the practice of raising a kite to celebrate the birth of one’s child is a tradition deeply rooted in the region.

An explosion of fireworks over the Nakatajima Sand Dunes is the signal for over 170 kites, each bearing the unique crest of a local neighbourhood, to be raised into the May skies. The first kites to be raised, known as hatsudako, are those celebrating the birth of a firstborn child. The firstborns, dressed in traditional festival dress, also have a leading role to play watching their kites fly from the safety of their fathers’ arms. Then, urged on by the sound of the bugles, hundreds of people pile in for the kite battles.

In the epic kite battles, opposing neighbourhoods entangle their 5mm-thick hemp kite-lines in an attempt to cut through the other kite-lines using friction. The friction burns the kite-lines, producing white smoke and a smell of burning. Meanwhile, both skill and wind are required to keep the kites aloft. Ripples of excitement spread from the surrounding spectators, gradually building to a roar as all are caught up in the frenzy of the battles. 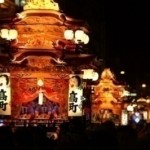 Over 80 neighbourhoods compete to have the most spectacular goten yatai (palace-like float) in the float parades which illuminate the downtown area. It is said that long ago people used to make bottomless floats and parade alongside them to welcome back the young men returning from the kite battles, and it is thought that the float parades have their origins in this tradition. Since then it has become common for children playing flutes and drums to ride on the floats which have become increasingly elaborate, with many featuring spectacular carvings.

As night falls the floats move off to the accompaniment of samisens plucked by experienced festival veterans, flutes blown by children dressed in festival finery and drums beaten by children aboard the floats. The festival approaches its climax as the drums and flutes play out into the night. 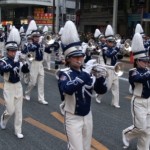 During the festival a whole host of events are held at a range of venues in downtown Hamamatsu. One of the most popular events is the parade of marching brass bands, a particularly appropriate event for Hamamatsu, which is known as the City of Music.

The brass band parade along Kajimachi-d?ri, Hamamatsu’s main street, is well-established as one of the centrepieces of the festival. A number of other events, enjoyed by residents and visitors alike, are held at ACT City and Zaza City.

A Beginner’s Guide to Hamamatsu Festival

Drums
Neighbourhood teams use drums to give many different signals e.g. to set the rhythm to which the men pull the kite-lines, but they are used primarily as a means of cheering on those flying the kites.

Bugles
The kite fliers change their rhythm according to the sounds of the bugles, which also serve to spur them on.

Itowaku
The itowaku is a large reel used to wind in the thick kite-lines needed to fly the large kites.

Tegi
This is a pulley-like tool used to wind in the main kite-line. It is needed because the kite-lines become hot due to friction during the battles. 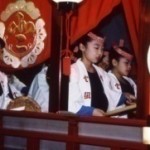 The ohayashi(music performed by bands of children aboard the floats) is another unique feature of the festival. Unlike the music at most regional festivals, the ohayashi performed at the Hamamatsu Festival is the same as that performed in kabuki (traditional Japanese theatre). Bands from different neighbourhoods often perform music traditionally used to accompany kabuki or Japanese dance performances.

The neriis a parade in which the leading person carries the neighbourhood flag, followed by sometimes

dozens of lantern bearers. The spirited parades advance to the rousing call of the bugles, the beat of the drums and the constant cry of “Oicho, oicho” until they reach fever pitch, with the various neri jostling and pushing as they wind themselves around each other to form a swirling frenzy of festive excitement.

This information counter provides information on tourism in Hamamatsu and Western Shizuoka prefecture. There are English-speaking staff on hand at the Information Centre, which also arranges tours led by volunteer guides.

After the festival of Uchinada came to a close, we moved from our hotel there (Kanazawa Station) to Hamamatsu before the day was finished. Our group of 11 members changed the train twice (Maibara St. and Nagoya St.), arriving at Hamamatsu Station four hours later.

Arriving somewhat late in the evening, we went to bed early after securing a snack because we were very tired. Trumpets and drumbeats of the Hamamatsu Festival, and other peculiar rhythms of late night celebration could be heard till a late hour, coming from all over the city. When we awoke the next morning, the sky was clear though drizzle had fallen overnight.

Many of the people who were staying at our hotel had come from the all over Japan to see the Hamamatsu festival, and I spoke with one man who had come from my hometown of Niigata. He told me that he’d come to see this festival with 24 friends. Also, in his hometown, kite flying is very popular, and he comes to Hamamatsu to see the festival every year.

The fliers and spectators were very excited because it was the final day, even though it was raining (much to our regret). In Japan on May 5th, people celebrate for boy’s growth, and hold various events. They call it “Children’s Day” (national holiday).

All children and adults, dressed in matching each community’s Happi coat (Festival jacket), they arrive in front of the Hamamatsu festival pavilion near the kite flying field, one after another by bus, and they march toward the kite field sounding their trumpets and drums, forming a line.

At the Hamamatsu festival, people flew their own community’s kite (designed from community crest and name, etc) with best wishes for newborn baby’s health and happiness. It is said that the origin for this tradition came from the lord in Hamamatsu 430 years ago, who flew the kite to celebrate their son’s birth. It means it is good for the baby’s luck for the kite to rise high, this kite is called the first kite, and the child’s birth is celebrated in the whole of the community.? The Hamamatsu festival has no relation to the primary religions (Shintoism, Buddhism, etc) though many of other similarly timed festivals of Japan are related to the religion. It is a festival of the municipal organization. This means the all of citizens can participate.

A total of 174 teams participated in the kite battle, with a total of 1.48 million spectators over three days. To our regret, the kite battle didn’t happen on the day of our visit because of rain and very light winds. However, the kite field was still joyous in its celebration, and broke out in cheers every time a team would loft their kite into the light breezes.

Because kite battle is dangerous in principle, the spectator cannot fly a kite, and is not allowed onto the main battlefield. However, as guests, we fortunately had the chance will fly one of these traditional kites. We were given cotton work gloves to protect our hands, and had been directed by the supervisor, “Grip the string firmly.” With this, we began to pull and saw the kite-line in time with the chanting around us. The power was tremendous! I didn’t know the strength and pull of these kites, as my previous experience was only with sport kites.  During our flight, children had been chorusing US President Obama’s words “YES WE CAN” while we were pulling and sawing with the kite-line. I think we were at it for a full 2 or 3 minutes. What a truly surprising experience!

Rain had strengthened throughout the day, so we moved back to the Hamamatsu festival pavilion. We are able to see the many kind of Japanese kites and learn about the history of Hamamatsu festival, their nighttime float parades as well as additional insights into the traditional kite battle and a special exhibit dedicated to their special kite-line (about 1600m for one kite), the raw materials (hemp), and kite battle videos.

The traditional kite-line (about 5mm in diameter) is made of raw and natural hemp material, and is made only in the Hamamatsu festival pavilion.

Combatants and teams make the kite-line in the festival pavilion for the entire year before, just for this festival of three days. One reel of kite-line holds 200m in length, and 8 reels are prepared for each kite. On display in the museum were sample kite-lines that had been cut by the frictional force on these battles, because during the kite battle, the kite line is cut only by the frictional force. With such wet conditions this year, many of the teams covered their reels with vinyl on the field to maintain its quality.

One very interesting exhibit was newspaper clipping and historic information about the kite that was cut in the skies over Hamamatsu and floated all the way to Chiba Prefecture, near Tokyo. There is a distance of about 200km from Hamamatsu to Chiba!

This kite was reported by newspapers of the day, and was also featured on television broadcasts. The newspaper and related photographs have been exhibited in the pavilion now, although the kite itself seems to have been lost.  How did they realize that this one was a Hamamatsu kite? The woman who found the kite at its point of landing was originally from Hamamatsu, so she recognized it as a Hamamatsu kite immediately. What a wonderful coincidence!

I’m really glad to have had this opportunity to meet everyone, including local notable Japanese kite fliers and the international guests who we shared this journey with. I’ve been left with such happy feelings, what a wonderful great trip!

Additionally, I offer my sincerest gratitude and appreciation to Mr. Masaaki Modegi (JKA Chairman) and to the JKA directors as well.