Maryland International Kite Festival, the last weekend of April, was a perfect event in every way!  The fact that there was no sport kite competition planned, allowed for a very “laid back” atmosphere.   No one was pressed for time, so everyone could leisurely fly, enjoy the many demos, including iQuad, and enjoy the gorgeous weather.  Except for some thunderstorms off in the distance, Saturday night (which, I bet, not many noticed), there were mostly blue skies and  good winds all weekend. 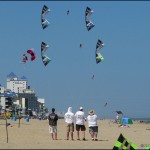 We arrived Friday morning to glorious blue skies and  smooth winds of  about 12 mph or so.  The King’s large and beautiful kites greeted us; what a cool sight!   iQuad, was in action with Barry “Bazzer” Poulter calling for teammates Steve de Rooy, Adrian Flanagan and JD Fabich.  They looked great and added much pizzazz to the many SLK’s coloring the sky.

Dave Hadzicki, one of the brothers responsible for the creation of the Revolution Kites was already on the beach giving lessons to people interested in trying to fly these beauties.   There were a decent amount of Rev flyers which allowed for some cool team flying.  Scott Weider did the calling and some teaching.  Our youngest team flyer was Garrett (10 years old, I think).  He did a great job for his first team fly, keep up the great work! 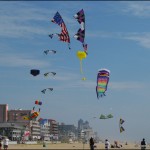 Was a spectacular day for everyone.    The Rev flyers started the day on a solemn note as we all flew with black ribbon on our kites to pay our respects to a fellow Rev flyer, Rich Comras, who’s father  passed away the day before he was to attend this festival.

The sky was filled with all sizes and shapes of single line kites, lots of  Revolution quad line kites and dual line kites, too.  The colors were so vivid against the deep blue skies and  white, puffy clouds.

The highlight of the afternoon was the Rev Games.  The first game was knocking balls off of thin poles, using the Rev and zigzagging back and forth in the fastest time.

Scott Weider won that event.   The next game was flying to various spots, landing specifically the way the rules called for, BLINDFOLDED!  We each had someone tell us what to do:  flip it over, slide to the left, etc.  It is not easy!  Cath Shook can proudly say that she beat a National Champion Flyer, Scott Weider…. blindfolded!  The final game was landing in various spots, on the tip and going to the next spot and landing on the other tip, after doing a 180 degree turn.  I was one of the last  pilots to do this and did it in 14 seconds, so I thought I finally won one of these games…. Not!

Scott Weider did it in 13 seconds to win his second event of the day. He won the trophy for the Rev Games M.V.P. of the day. Way to go Scott…. I will get you next time!

Ben doing the 180 tip pivots touch downs (although he did 360’s instead!).
Scott Weider is Doug Coate’s “eyes” as he coaches him while Jeff times him.

As I panned around to enjoy the many sights, here’s a few images of what I saw.

We had a great team fly with iQuad and Dave Hadzicki on the line, Scott Weider did the calling. It was a lot of fun and we laughed our butts off!

The dinner and auction was held at Shenanigan’s. There was great food and more importantly, great company. Scott Weider was awarded his trophy for the Rev Games and many kites and related goodies were auctioned off. Here’s a few photos from the evening.

Personally speaking, it’s an especially cool thing to fly kites with folks from all over the country and world, and then hang out, break bread, and laugh with such a great group of people. Thanks for so many great moments and much laughter!

After dinner and the auction, I found myself across the street, back at the beach, flying a Rev with some of the guys. What a perfect ending to a truly great day! 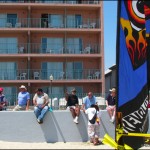 I heard there was some swirly wind very early in the morning. By 8:00 a.m., there was none. It also had heated up to the upper 80’s… at the very least!

Around 11 am, we were all waiting for some action, when there was a loud rush of water sound. It turned out to be the ocean kicking up some waves and ushering in some on shore wind. Everyone cheered on the wind and the much needed breeze. Unfortunately, it was just a tease! It was at least another hour until the winds started to blow and not let up. When it started, so did the demos. There were many, but I have to give some big “props” to Dodd Gross who really “brought it ”when there was very light winds!!! Steve de Rooy, my man! … he rocked it, flying two Revs at once and did an absolutely amazing routine. Scott Weider did a great routine, as well, with a side slide that went on for about 180 degrees, including up and over a fence… very cool!!! Of course, there was a very cool routine from iQuad, as well.

Another big event for the day was the Mega Fly. There were 14 pilots on the line, including Scott Weider, who lead, myself, Adrian Flanagan (iQuad), Adventure Ang, Rich Hawthorne, Lisa Willoughby, Bob Wu, Steve de Rooy (iQuad), Barry “Bazzer” Poulter (iQuad), Jim Ferreira, Eliot Shook, JD Fabich (iQuad), Ben D’Antonio, and we performed some really cool moves. There were tons of applause from the spectators and even some “oooohs and aaaaaaaahs” from the flyers! 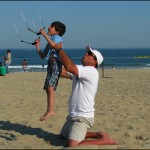 A special moment after the mega fly was watching Dave Hadzicki give some lessons. It was especially sweet watching him teach this little guy, maybe four years old to fly a Rev.

Some of us “die hards” hung out on the beach flying team, and flying a Powerblast. It was tough to leave the beach, but had to as it was getting dark.

We ended the evening and weekend, for that matter, hanging out in Ben’s room. There, we reminisced about the best moments of the weekend and shared more laughter and good times. I enjoyed every moment of the weekend. Kite flyers are a special breed!

A special thanks must go out to Jay Knerr of The Kite Loft for hosting this festival. I think it was a great success. There were many kite flyers out there, doing what they love and many, many spectators just enjoying the marvelous show that we put on!

See you on the beach!