I’ve been to many festivals over the last few years, traveling with iQuad. All over the world, by plane, train and automobile. So, when the opportunity arises to go to a festival in my own backyard, call me excited. Actually, to be fair, it’s probably the festival I have gone to the most over the years and this year was the 34th edition of the Pacific Rim Kite Festival. 34 years? Wow, that’s pretty impressive, the running average for “long running” in kite festivals tends to be around 20 years (Zilker being the huge exception to this!)

Many moons ago, the festival used to host a competition but, in all the years I have been going (since 1996!) there’s been nothing beyond the obligatory Rok battle and it’s simply a festival of demos and a lot of kites. Which suits me just fine to be honest. Held just outside downtown Vancouver at Vanier Park, the park itself is well known to kite flyers mainly for one excellent reason. It’s Ray Bethell’s home park. Surrounded by water and with a backdrop of Vancouver’s downtown core and the Coastal mountains to the north, both Ray and I feel that it’s one of the most picturesque places to fly a kite in the entire world. Maybe not one of the largest, and it’s a problematic place to fly in anything but a west wind, but, when it’s right, it’s spectacular. And as it is for Ray, it’s also my home field. Nothing will ever quite beat a festival I can drive to in under 20 minutes if I speed a little bit. And free parking!

“Pacrim 2009” began for iQuad with Steve DeRooy and his girlfriend Willow rolling into our place on Thursday evening, with John and Bazzer expected to arrive the Friday around noon. A glance at the weather forecast suggested we might be in for a repeat of last year’s fantastic weather across both days. You see, when you live in what’s called a rainforest, no matter how nice the weather has been leading up to any given weekend in the summer, the odds are often 50/50 on that weather continuing. I’ve seen the repeatedly over the years I’ve been going to this festival. The “usual” situation is that there is one really nice day and one questionable day, usually with rain. iQuad’s first visit had torrential monsoons with high winds for the Saturday after a beautiful Friday and I must say, Sunday was only marginally better that year.

But from the vantage point of Saturday morning, it looked like we’d indeed get another weekend of back-to-back sunny days! HOOOOORAY! We jostled the sleeping iQuadettes from the motorhome out back of our house, and off we went down to the park for a day of flying. And, what a great day it was, from start to finish. Perfect weather and perfect winds for everyone. Usually, the Pacrim festival is made up of local flyers, with iQuad being a recent addition but, this year, the BCKA stepped a bit beyond the local flyers and invited Penny Lingenfelter up as well. I suspect that when we look back at this year’s festival in the Festival Committee meeting, we’ll decide this was a fantastic addition to the festival. Penny set up a great garden of kite related flying things that kept kids and adults alike occupied. That, paired with her always entertaining routines were a hit this year.

The first few years I went to Pacrim, I often felt a little lonely as a Rev flyer. Many demos of dual line flying, followed by the occasional quad line demo. But, the last couple of years, the amount of Revs at Vanier has been climbing and this year, not only did iQuad return for more mayhem, we also had the debut of Vancouver Island’s own Island Quad, a new quad team formed at Clover Point, ground zero for kite flyers on the island. Comprised of Terry Wiggil, Willow Robin, Pete Wolf and Mario Di Lucca, they had made the journey over to road test some of their routines before they headed off to Swift Current, Saskatchewan for their very first “official” invite festival. They flew great and with the added “firepower” of a second team, this meant the Rev megafly (which we see more and more and more at festivals these days, much to my delight!) got as high as 16 people on the Saturday, easily the most we’ve ever had fly at once in that park. Maybe even a Canadian record? 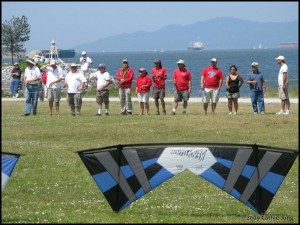 But, despite the overwhelming amount of quads on the field, there were many other things happening around the park as well. The local chapter of Air Cadets always heads down and helps the BCKA teach kids how to make simple sled kites. They were kept busy all day long, both days and the skies were always full of the kid’s creations. Surprisingly, they managed to mostly steer clear of the demo field which is a decided plus as the lines on these kinds of kites can often go through a sport kite’s spectra lines like butter but, I don’t remember there being an issue with this. Maybe I missed it! Tristan Underwood and Lam Hoac provided some dual line action on the main field as well, I overheard one couple’s utter amazement in Tristan’s skill, wondering aloud how a kid so young got to be so good. I only offer one explanation. Practice Practice Practice! He seems to spend his every waking moment practicing! And for Ray Bethell, he’s honed his skills for more than 20 years in this particular park and he once again dazzled all that saw him this year. I like to sit in his dedicated bench when he flies to get a better view but, this year, it was always full of people marveling at Ray’s abilities. Good Stuff as we say at Vanier…

Years ago, my first “demo” in front of people took place at the Pacrim festival. I was nervous beyond all belief, probably to the point of shaking a little bit. But, I survived this moment of sheer and stark terror and have since demoed around the world with very few issues. Thus, I still get a little misty eyed when demoing in that field. It’s my home, my favorite flying field, and where it all started for me. Most years, this has gone very smoothly but Sunday’s winds proved to be a bit of a challenge for everyone there. As I mentioned at the start of this, winds from the west rule. Smoothed out by all the water, they are blissful to fly in. Winds out of the east however are forced over a nearby, tall bridge and through the downtown core, making them rough and unpredictable, even if it is a little windy like it was. Someone has this on video but I’m now on the hook for providing one of iQuad’s biggest crashouts since we started three years ago. As we were headed up after a fountain, I reached the top of the window, flipped 180 degrees around to start the descent but, not only found no wind at the top in order to make the turn, but, it gusted a wee bit from the west as well, flipping my green machine over and straight to the ground, neatly trapping the other three under my flailing lines. I think the proper term here is “voila!”  Every dog has their day, and this time, a monkey had his. The best approach to such disasters? Laugh them off and move on!

After all, kite festivals are meant to be fun, aren’t they? This year’s Pacific Rim Kite Festival was no exception to this rule with great weather and great flying.