Sometimes, we manage to miss out on fun events that are quite literally in our own backyard. I know for myself this is certainly  the case with the Parksville Kite Festival. It’s been running for a good number of years now, organized by John and Marzlee Freeman, just a short hop across the water on Vancouver Island. And yet, I’d  never been. Sometimes it was due to commitments at other festivals, sometimes it was just sheer laziness on my own part. And, I very nearly didn’t go again this year!  But, we woke up Saturday morning bright and early and thought, you know? A day trip would be kind of  fun to do! So, we packed up the Volvo with as many kites as we could and headed on over to the island for festival time!

Getting to Parksville isn’t particularly painful. It’s a beautiful 1.5 hour trip across the Georgia Strait to Nanaimo from Vancouver, and then about a 20 minute drive from there. Turn right at the big sign referring to the Community Centre and you have arrived at a really pretty spot to fly some kites. With water and a beach on side, there’s a fair sized grass field where the festival itself actually takes place. 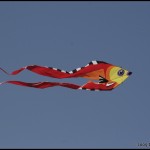 The smarter people had begun arriving on Friday, and as we missed the ferry we’d intended to take, we made it around 1pm on Saturday afternoon. This general area of BC has been going through a rather spectacular summer (and late spring!) this year and this weekend was no different. It’s been the sunniest summer I can remember in a few years and this weekend was no different. Sun sun sun and about 80 degrees, which is decidedly pleasant. My only wish at this point is that this trend continues on through to WSIKF in mere weeks. My fingers are crossed!

Upon arrival on the field, everywhere we looked, there was a different kind of kite. A really great representation of single line kites made by a large amount of people. I’m convinced nearly the entire BCKA was there and we had a nice variety of out of town guests as well, all lined up across the back parking lot, with a huge amount of kites in the air. A special treat was finding Carl Bragiel and his wife, Lisa being invited guests. I haven’t seen Carl in a while so it was really nice to just sit back and catch up. Plus, I got to watch him fly a few times as well. I’m hoping he gets invited again next year, I know the crowds really liked his flying.

Kids were kept quite busy both days as well. When the winds permitted (more on the winds soon!) there were candy drops put on by the BCKA and also the ever popular teddy bear drops too! “Bear in the air” rang out across the park quite a bit. Plus, kids got to build their own sled kites as well. I don’t think I saw a single bored kit there at all, but, I saw a few that weren’t too happy to be leaving! 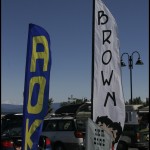 Of course, my main motivation in heading over was to get some quad flying in. Vancouver Island ( and to a certain extent, BC in general) has been going through an explosion in Rev flyers. Recently, Island Quad landed their first festival invites and mega flys down at Clover Point in Victoria often get beyond 12 flyers. Regularly. While this can be attributed to a large number of people, the poster child for Rev flying in Victoria surely must be Steve DeRooy. But, with Steve off in Brookings with iQuad (for me, it’s a brutal drive, 14 hours plus, so, I send JD Fabulous in my place…)  I felt like it was a nice touch for at least one iQuadette to put in an appearance! I certainly wasn’t disappointed at all, when I arrived there was more than 10 revs already laid out in the field, with people moving in and out of the lineup as the days progressed! NICE WORK PEOPLE! I remember one of the very first Parksville festivals, when I wanted to go just so that there’d be a single quad represented and these days, every where you turn, theres another group of people flying Rev team. These are the things that make monkeys smile. I got to call for a while, which is something I’m still coming to terms with, so I like to practice ordering people around at every opportunity! I also really like flying in any other position than my usual last in the line iQuad placement, just for the variety! I had a lot of chances to do both at this festival!

Well, to be fair, not as much chance on Saturday as I would have liked. One of the things I tend to take for granted is that if I’m on the water, the wind will likely be smooth and, off the water. And honestly, I’ve flown in some truly terrible winds, all over the place, both inland and sometimes even on the water. But, I spent much of Saturday afternoon trying to remember a more chaotic time with the winds and by the end of the day, I nominated the day as one of the weirdest. You simply could not win. One minute, it’d be blowing a good 15mph off the water, and often in the space of another 60 seconds, it’d turn around. Or die off. Or do both. Or neither. I set up three separate kites before I settled on simply using a heavy standard and sucking it up in higher winds, but, even then , it was often maddening trying to cope with the chaos. That being said, there is certainly far worse ways to spend a day down near a beach, so this isn’t a complaint by me and given it’s entirely out of the festival’s hands to do anything about. I know all too well how this goes somedays.

Given the weird winds of Saturday, we elected to stay for some of Sunday as well, thusly extending our road trip a little bit more. I certainly hadn’t gotten my fill of flying in! Nicely, Sunday’s weather was more of the same however the wind was far more cooperative and flyable.. The single lines were able to simply park themselves above and anyone else flying had a much smoother time of it as well/. Given I’ve now seen firsthand what a fun festival this can be, I’m sure it will be on my list to return to next year!