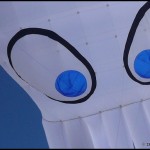 I was a bit startled when Nathan Sendan called. He wanted an Octopus. A really BIG Octopus. 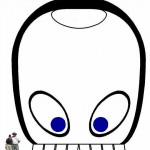 Now as most of you know, a standard Octo is 90 feet and the Over-Large Octopus at 130 feet has four times the volume. Scale that up again and you get something astounding — about 250 feet long and 16 times the bulk of what we normally call a “giant”. The head alone is over 2000 square feet.

The kite was custom made for Nathan by GKPI and produced by Peter Lynn Ltd. Designer Simon Chisnall organized a special team of sewers to complete the project in time for the Berkeley Kite Festival. He constructed the kite in three 70 pound sections that zipped together but could be disassembled for easy transport. And then, because there was no time to test and tune in New Zealand, Simon brought the bags himself to San Francisco.

On Friday Morning, a special team was assembled to manage the first launch of SOLO.

No one had ever flown a kite like this before. But we had the best possible group of experts and experience. Nathan owned the kite and Simon designed it. Susan and I have the substantially larger MegaFlag and some experience with safety, launching, and retrieving oversize kites. Tom McAlister was the festival organizer. And the Wranglers, including Mike North, Dave Hoggan, and John Kahn — together with “Hill King” Brian Champie and Dan Burnham — know flying big kites at the Berkeley Marina better than anyone.

Nathan had the position of honor (and responsibility) at the anchor point. Simon acted as technical advisor. Mike was crew chief and Dave the conditions advisor. And I got to be launch director – -which sounds good until you remember that Seve Edeiken had the same job.

First we set the anchors and the 20-ton flying lines. Then we completely cleared the fields and space down-wind all the way to the water. We stretched out the pieces and assembled the kite; connected the flying line and take-down line; double checked the release; and reviewed our plans and signals. Then we launched and connected a large Pilot.

The launch was managed with two teams of three people. One held the kite for inflation, one stood by to help or untangle, and one stood back as a spotter. With winds blowing about eight, the big white monster began to fill and then gently lifted off. Success!!!

The Berkeley Kite Festival has been going on for more than 20 years and is one of the best attended in the country. Thousands pack the park to see the large kite shows on Wrangler Hill, the sport kite demos, the rok fights and candy drops. But this year, SOLO was a main attraction.

The flight team scheduled two shows each day with plans to fly SOLO before the winds exceeded 12 mph. 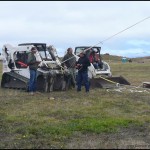 Maintaining field security was a constant challenge as people in the park with that unique Berkeley attitude questioned why they couldn’t use downwind sidewalks . But safety is always paramount when flying large kites and most spectators were happy to cooperate.

Anchoring the kite required two solid Bobcats. They were quickly maneuvered onto the field before a launch and proved more than adequate to hold SOLO in place.

When time came to land the huge kite, we used a quick release similar to the one anchoring the Mega Flags. The main line is set free and a second line attached to the base of the kites lifting surface takes hold. The kite flips over and spill air, settling gently to the ground. 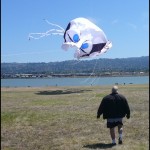 We were initially concerned that the Pilot would cause problems when the kite was released, but it stayed airborne and helped control the landing by keeping the head oriented downwind.

Overall, SOLO worked extremely well and proved to be an oversized crowd pleaser. 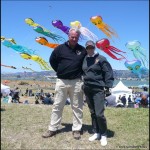 Berkeley remains one of the great American kite festivals.

At a time when many events are struggling, the formula of large kites as a magnet, and performance kiting or special events in the main arena is working well here. The Hammamatsu group from Japan have become regulars the past few years, and and a series of rokkaku fights, with 30 kites loaned to volunteers from the crowd are a big hit.

Buyers were lined up six-deep at the Highline Store all day and the learn to fly fields were constantly filled. The biggest problem seemed to be where to park all the spectators.

We’ve been coming for 20 years and are pleased to be a part of the show.