When i started flying in 1990 at the age of 15, I commonly pored over the pages of American Kite Magazine and Stunt Kite Quarterly following the exploits of my favorites pilots of the era such as Scott Aughenbaugh, Lee Sedgwick, Ron Reich and Miguel Rodriguez, all the while daydreaming about following in their footsteps at the championships I myself hoped to see in the ensuing years… Kiting has been my #1 pastime since then, a place where I’ve found endless enjoyment both from the community at large and from flying itself.

I do love it, and it really does feel most times like I’m soaring to different places through the keyboard with various projects I’m perpetually involved in… While I’ve never begrudged the “office” tasks, it has been a bit lonely pecking away alone here in the Kitelife offices for the past couple of years… I do however much prefer having someone in-house to provide another viewpoint, with whom I can toss around ideas, and generally team up on certain jobs.

Fast forward, what the hell… Y’all have heard the in-between before, so I’ll just just include a link to a discussion topic on the Rev forum which fairly well outlines our engagement, complete with an assortment of related photos.

It would have been around April of last year that Takako (TK) and I started in on the countless forms and small steps involved in getting a K-1 (fiance) visa these days… It wasn’t too bad all in all, as we’d made the wise decision to enlist the assistance of a legal office which specializes in lining up the correct/current forms one by one, also ensuring that we filled them all out corrrectly and sent fees to the right places… We’d heard horror stories galore, many of which could be traced back to missed information or the simple difference between leaving a field blank and entering “N/A” or “None” instead.

The visa was approved on September 14th of this year and just one month later on October 13th, we were reunited permanently, no more especially painful goodbyes at the airport and months of Skype calls… Even now, it’s still a little surreal, but oh, so nice.

With the bare minimum of planning, we exchanged vows on November 14th in beautiful Yachats (OR), an intimate ceremony attended by our iQuad teammates and ministered by my good friend of many years, Gayle Woodul… Four days at a truly beautiful hous on incredible coastline, a miraculous day of sunshine on wedding day, lots of fresh seafood, a solid afternoon of team flying and some of the best company newlyweds could ask for, our deepest thanks to Steve, JD, Bazzer, Monkey and Gayle for helping to make it such a special occasion for us.

We just attended the Cape Fear Kite Festival beginning of November, we’ve got an iQuad training weekend at an undisclosed location in December and we’re anxiously gearing up for the 2010 season beginning with the Windless Festival (Long Beach WA) and SPI Kite Festival (South Padre Island TX)… I know we’re both looking forward to meeting so many of you fine folks as a married couple, and to bringing some six-person iQuad action back onto the scene with a brand new routine. 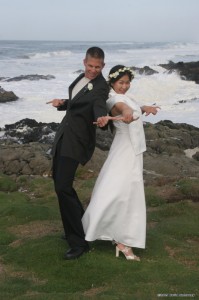 There’s a great deal to be done over the coming year, lots of opportunities to promote kiting and help breathe additional life and excitement into the community… All accomplished with positive thought, good tact and the bravery to view kiting in it’s full light as it relates to the era in which we now find ourselves as well as the generation(s) who are just now coming into maturity with a vastly different field of interests and perspectives behind them.

We’ve got a number of significant projects on our to do list, starting with bringing our old issues back online one by one… As some of you may recall, much of Kitelife.com was infected by a virus back in April of 2007, forcing me to finish and implement a new, more secure site format (which you see now) which also required me to go through and clean/convert our past issues before adding them to the new archives.

On the up side, the whole site (new format) is far more efficient from an administration standpoint and we did some work to make navigation a bit more fluid and less “all over the place” – on the down side, it meant that there were sixty past issues in need to cleaning and conversion before they could go online… All of this, while I was still in Japan on iQuad’s 2008 tour there, so much of the rebuilding was done on my laptop from Takako’s studio in Tokyo.

This marks the 9th new issue (61-69) since we overhauled the site, plus issues 1-3 and 27-59 have been restored to the archives as well, all amidst two very busy traveling years which saw me out of the office more than I was in it.

Now, even as I’m writing this article, TK is learning the ropes of web design as she works backward through the archives and converting the last issues for restoration one by one… It proves to be more and more difficult, as issues 1-27 were produced by Kitelife’s founder Mike Gillard (bless his heart) using an archaic program called Frontpage that relied on far too many extra files and annoying, tediously hard to eliminate bits of code interspersed through everything.

That being said, it’s still a work of passion and on the to do list over the coming months – along with this, I’d very much like to enhance the web site with a public archive of videos for general consumption, more videos in the subscribers section and a series of video tutorials for Revolution flying… Basically, revamping our efforts to produce an ever growing variety of online media for kitefliers all over the world, and to further promote modern kiting to a new audience in new ways.

As always, I’m grateful to our advertisers for their support and especially to those of you are official Kitelife Subscribers, taking an active role in helping us continue our work… Truly, none of this would be possible without you.

Regards and thanks for all,