Christmas came a wee bit early for 100s of Revolution flyers this year. On November 24th (2 days earlier than I expected honestly!), Revolution Kites officially released the Revolution Zen, a new kite developed by Barry Poulter and John Barresi over the last year. Designed from the start to be the ultimate low wind Rev, it takes it’s cues from a few different sources, ending up with a kite that’s entirely unique. 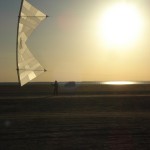 The Zen takes it’s design cues from two kites primarily. It takes the sheer size of the original Rev 1 with it’s 9 foot wing span across the leading edge and mates this with the improved sail design of the B Series 1.5s that have mostly taken over the kite world. On one hand, you’d think it’d be as simple as taking a CAD drawing of a 1.5 and simply scaling it up but,  no, it was much more involved than that. Much more.  I was lucky in that I had a front row seat to many of the prototypes, having flow a handful of them over the last year.

The first one I ran into was an all white one Bazzer had brought with us to South Padre Island last January. It was a fun kite to fly though given SPI’s penchant for higher winds, we didn’t get it out too much. Remember,  it’s ideally suited  for low winds, ie, 1 – 4 mph, but, it can safely go up to 8 with its standard rod setup. But that first Zen was merely the start of the testing process. According to Bazzer he made 21 separate prototypes and I’d bet there was hundreds of hours of flying and accompanying bridle tweaks.

iQuad got a set of them in Mid-July so we could try them out in varying conditions and believe me, we loved them dearly in lighter winds. They saw a lot of use in Brookings and Colombia and the next stop was WSIKF where a large handful of people got their hands on the kite for the very first time.

WSIKF in particular ended up being a great showcase for what was to come.  One of the days in the middle of the week, I clearly remember there being next to no wind at all, and I snapped a picture of  more than 20 1.5s sitting grounded, with the only thing up in the air being the 4 iQuad Zens. Hopefully everyone who came got a chance to try them out but, even then, there were a few more tweaks and changes that have happened since the magical point where Bazzer and John pronounced it as “done!”

To be honest, I think it’s been the deep testing that’s truly set this Rev apart from the crowd. We’d take out a new one and try it side by side with an earlier one for comparison. Different rod combinations were tried. Different handles were tried. Nearly any variation that could be done was tried at one point or another. I remember in MOTS this past September, Bazzer showed up with yet another variation to try and it lasted an entire 15 minutes before he had decided “nope, not a good change.” So, it’s been tested to death! Enough on this, how does it fly? Quite excellently I must say! It’s certainly a different beast than the 1.5 and definitely a different beast than the 1 and much as you’d expect on many levels, it falls precisely between the two.

It’s a slower kite than the 1.5 but, not THAT much slower really. And it’s a very precise kite as well. John worked the Rev 1 to his advantage as a competition kite for many years while many of us flailed with SLE equipped 1.5s and the precision capable off of the Zen is noticeably better than a Rev 1. I made a point of A/B testing this at one point in September when I had a particularly well suited afternoon of flying. For me, initially the Zen was an odd kite to fly. When we initially started flying as iQuad, we used 1s here and there but, one of the things that put us back to the 1.5s was the tendency for 1s to surge in higher winds. They’d catch a breeze and BAM off they would go and I found this to be the case with the Zen as well (later versions have mellowed this out quite a bit). I was so disoriented by it at first, I smuggled my team Zen back home in September specifically so I could get a better grip on it. Literally.  And, as I flew it that afternoon, I quickly fell in love with it’s precision.

But, what about the quality of the build itself? Well, give Bazzer is making these in mostly the same fashion as he has been with the B pros, you can expect the same quality here. Handmade in Bazzer’s Bat Cave located in Washington state, the same appointments have been made on the Zen, from the reinforced trailing edge to the meticulously sewn leading edges that have no interest whatsoever in EVER fraying. VERY nice indeed!  The initial “stock colors” are shown at left but, as with the B Pros, you are entirely allowed to order a custom color set, it will simply take a little longer and cost a little more money. Well worth it if you have your own personal idea on how you’d like your Zen to look. Me, I’ll likely order one to match my set of Green Fade Pros sometime after Christmas when the initial deluge of orders calms down.

If you’d like to get some further information from people who have flown this marvelous kite, take a peek in the Revolution forum at these threads :

Lots of great information is lurking in this thread from the many people who have managed to get their hands on one of the prototypes over the last year, including some great info from Bazzer himself on some of the design decisions. And it that’s not enough to whet your appetite, below is a video John has put together of the final prototype being flown in Portland when John gave it it’s final seal of approval:

Ready to get one? Contact your local Revolution dealer (many are listed on the Kitelife links page) and get your order in now, as demand is likely to be quite high for the new Zen!