Some days it is just too windy. Some days the field is too crowded. And some days, you just decide you need a show without the need to fly it, too. In other words, better to stay on the ground than miss Minneapolis Airport entirely….

Seriously, if you are building a big show, you probably need some serious ground pieces — banners, bols, inflatables, bouncers or ground spinners. Some people even specialize in “kite” shows that don’t fly.

Allan Robb of Fairfax, Virginia has put together an amazing display that garners tons of attention, plenty of photographers, and invites to a lot of local events. “Not bad”, he says, “for a grey haired kite flier”. 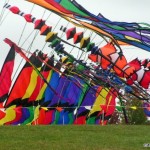 Allan adds that his ground crew is made up of thirtyish single women. All gorgeous and high spirited.

One has been a next door neighbor since she was eight, one he hired as a college freshman intern, others are friends of friends. One is now a lawyer, and another a nurse in a big hospital.

Allan adds, “I can usually count on boyfriends coming to help pack up at the end of the day too….”

Mike Agner of Wilmington, North Carolina also has a big ground show — but with larger inflatable pieces.His Giant Spikey Balls have pleased the crowds in France, Thailand, Malaysia, Canada, and around the USA. 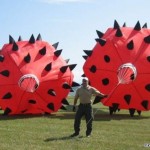 Spikey Bouncers work well when the winds are strong and gusty, or space is limited.

We are working to spread a few more around in different colors so that fliers can come together and combine pieces to create a larger show. Think Spikey Balls in goups — liek Octopus.So far, the record is five.

Larger bouncers like this are definite children magnets. You need to constantly watch them for safety, and so the kids don’t maul your gear.

Big Bouncers also generate a lot of pull and need to be well anchored. I once saw two connected by a tether, pop an anchor strap and go rolling down field together. They wrapped around a beach hut, pinning some hapless bystander to the wall with the connecting rope…

Fliers along the Washington Coast have taken to massing our 28 foot Crowns. Each year, they gather at Long Beach to see just how big a show they can pull together. Participants include Scott Slater, Andy Tauber, Mike Classen, Ed Jensen, Rae Bohn, Ray Hertz, and several others. The most they have flown so far is 18 pieces. (If I missed you, email me quick and I’ll add you name!)

Now, keeping 18 Crowns inflated at the same time is like spinning a dozen plates on sticks. The ones upwind create turbulence or block clean air. You have to run back and fourth attending to which ever pieces suddenly decides to collapse. Organizers called it a “world record”—and while the feat may not make the cover of Guinness, it was still a wondrous sight to behold. 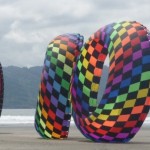 Incidentally, the large rotating ground bouncers are called “Bols” (named after the large cups the French use for coffee). “Crowns” are the particular bols we make in the diamond pattern. Diamonds — crowns — get it??

We even have a pair of double size – 56 foot Monster Crowns that we pull out occasionally – in very light winds. 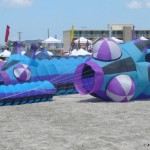 Paul and Tina Keeler out in Bethlehem, Pennsylvania have created a “Caterpillar Family”. Their three piece set includes a large, medium and small one in coordinated colors. They are flying 50, 30 and 15 footers.

The Caterpillar was designed by Peter Lynn with minimal places for kids to grab hold. 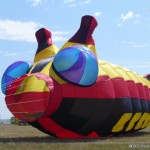 Originally, they came with “feelers” on the front and back — just like the kind you find in New Zealand. But too often, people thought they were being displayed upside down (feet in the air) so we took the back feelers off. We now make the bouncers with a lifter loop to use with a Pilot, or with an anchor loop underneath to use with a sandbag.

Kevin Sanders in Australia is experimenting with vents to trap the wind inside. This minimizes premature deflation. But it also makes it hard for children to go inside (with supervision and permission!) Actually, Kevin says the vents let kids in but not easily out. Not a bad idea!!

Our final ground display example also involves children — and how to wear them out! Here’s a photo of a great Bol Race in Lincoln City, Oregon.

I still remember the windy day in Berkeley when I first suggested to Susie that we invite people to run uphill pulling our ten foot baskets behind them. At first, she thought the idea was crazy. But it quickly caught on. And since baskets are just another version of the generic “bol” design, we called the activity the “Running of the Bols” — a play on words from the even more crazy “Running of the Bulls” in Pamplona Spain. 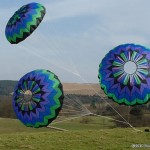 We’re still using our original eight-piece set of red and white Baskets which now have many hundreds of running miles on them.

Any kind of bol will work — as long as contestants all use the same size and style. But we think the ten foot Basket works best. For smaller runners or stronger winds, we just combine people into teams!

Of course, you don’t have to run to put on a show with Bols, Baskets, and Crowns. Just stake them out and let them bounce!

So there you have it. Bouncers, Bols, Banners and Baskets. Caterpillar too, although the name lacks a fun “B” alliteration.

We think ground shows are fun. If you want to try adding something from these four ground groups to your flying program, we’ll give you a 20% discount on Spikey Bouncers, Crowns, Caterpillar, Baskets, or Banners between now and November 15. Just remember to mention the Update Discount.

Thursday, Susie and I fly off to sunny Wilmington NC for the Cape Fear Kite festival. We expect to meet up with a HUGE swarm of octopus there. Watch for photos and news in a few days.