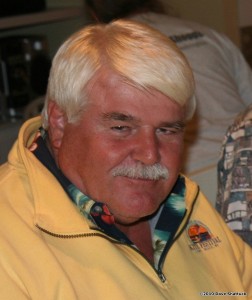 Kerry Glass was a kite flying friend of mine.  And please put some extra emphasis on that word “friend,” too.  That word is quite important to us.

Oh, our friendship originally centered on kite flying, but it quickly grew into something much more meaningful to me.  Yes, he was certainly always a kite flier, but limiting Kerry to only a “kite flier” meant you lost the other 90-95% of the man – and that would be a sad loss indeed.  Kite flying was a hobby to Kerry, nothing more.  Oh, he took it seriously, because it was his Joy, his delight – his “Bliss!”   But it wasn’t his be-all and end-all, because being Kerry meant “just living a full, happy LIFE” in all aspects as far as Kerry was concerned!

Fredrick Kerry Glass was in his mid-50s when he passed away the day after Thanksgiving in 2009.  Kerry and Debora, his wife of more than three decades, had been up in Puget Sound with some long-time friends for their Turkey-day celebrations, and they were returning to their favorite place to rest and relax and enjoy life – their gorgeous condominium overlooking the beach in Long Beach , Washington . Kerry was unpacking the car when he collapsed and couldn’t be revived by the EMTs arriving at the condominium.

I first met Kerry at a sport kite workshop sponsored by the World Kite museum held on the beach in front of Kerry’s Condo back in 2003.  He was a big, robust guy, around six feet tall and roughly 225 pounds more or less.  And like many big men, he had an All-Man attitude about him, accompanied by that soft, gentle heart-of-gold demeanor that allows and encourages you to love the guy right off.  Just think of the stereotypical “Santa Claus” without the beard and glasses, and you almost have it right – except that Kerry had a real liking for things Yellow, rather than Santa’s Red and White.  He wore yellow sweatshirts, he liked an old yellow hat that I own, and he LOVED his yellow kites!  And his wife Debora favors Pink, of course.

Well, we started flying our Single Line kites together… and over time, we learned a bit more about each other too.  And the more I heard from Kerry, the more I liked and respected the big guy.  Oh, we discussed state and national and world politics, and we certainly had our differences – and then we agreed on many political concepts in spite of those differences.  We also discovered that we shared a taste in red wines, we liked good red steaks, and he was a Ballentine’s Scotch guy and I like my tequila – and so we ate and drank and talked our way through a few excellent meals together. And afterwards I’d go outside for a cigarette, and there Kerry’d be with one of his slim cigars, right there beside me.  And we’d start to solve the problems of the world all over again.  Or we’d discuss the way our kites flew, and listen to each other about some changes to help them fly better next time.  Or we’d talk about the people we knew together (mostly kiters), and try to find some ways to help others in the sport grow, and get to be better fliers.

And through it all, regardless of which one of us hosted the fine meal, we’d both look out to the West at the night stars up above, and at the ever-present Pacific Ocean right there in front of us.  At that glorious water – because Kerry and I had both been US Navy sailors in earlier parts of our lives, and we shared a deep and abiding love for the sea – those lovely, ever-changing, deep-water oceans.  And somewhere in those quiet discussions that men over 40 sometimes share between them, our friendship deepened, firmed up, and we bonded together and became brothers.  And I can still mark the occasions when that occurred, too.

Oh, we shared many delights.  We watched fireworks together on the 4th of July, spent flying sessions together when the winds were perfect (and on a few ugly days too), enjoyed new and old kites to fly and to share with each other, shared the gentle company of our lady-friends Theresa and Debora, and we enjoyed a host of other delights, both large and small. And I am certain that Kerry also understood that the friendship that we shared between us was good and solid and quite comfortable, and it would be there well into the future too. That friendship-knowledge was also our shared delight, our joy.

Well, for whatever reason, that can’t happen now, I guess.  So I’ll miss you pal.  I had other things I wanted to tell you, a few items I wanted to discuss of course, plus some thoughts to share too, and I wanted your opinion on a couple of other things.  But wherever you are, I hope there’s plenty of sunshine, about 10 MPH of steady breeze, a big yellow sweatshirt for you to wear, and a yellow dual-line kite that axels perfectly every single time – all right next to a great big ocean. And I hope there’re a couple of those canvas beach chairs with drinks pockets in the arms nearby – one for your Ballentine’s, and another for my tequila.  We still have all that “stuff” to share and discuss.  Because there’s no way that this friendship is over yet.  Hell, we were just getting started, Kerry…

So I’ll say something to you that I learned to say down in Argentina .  Down there they’ll tell you NOT to say “Adios” – which means “Good Bye.”  They’ll tell you that’s way too “final.”  Instead, they tell you to say “Hasta Luego,” which is Spanish for “So long until we meet again.”