When is a bridle not a bridle??When it is a single line attached to a single point on a kite.

Eiji Ohashi of Japan, known around the world for his kite trains, originally called this design system the “one-bridle kite.” But he reports that kitemaker Reza Ragheb challenged the terminology.

The no-bridle style makes it easy to add kites in his “Washing Line System” of trains. He has adapted kites of many traditional shapes and forms to fly from a single line; at the 1996 Berlin Kite Festival, he put them all up in a single train: a tametomo, suruga, sode rokkaku, and the Edo pictured here.

The key design feature is applied in the building process. Traditional spars are replaced by a pair of spars (carbon fiber) at top and bottom, curved in toward the center to provide shape and lift. The sode kite requires three such bowed spars.

All cross spars, whether curved or straight, are also bowed across the back. The result: an aerodynamic kite not dependent upon a lower bridle leg to provide opposition to the wind.

Ohashi says, “The pulling power of my new kite is less than the one with the Magic Balancer” (Kite Lines, Summer-Fall 1993). He provides these comparative measurements of pulling power: Traditional Edo = 1

Such dramatic reductions in force obviously make it easier to fly long trains of big kites.

Ohashi adapts traditional symbolism to create his Yin Yang birds, which are cut from cloth and appliqued to the kite cover, sometimes with stylistic waves beneath.

“You know, Yin Yang is a thought in ancient China. It says, ‘Everything in the universe is made up of Yin (negative) and Yang (positive).’ Water-fire, cold-warm, shadow-light, female-male, etc.,” Ohashi explains.

At first glance, some kitefliers might imagine the single bridle point to be ineffective in high winds. But Ohashi says the rear of the kite merely blows almost to the horizontal and the kite remains stable.
In the lightest of winds, he moves the towing point aft along the spine, about one-third its length.

Another variation for high winds makes the kite a bridled kite, but still in an unconventional way: Three bridle legs are all attached to the top spar, at the ends and center.

Left, Ohashi prepares to launch a pair of his large Yin Yang bird kites, each with a single line attached at top of spine. Curved spars at top and bottom create the shape usually provided through bridle tension.

Right, Ohashi rokkaku (left) and sode kites fly gently from single lines. In light winds, he moves the towing point about one-third of the way aft.

Ohashi says the No-Bridle Kite is the best kite for the flier who says: 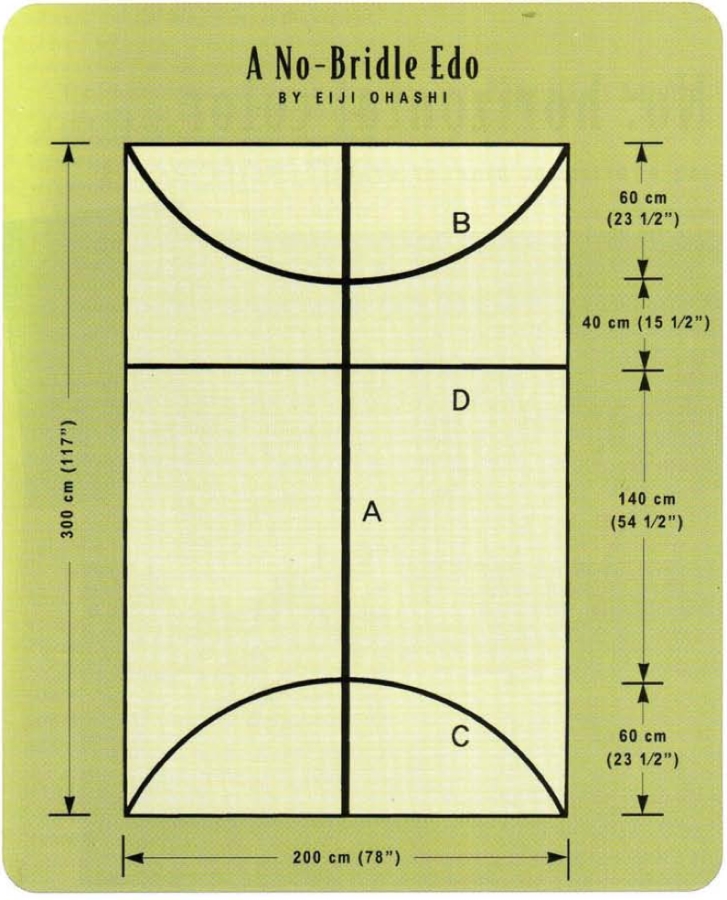 A hem of 18 mm (0.7 inches) is folded and double-stitched at the kite edges.
Spar pockets are of nylon webbing, 3 cm (1.2 inches) wide. A triangular reinforcing patch of ripstop is sewn at the corner, and the webbing folded over and stitched together to form the pocket.

The kite line is attached to a spring metal clip, tied on with string led through a hole punched in the end of the spar pocket.

For flying in train, a double loop of line is tied onto the flyline at intervals, to permit easy attachment by the metal clip.

Lines for bowing the spars across the back are tied through holes in the end of
each spar pocket.

This article was reprinted with permission from Volume 12, Issue 3
(Spring-Summer 1997) of Kite Lines magazine, available in our archives.