Roughly 8 years ago, a bunch of people from the Gone With The Wind (GWTW) forum had an idea. “Let’s all meet at Dave Shenkman’s kite store (The Kite Connection) and have a kite party on the beach.. Just a small gathering, with no schedule and no use of the “F” word, that one being “festival”. Over the years, it’s grown by by bit, and changed a little here and there, however, the “F” word is still banned and this remains one of the funner events I’ve had the privilege to go to 3 times now! I mean, really, there’s not much going on in kiteland in early  March and how can you beat Huntington Beach weather when the rest of the country is frequently mired in what’s called “Winter” (or, as we say in Canada, “good times for outdoor hockey”).

Kite Party is many things to many people these days. It’s an opportunity to get out and get some sun for those of us in more wintery climates (though, to be fair, Vancouver had a fantastically warm winter, noticeable especially any time you watched the Winter Olympics). It’s also a chance for manufacturers to get their new kites introduced at the KTAI convention out into the hands of actual flyers for some testing and general all around abuse. It’s a chance for a bunch of us flyers to hang out, trade stories, fly some OPK and see what we have all been up to since the fall. It’s a chance for kite makers to pop up into the air what they have worked on over the winter.  And, there are a fair amount of people who would choose “all of the above” for their own reason. It’s flexible, it’s a PARTY!

Last year squashed my chances of going for a few reasons, timing and finances so, I was doubly determined to make it this year and everything fell nicely into place. Yippee! For some, Kite Party has become a week long event, people begin showing up on the beach as early as the Monday. And, I can say I wish I was one of those people however for me, the trip began with a dash for the border Thursday afternoon, with an arrival at the illustrious Howard Johnson’s that evening. Nicely, the John Wayne airport is mere minutes from the hotel so I settled in and got ready for a few days of what was shaping up to be excellent weather all weekend long! Bring on the sun!

For most, Friday was just another great day of flying, but, iQuad came with an agenda. We needed to work Joji Davis into the new routine by the end of the day. What this translated to was a quick, early breakfast at the local haunt of choice, The Sugar Shack and then down to the beach to run the routine over and over and over again. Oddly, the first 30 odd seconds or so took the longest time to get down!  And once we’d reached the midway point, the rest of it came together quickly for all of us. Given we’d only come up with it in January, all of us needed a refresher but, by the end of the, Joji had it all under his belt and the routine was looking better than ever!

Elsewhere on the beach, the boys from Wakeless Kites had two progressive dual line stacks up that everyone wanted to have a fly with. Kent Kingston had dragged out a gorgeous 8 stack of Rev 1.5 SLES that also proved to be pretty popular with the flyers. And the IKE members and the Rev Riders kept people amused along the pier with a non stop show of Rev team flying.  And by the time the sun was setting, we were all off for a Mexican feast at a restaurant just up from the beach! 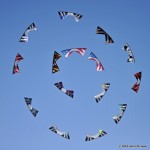 Saturday unfolded much the same, with brilliantly sunny skies and by lunch time, the sand and the sky were quite filled with kites. In keeping with Dave’s “usual” approach, there was no set schedule, at all. And, that’s just how we like it! He did put in some demo sessions for the crowds assembled on the pier and down on the boardwalk, with iQuad, Rev Riders, Too Much Fun, Alex Herzog and others putting on a good show for the crowds. Plus, there was a great showing of single line kites up on one edge of the field as well, providing a non stop show of colour for people wandering by. The crowds were great for this event as the Los Angeles area had just come off on a couple of weekends in a row of rain, so, with the sun out in all it’s glory, the people hit the beach in droves.

One thing that Dave did do differently this year was that he managed to convince the city of Huntington Beach to let him use some space on the south side of the pier, where a “learn to fly” field was sectioned off. This was a huge success! Both dual and quad flyers took turns giving all who wanted lessons some experience on the end of a kite. The result of this is that one other thing Dave has done differently this year. He’s got a new store space! If you have been to the Kite Connection before, it was essentially a trailer box. With a spiffy mural on it. Don’t get me wrong, I liked it! However, the City has redone all the store spaces up on the pier and Dave is now in a flashy new space, exactly where the old one was, but, with easily 2-3 times the space! Congratulations on this are due for Dave, it really came out well and there was constant traffic in there all weekend long. If you end up there at some time, make a point out of checking out the signs he has up all over the place.

Saturday night is traditionally the Pizza/Auction night, held not too far from the beach at Lamp Post Pizza. The kite flyers essentially take over the entire back half of the restaurant, and devour massive amounts of pizza and drinks, taking a moment to go and check out what goodies Dave is about to give up. And, as usual, Dave did not disappoint. Amongst the treasures were two Prism 4Ds, which hadn’t even been released to the stores and an all black vented Revolution B series. Myself, I picked up an ULTRA RARE Ron Despojado “2009-2010 Tour De Cerf-volants au Le World” t shirt! I’ve threatened Ron to wear it every evening to bed, but, so far, I have yet to follow through on it…I’ll post pictures if I do. Afterwards, the party continued on back at the Howard Johnson’s, until such time as they politely suggested we need to tone it down a little bit. All I’ll say here is that the drunken teenagers from wherever they were from were far more disruptive than a mellow, happy bunch of kite flyers, even with Corey Jensen being there. 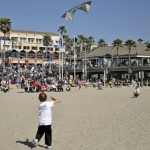 Sunday? Sunday continued on with fantastic weather! In all seriousness, having been to a couple of Kite Partys now, I’d have to say that Dave really managed to dial in the weather this time around. Perfect winds and perfect sun!  And the day panned out pretty much in the same fashion as Saturday had, with “scattered occasional demos” and a lot of lessons and even more flying. But, Sunday is known for a special occasion in the middle of the afternoon. The Ben Lummas kite fly! 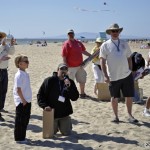 Simple, but quite flyable kites are sold to the crowd until they have bought one hundred of them at 20 bucks a piece. And within half an hour, voila! The sky is filled with little kites. The crowd just loves this and I have to say, it gets a smile out of me every time as well. 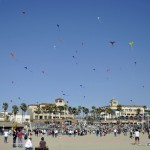 Dave also managed to make Daylight Savings time coincide with the party this time around so while we all moaned and groaned about losing an hour of sleep in the morning, by the end of the day, this translates into an extra hour of sunny flying time! Who could ask for more?

The running joke of the festival was that there will not be a kiteparty next year, and no, I’m not going and it’s not marked off on anyone’s calendars. But, to be serious about it for a moment, the costs of the event have quickly escalated. When it’s simply a party between a dozen or so friends, it’s much easier to blend in, but, once you have a PARTY with dozens of flyers and even more kites, it’s fair to suggest that it takes more time, money and organization to pull of the event successfully. And Dave has some great help with this, all from the flyers who attend the party. I think it’s safe to say that there will be a good group of people there again next year at the best non festival you may have a chance to go to.

I know it’s not marked on MY calendar…