Numismaster.com posted an article recently about the origin of the word ‘kite’. The beginning of the article is below. The article in its entirety is at:

“If I asked 10 people at random the question, “What is a kite?,” I am confident that most would say it is that thing made of paper and sticks that when attached to a string will “fly” on windy days. Everyone has flown kites. I doubt many would say a kite is a bird, which is what I want to tell you about in this article.

The origin of words has always interested me. What is the origin of the word “kite?” Apparently it was derived from the Old English word “cyta,” which is probably from the Aryan root “skut” meaning to shoot or go swiftly. This refers to the birds known today as kites swooping on prey. Also, it refers to the bird’s hovering flight and soaring.

It is thought that the paper kite originally was constructed in China to resemble the kite bird because the paper kite hovers near motionless in air like the kite bird. (The Dictionary of American Bird Names, Revised Edition, E.A. Choate, Revised by R.A. Paynter, Jr., 1985, Harvard Common Press, Boston.)

Kites are birds of prey belonging to the same large family as eagles and hawks. They have long wings and weak legs and spend lots of time soaring. One species, the white-tailed kite (Elanus leucurus), can sometimes be seen within five minutes of my home in Long Beach, Calif., hovering alongside freeways over the vegetation hunting small prey such as insects, small rodents and lizards.

There are 19 species of kites worldwide, and in North America there are five species, one being very rare…. 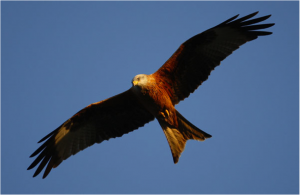 This immediately led me down two separate paths of thought: 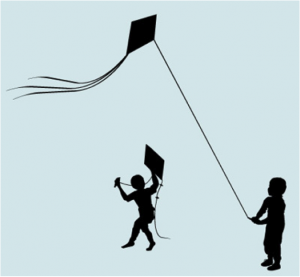 One was, wouldn’t a series of kites (the kind attached to flying line), representative of the 19 different kite birds, be a lovely display.

The other thought was about the actual word kite. I started thinking of the word kite in other languages, and what those words mean. In every instance that I’m familiar with, the word for kite, also means something else…there seems to always be a double meaning for the word. In Japanese the word ‘Tako’ also means octopus, in German the word ‘Drachen’ also means dragon, in Spanish the word ‘Cometas’ also means comets, and so on. Now granted, my linguistic expertise is limited, so please let me know if you know of an example where my theory is incorrect.