The idea behind this weekend started back in 2008 at Sunderland Kite Festival where Stephen Hoath (the legend) ran a Rev Clinic. The weather was horrendous but we all felt we had learnt so much that the seeds of a Rev Team in the North East were sown.

We didn’t really get started until late summer 2009 and after our return from the Ainsdale Rev Gathering Vince (the catalyst) reminded us that Stephen had offered to help out with another rev clinic. He was contacted, a date set, permission was given to use Herrington Country Park (thanks to Sunderland Council) and the invitations could go out (Rev Forum). We knew that at the very least there would be six fliers, our group plus Stephen and Susan. Immediately Felix and Ashley said they would come – Wow two decorators and two from Flying Squad this was Christmas and heaven for rev fliers. From then on the list grew, four from Team4ation, more from the Flying Squad (Hezz, Gary and Gee), Bob (stone in the shoe), Baz, Keith and Richard. From NEKF we had Matthew, John, Jan, Mike, Thomas, Alan and Becky.

As numbers grew a hotel was suggested, Saturday entertainment planned and provisions for two days bought (organised by Cheryl –goddess in the kitchen).

A meeting with the warden of the Country Park finalised everything (big thanks to wardens Ian and Kevin). We were ready! Finally it was THE WEEKEND. Some fliers arrived early on the Friday (Baz and Keith), to fly with Chris and Vince. More made their way north and then further north till they reached the far north on Friday evening. A good evening in the bar was had by all.

Saturday dawned to no snow or rain which has to be a minor miracle in the NE this year (worst winter for 30 years) and wind!

Most arrived on the flying site, Herrington Country Park, under the shadow of Penshaw Monument by 9.30am. The “tea tent” was up and running (thanks to Cheryl supported by Jan and Becky) with broth, Cornish pasties and enough cake to last a week, we wouldn’t go hungry.

Revs were set up, groups formed by ability, team or interest. Overall there was 28 rev fliers, Stephen and Susan smoothly divided there time between flying with their team, others and then coaching everybody else. Suddenly it was 2.30pm, the old adage “time flies when you’re enjoying yourself” fit perfectly. By now we were flying with Susan (a joy to fly with, the banter is brilliant.) Then shadows blocked the sun 12 more revs descended on us for a mega fly (grid practice). We had experienced this twice at Ainsdale but for some like Mathew he was just getting used to team flying!

Your first fear is if you make a mistake do you take the whole grid out? This was my third experience of grid flying and it does get a little easier especially if you are flying next to Susan! Team flying is amazing, obsessive? you just want to do more. Flying the grid is the icing on the cake. First it is great just to be included, but also you get to fly with the worlds best fliers but then you quickly realise where and what you need to improve for the next time.

Grid flying ended the day, time for a short break before the evening festivities. Evening buffet was huge (thanks to Jean at the Campanile). The quiz went well? we only managed two rounds due to the forthcoming auction. First round was name that flier? one person taking part was sorely embarrassed not to recognise two friends he used to fly with quite a bit.

Then to the auction – Vince did a great job as the auctioneer. Due to the 57 items donated we raised a total of £655 for the Dec Haiti Earthquake Appeal. Massive thanks again to the generous people who donated items and/or bought all the items from the auction. After a few more drinks we all departed to sleep ready for another days flying.

Sunday we cleared the ice from the cars and went back to the flying field. Cheryl was already in “the tea tent” providing first or second breakfasts. Unfortunately Sunday became a low to no wind day, Felix and Ashley enjoyed themselves but some of us did struggle a bit.

The bonus was we had time to talk to everybody – Baz with his handles were a popular topic and purchase. Flying Squad set up their new printed team kites and were kind enough to allow everybody a fly of them. Great kites both in appearance and to fly, particularly in the low wind conditions.

By 3.00pm the wind had disappeared completely so that became the cue for packing up and winding our weary way home. For some it was a long journey. The Flying Squad left to the strains of “London Calling”. 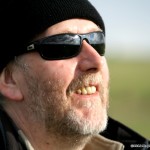 It is always the sad part saying goodbye especially after a great weekend. Enormous thanks for the weekend must go to Stephen and Susan (great tuition, company and humour) Felix and Ashley (legends), Vince and Cheryl (organisation and the “tea tent”) and finally all the fliers who came. After this experience we will do it again!

(Thanks to Stephen Hoath for permission to use the photos and Vince, Chris and Pete N for their time, patience and good humour.)