I thought I had mentioned this in the last Revisions in Issue 70, but upon taking a quick re-read through the article, I find I completely neglected to say a word about it! I am remiss, so, I’ll take the issue’s article and do nothing BUT talk about it. For those of you who choose to taken part in what I am going to talk about, there will also be homework for many of you. And the test for all the homework will be at the event itself, over 3 days.

So, what am I on about then? Simple. Last year at WSIKF, we managed to pull off some very large Grid based megaflys. Mostly successfully too but, we’re going to refine the whole process this year based on what we learned last year. The goal this year? Nearly twice as many flyers! We’re hoping to reach 100 flyers at once and we genuinely think this is a doable goal (it’s fair game to suggest we’re insane as well, you wouldn’t be the first!).  As always, WSIKF is the third week of August, which for 2010  falls on August 16 – 22nd. People tend to show up during the week, leading to large amounts of people by Wednesday/Thursday.  On Thurs, Fri, Sat, we’ll be attempting to get 100 revs into a grid at various points, so, here’s a quick look at some information you will need to know ahead of time, with any luck.

We quite literally have people coming from all around the world for this event now. We know of flyers from the UK (Hi Felix! Hi Stephen!), France, Australia, Japan and of course, Canada as well. And it goes without saying, a small army of American flyers too! It will –easily- be the largest collection of Rev flyers ever assembled in one spot.

Among the confirmed teams are iQuad, the Decorators, Too Much Fun, Island Quad, Rev Riders, part of the Flying Squad, Team Vortice, and there are even rumors that some of Flic may come from France to be a part of this international effort.

Even if you’re not sure of your abilities as flier, come earlier in the week and we’ll be doing TONS of team flying both traditional and grid style, in order to give everyone a very fair opportunity to ramp up their skills and be a part of this project.

If you were at WSIKF last year, you’ll likely agree that by the time the weekend rolled around, we were really tight on space. Overly so, often blocking the firelanes, much to the non bemusement of WSIKF staff. So, after much discussion, we’ve elected to move the whole party down the beach a little bit, to Sid Snyder Blvd, which is the street the Kite Museum is on. We’ll have MUCH more space to deal with down there, making all this much easier to pull off, while still being close enough to the festival. We’ll likely hold a pilots meeting the morning of each attempt (Thu/Fri/Sat), just to rally the troops and lay out the plan for the upcoming day. While we hesitate to refer this as “MANDATORY” we do think it’s to everyone’s benefit that they show up. Things will change on a fairly quick basis and this will be your best opportunity to keep in the loop.

Do you really want to keep on top of the organization of the event, running up to WSIKF? We highly recommend keeping an eye on the Revolution Kites website’s forum. Any news of note, changes, ideas, discussion, etc will be unfolding there, so, make it a point to poke your nose in once in a while. We know many of you are there constantly as it is, so, this is more for the “infrequent” or “never been there” people.

Here’s the specific forum topic discussing plans for this project :

As the event nears, communication will begin via email with information about what to expect, exact schedules and column assignments for those who put their name on the list prior to WSIKF… Your primary points of contact and chief callers for the grid will be John Barresi and Stephen Hoath, with coordinating support from the other members of iQuad, the Decorators and The Flying Squad.

And last but not least, your homework assignments should you choose to join us for this QUADAPALOOZA of an event! First off, start here. This article was written as an introduction to the Grid style of megaflying, it covers much of the basics involved :

Closely followed by a pair of articles written about last year’s WSIKF :

And last but not least, here’s a recent diagram created by John Mitchell showing how a 10×10 grid would be laid out on the field (click the image for a larger view), both kites in sky and bodies on ground, including reference to the individually colored columns (teams within the grid): 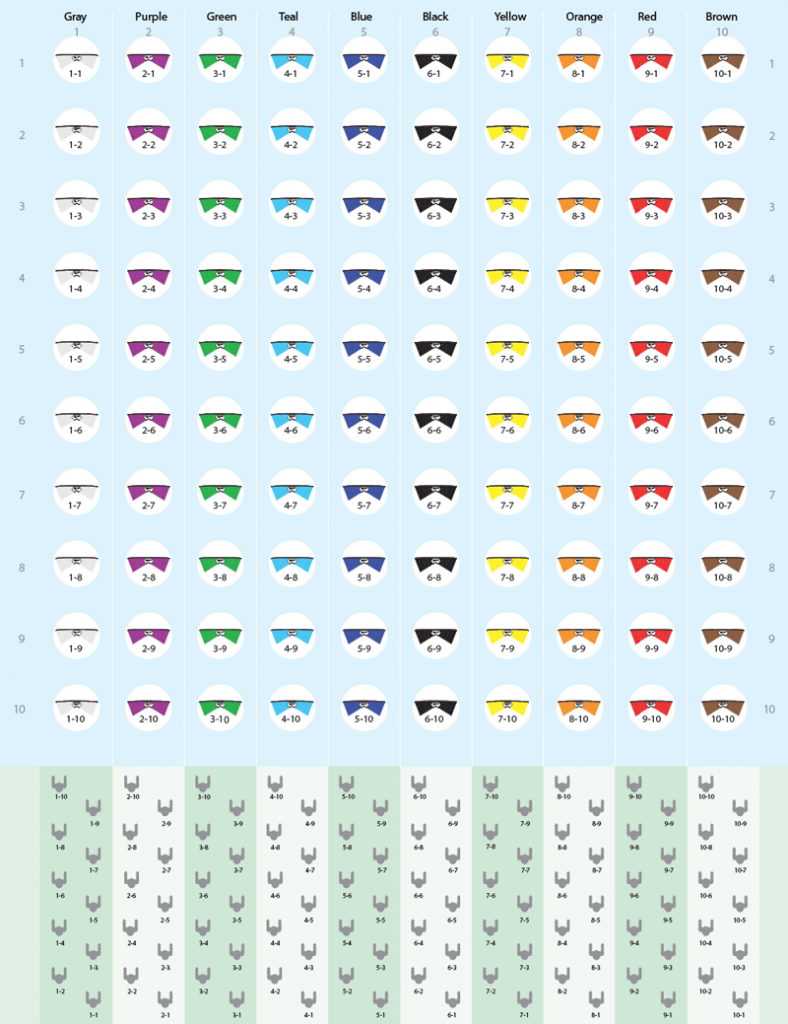 By going through these, combined with John’s pictures in this article will leave you well prepared for what’s going to unfold on Long Beach this august. We truly hope you can come and take part!  Picture yourself in this video but, double the participants!

Here’s to the weather cooperating like last year as well!