Mike Agner, Jim Martin, and Al Sparling were waiting for me at Narita Airport when I landed. I’d enjoyed an intense 36 hours at home — which was much better than the 12 originally scheduled. I’d driven Susie to Portland for her flights to Maryland. (More about that in a future Update). And then I’d flown out again myself to meet the guys for a ten day kite tour of Japan. 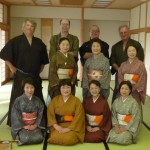 The group invitation dated back to last March when we’d all traveled to Malaysia. JKA President Maasaki Modeigi had asked us to come to Japan in 2010.

Of course, at the time we’d all been bonding a bit in the hotel bar. So I pulled out a cocktail napkin, wrote “Japan 2010” on it, and asked him for a signature. As it turned out, the reminder wasn’t necessary. He called in January to confirm that he’d remembered!

I’d been to Japan a number of times, but for the rest of the team, this was a new experience. We over nighted in Tokyo and then caught the early flight north to Aomori and Fujisaki as guests of the delightful Mrs. Sato and the 15th Aomori Kite festival.

Aomori is known for perfect apples, cherry blossoms, and their distinctive Tsugaru Kites.

We began our week visiting the local schools where we exchanged questions with the enthused and inquisitive kids before helping make them plastic sled kites.

“What is popular in America?” they asked me. “Our new president.” I replied. “Do you know his name??” They all cried out “Obama San!!” and then began to chant “Yes we can!!” — much to Republican Jim Martin’s amusement.

After kitemaking each morning, we joined the students for lunch. Meals were served by the kids themselves and eaten at tables in the classrooms. It was as educational for us as for them.

Wednesday night we celebrated at a Welcome Banquet hosted by the Mayor and School Superintendent. There were speeches, taiko drumming, great food, and lots of sake. The mayor welcomed the Americans, raised a single thumb, and announced “Yes we can!!”….

Thursday (a national holiday) we went to the kite field. Once again the visiting team was introduced and answered questions. Who was the best looking of our group, I asked the kids. They chose Jim Martin.

Local fliers were out in force. Their stunning rectangular Tsugaru Kites are framed in cypress rather than more typical bamboo and outfitted with noisy hummers. We pulled out a few large inflatables. But within the first hour, rain and thunder began. We left the kites on the field and retreated to nearby tents for shelter and then lunch. The fliers and spectators disbursed and finally, we packed up and left ourselves. To conclude the afternoon, the kiters gathered at the Sato’s for a driveway barbecue. 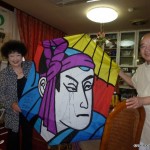 We’ve been staying with Dr. and Mrs Sato in their spacious home.

We’ve slept on futons, eaten too much and too well, and pondered the mysteries of Japanese toilets and bathing. Connoisseur Mike who enjoys fine food and wine has discovered sake and chopsticks.

Tomorrow, we meet with one more school and then fly back to Tokyo for part two of the tour.

This has been a great start to our Japan adventure. Staying in a private home is of course, much different from staying in a hotel. And meeting the kids provides a wonderful sense of how much we have in common as well as an appreciation for how we differ.

And this is just the first of three stops. Next we head for the JKA annual gathering in Uchinada.

Can we enjoy ourselves?? Yes we can!!