Shi means “four” in Japanese. And tomodachi are “friends”. After a week sleeping on futons in the same room, Al, Mike, Jim and I were pretty tomodachi! 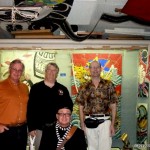 After Aomori, we flew back to Tokyo for a memorable dinner at Modeigi’s, Taimeken Restaurant. We were joined there by Scott Skinner.

The following morning, we flew to Kanazawa for the commute to Uchinada. 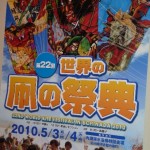 The International Festival on the beaches of Uchinada has now been going on for 22 years. It draws kiters from around the country who each bring their distinctive kites and traditions to the sky.

Remember that each area of Japan has developed their own local kite designs. The Edo comes from Tokyo, the rokkaku from Shirone, and the Tsugaru kite from Aomori. So imagine twenty teams each with different large kites. 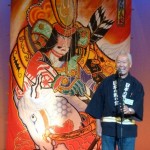 The program began with a grand welcome reception. You know things are going to be good when the curtain raises on stage to present an all-woman taiko drum ensemble and there is a wooden keg of sake in the corner.

Each of the international guests was introduced and then I was invited to join the dignitaries in cracking the keg open with antique ceremonial hammers.

There were speeches, great food, and a fast paced auction. Then we followed one of the local fliers home for a less formal sit-down around the living-room floor.

One thing I love about Japanese events is the sense of community and team loyalty. Everyone wears a team Hapi Coat and the red JKA caps are everywhere.

Japanese events are also very efficient. This one started at 10 am sharp with an opening ceremony, and concluded at 4 pm.

We launched big kites and then took turns guarding them while the rest of our team — in matching coats and hats of course — wandered in to admire the local kites and kiters.

The field was lined by tents and each team staked out an area. Food and drinks were served on low tables. Kites were then assembled on large plastic tarps before being carried out for flight.

Launching was also a team effort. Senior members tuned the bridles. One group held and lifted the kite, while another managed the line. Soon the sky was filled with wonderful artistic creations and loud hummers.

By the time closing ceremonies began, all the kites were down and packed away.

We too pulled our show out of the sky and organized it for transport. The kites were headed for Tokyo. We were going to Hammamatsu. And in Hammamtsu, we would simply be witnesses — right up until our friends there dragged us into the action…..