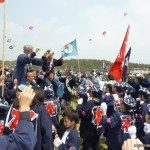 You hear it on the festival field, in the street parades and at neighborhood parities. The chanting is accompanied by the undulating and repetitive pounding of the kite music blasted by hundreds of drums, bugles and whistles. Soon you begin to hear it in your dreams.

Hamamatu is in the throes of a full-blown kite frenzy!

I asked several friends what Wah-shoi meant and each time the answer was different. “Do it!” “Hey! Hey!” “Go-go-go!!”

We began our day early on the kite field. Teams had already assembled and were lofting large paper and bamboo creations into the sky. Each flying team is supported by groups of drummers, buglers, and cheering onlookers — all waring traditional happi coats in the neighborhood colors. More than 150 neighborhoods took part.

The distinctive rectangular kites of Hammamatsu have been made for hundreds of years. Each neighborhood produces several kites in different sizes. The kites are made to honor children born in the preceding year and sponsored by the families. Those families also host the local parties and cover the not insubstantial beer and sake tab.

The flying itself is a finely tuned and deliberate process. With space limited, the kites are laid out for a long-line launch. With a whistle signal, the team captain announces the lift off. Line is pulled in to gain altitude. Then with another signal, line is let out. The process repeats in light winds as each kite maneuvers for position.

Line is managed on large, antique winders that are rolled onto the field with great ceremony. When the signal is given to pull-in, the drumming and bugles begin. Supporters wave their hands or fists in the air. Team members run in a circle retracting the line around a bamboo or metal fulcrum. (much like what we saw in Thailand). When the signal is given for line out, the drumming stops and the line sings through the captains gloved hands.

The primary goal is to bring down other neighborhood’s kites though cutting, tangling, or tipping. But ultimately, I think everyone is there to celebrate and have fun.

In the evening, the teams reassemble and move into the streets for enthused parades. Imagine thousands of partiers marching down the boulevard, wearing traditional costumes, shouting and waving flags or carrying lanterns. Imagine 150 bands, made up of bugles, drums and whistles — all playing the same song. 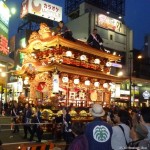 Following the teams are the decorative floats. Each community designs its own elaborate rolling display called Gotenyati. Some are hundreds of years old.

Contemporary floats are illuminated and carry groups of students playing delicate flutes and stringed instruments. They are a startling contrast to the rough and boisterous bugle and drum corps. On top of each float – three stories above the street – are young men with the unenviable task of guiding power lines up and over the roofline.

I was interested to learn at the city kite museum that these floats actually evolved over time from the carts originally used to carry kites and line to the fighting field.