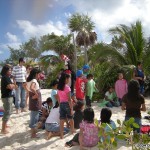 It was the 2nd Annual Festival de Papalotes in Isla Blanca, Mexico.  Now, I’ve been to a few kite festivals first-year events where there are maybe 10 people and somebody’s car radio, before they grow to such popularity that the participants soon outgrow their banquet rooms.  This festival appears to be headed that way.  Only in its 2nd year in such a remote part of Mexico that even the locals consider the beach a gem.

Once again, Charles and Dorothy Stewart were my wonderful host. Sharon Musto and Bud _ from Canada were in the area and popped in to help and play on the beach.  Richard and Marti Dermer were a great addition as festival attendees and comrades.  Melanie Anderson Koening came down to test the skies, and the local authorities….. (there’s a story in there somewhere, believe me.)  Dorothy’s brother, Allan Ross joined us on his first Kiteflying venture.  __ Kite Boarding School put on a great show as well.

This year flyers pooled their money to rent a large passenger van at a very reasonable rate.  This sure saved on shuffling cars, gear, and gave us time to enjoy each other’s company as we traveled.

Charles and Dorothy own a condo in the area, and sharing kites just comes naturally for these two.  With their festival organization skills, it only makes sense for the two of them to share their sport with the locals and carry it one-step further by helping those less fortunate.  We had several orphanages and a local English School attend this year, giving even more kids the opportunity to make a kite, fly a kite and reach into the magic box that was part of “Give a Toy, Get a Smile.”

The kids were great fun to play with it.  My pekito (little) lesson in Spanish still worked,  My vented Revolution. II had a fabulous workout with the diehards in the group retuning repeatedly for a turn to fly, even in winds gusting to 25 mph.  .  Some of those kids had that speedy little Rev. under great stop & slow control. 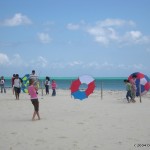 Further up the beach the kids had a few of their handmade sled kites collide and get  all tangled up, but Bud made the most of it, saying, “Ohhh, so you want to make a TRAIN of kites?”  Soon the kids had pieced a long flying train together.  From a distance, I thought it was a stack of kites pulled out of a bag from one of our kitefliers. They flew steady all day.  I think that is the first train of sled kites I’ve ever seen.

Alan took kite-boarding lessons and tried the Revolution kite for the first time. Naturally, he is hooked on kites and plans on getting a Revolution in the near future. Alan made himself handy by helping Charles put up the big kite, and loading gear, even cooking a meal one night for the flyers and always making us smile.  While looking for my pesos to pay a bill, he would stand behind me telling the clerk in Spanish,” Call the police, my friend has no money.”  I think he make a wonderful addition to our kite world.

We met new local kite fliers as well as catching up with a few friends from the past year.. One family told me they had just moved to the area but felt uncertain about it, but now that they found Isla Blanca and kites, they had made up their mind to stay in the area.  Oh yes, the power of kites and sandy white beaches~

You would think that flying in Mexico would be enough of an adventure, but actually, it kept getting better.  The Stewarts had talked me into taking a few days off for sightseeing. Not an easy task if you know me.  My vacation days are like gold and I have more events then I have vacation days.  I took two extra days off. Wow, what we managed to fit into those 2 days!

We climbed a Mayan pyramid in Cobu, Mexico and we wandered the Chitin Itza  grounds around “El Castilllo”, one of the official  7th Wonders of the World,  just soaking up the atmosphere filled with vendors hawking their wares, pleasant weather, and fascinating ruins.  I had no idea I would be that impressed, but impressed I was.

We zip lined over a lake while a heron flew under us, and a crocodile sun bathed below.  We snorkeled in Grand Cenote, which was my first snorkeling experience in the caves with the stalagmites, turtles and fish.  I loved the whole experience, being the last to get out and I’m excited to try this again.   We stopped in Tulim, the third leg of our Ruin’s triangle, but by then most of us were worn out.  Richard and Charles took the shuttle to the ruin, while we did some last minute bartering for gifts. They came back with some awesome pictures which made me a little sad that I didn’t push myself to see this last sight.- a magnificent ruin on the seaside cliff and sun bathing iguanas. 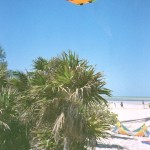 We ate at local restaurants, walked the town at night and had a few adventures.  We revisited our favorite tourist restaurant.  Pericos Bar and Grill – Guaranteed to make you smile.  For those first time visitors here, it’s almost mandatory that you get up and be a part of some silly happening like dancing, marching, Congo lines; all very entertaining for the tourist.  I kept finding someone who wanted to go upstairs to the bathroom, and we’d disappear for 15 minutes..  Finally, my friend Ceri, who told me she had been to Pericos in the past, asked why I went to the bathroom so much and for so long.  I had presumed she had been upstairs, but she had not, so up the stairs we go; finally in a group about 6 strong.  There were frescos, paintings, paper mach’e caricatures, old telephone booths, and jail type cubby holes.  We tried to take pictures of everything, and laughed all night at our antics. 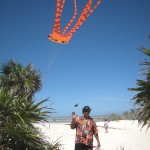 Oh, kites… I enjoyed flying in NO wind at night outside our hotel, on the beach and luckily for me not so much at  Chitin Itza  ~  not so lucky for Melanie, though.  When she tried to bring her Revolution kite and KAP gear for a picture onto the site, the security guard at the gate told her, “No, you can not bring your kite in.”   She went back to the van and put her Rev away, swapping it for a large flow form she had spent many hours making.  Inside, somewhere on the open field of Chitin Itza  she managed  to start putting the kite up.  Some local young men stepped in to help her.  She and her assistants attached the camera, let out some line, and as the camera starts to go up one of the young men says.. “Security is coming., down, down” and Melanie is saying. “No up, up”.. trying to get a picture as quick as she could-not good.  The angry security guard confiscated her kite!  She was lucky he didn’t take her camera, but she had just unhooked it and she begged him not to.   He told her she could come back after the site had closed for the day and see if he would return the kite or not.

Well, even the local young man went to the guard and vouched for her, telling him, “She is not a trouble maker.”  J  (Have you met Melanie? )  lol  We all went back to the hotel and then Charles and Melanie headed back to Chitin Itza  to try and retrieve the kite..  After a bit she came back with the kite, thanks mostly to Charles negotiation skills we heard.  Well, bet that will teach her to put her kite up faster!  Lol  Just kidding. 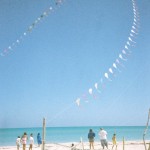 All in all it was a memorable vacation and Kite Festival for everyone involved.  We’d like to send a special thank you to the powers that make it be.  Namely, Charles and Dorothy Stewart for all the work they put into making this happen.  The Restaurant Acapulco for the use of their beautiful beach, and all the volunteers that take the time and make the effort to bring the children out.  Pericos Bar and Grill ~ Such a fun place to share with visiting friends. If you are in Cancun, do look them up!

I hope you smiled while reading this.  I could not get the smile off my face as I went over the memories. Charles said this article should not read like a travelogue, but why not?  Kite festivals and a good cause like, “Give a Toy Get a Smile” are always a good destination.