Following my very brief KAP (Kite Aerial Photography) introduction article, I present you today a few of my favorite images I managed to create with this technique. Enjoy!

Also, after reading, please feel free to discuss and offer your own relevant experiences in this dedicated discussion topic on the Kitelife forum: 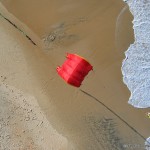 This red Flowform #16 was my first KAP kite, and I still use it today. It is an ideal kite for beginners who have a good supply of wind wherever they live, since its wind range is about 13 ~ 19 mph (21 ~ 30 km/h). It is easy to pack and carry with you, and won’t take much space in your backpack. This picture was taken from another kite, a Flowform #30.

2) Walking in the garden 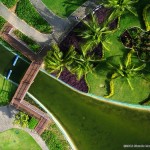 Some places are beautiful but still will look better from above. In this picture we can see a lot that our eyes could’n if we were on the ground. Without much effort, we can imagine the original blueprints of the architects were probably not much different from what we see here. 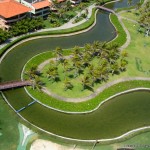 This is another part of the same complex in the previous picture. I can’t help but remember what a friend told me when he saw this image: “It looks like a model! Ironic, considering that once it probably was just a model!” 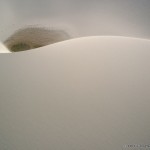 The Lençóis Maranhenses National Park (Parque Nacional dos Lençóis Maranhenses) is a 1000 square kilometers area that at first might look like a desert, but in fact it has many lagoons that accumulate water from the rain. As you can see, the water of this lagoon has evaporated almost completely, but it will get filled again during the rainy season at the beginning of each year. 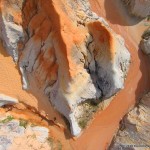 This is a maze of naturally colored sand. There are 12 different colors in total, used by the locals for making sand art bottles and other handicrafts. These cliffs were being destroyed from the excessive removal of the sand, but also by vandalism. The place is now being supervised by the locals to avoid more depredation, and the sand used for art is being collected at another site. Most part of the local population now depends on the tourism, the main reason behind the preservation efforts. 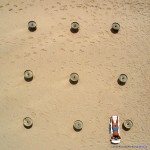 I though this image was very funny and asked friends for title suggestions. Among all the ones I received, “Your Move” was my favorite. A few other runner-ups:
“Tic Tac Toe”
“Tic Tac… Whoa!”
“Check and mate”
“Nine Mexican Dwarves and one Brazilian sunbathing”
And what is your suggestion? 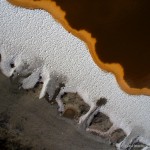 This is a salt pond at the south of San Francisco Bay area. It’s one of the best targets I’ve ever seen for aerial photography! The microorganisms on the water provides different colors for the ponds, from pale green to a rusty, dark red. When there is no person or anything recognizable in the frame, the pictures taken there looks like something out of this world. 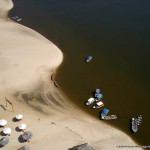 I was walking with my wife on this place when we met a very young local boy (maybe 7 or 8 years old). We tried to talk with him, but he was not very friendly at first – he seemed a bit shy, maybe a bit afraid of strangers, but definitely a bit too grumpy looking for his age. While my wife kept on trying to get a smile from him, I knew exactly what to do: I opened my red Flowform kite, and the boy opened a big smile when he saw it flying! We became friends, at last, thanks to our big toy.

On another note, as some of you readers may remember, my first article on Kitelife Magazine featured heavily around my Nokia PUSH N900 KAP project.

Over the coming weeks Nokia will be launching a new part of the PUSH project with my KAP rig design forming an integral part of the project, alongside the creativity of people like yourselves.

Nokia is asking people all around the world ‘What’s the coolest thing you could do with a KAP rig?’

Initially all you’ll have to do is submit your idea, Nokia will then select the five best concepts, send them their very own limited edition (out of the only 5 produced) PUSH KAP rigs including handsets and also £1000 towards the production of their ideas. Keep checking out http://blogs.nokia.com/pushn8 over the next few weeks to find out more and get submitting your ideas!

In the next issue of Kitelife we’ll introduce you to the five KAP teams and what their projects involve, who knows it could even be one of you readers!