That was the plan, but it came up 36 kites shy yet still broke the world record of 55 by a not-so-shabby margin of nine kites. There is no doubt that the current record of 64 will be broken and to do that Rev pilots from all over will come together to step up to the task. It would be awesome if every pilot in the grid had mad skills and could do this sitting down while taking photos however more than likely, at least for the first few times, it will take the effort of pilots from pro to beginner to make this happen. 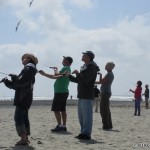 Guess what? The beginners and pilots of average skill outnumber the pros so to put these grids in the sky means EVERY pilot, REGARDLESS of skill level, is important to the success of the grid. Those pilots with the mad skills such as John Barresi, Felix Mottram, Stephen Hoath and others who have worked towards a mega-grid can’t do it without the rest of us.

The mega-grid team is not elite, just like minded, and if you are reading this and have not been in a grid yet WE WANT YOU!

I’m specifically aiming my words to those who may be feeling a little apprehensive about getting in a grid – that is, beginners and skittish people like myself. I know you are out there because I’ve talked to some of you about this very subject already. I can speak from personal experience on this as I worried about being involved with the WSIKF 2010 attempt for just about six months before it happened. Hey, that’s my thing – over thinking! 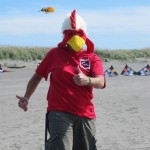 I can tell you I am, at the best, a moderately skilled Rev pilot and I did fine. I can tell you I saw many rookies in the grid and they all did fine as well. Talking to some of them later the common denominator among us was a fear of screwing up, but also a great feeling of achievement when the mission was accomplished and our fears of making a devastating mistake were not realized.

Maybe you’ve only been flying a few months or maybe you have lots of experience at your own field, but haven’t had a chance to fly in close quarters with others so you’re a little (or a lot) worried about your position/skills in this challenge. You want to take part but how do you get past the mental blocks to be part of the majority of average and rookie pilots that will make up the grid? What do you need to know? When is it the right call to sit out and work with the ground crew (also a very important job and not to be under-valued). 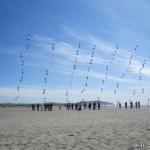 Here is my view and analyzes of a mega-grid. If I can do it you can do it and with a small amount of luck and persuasion on my part you can be relaxed in the process knowing right now, and in advance of the next one, it’s easier than it looks. In actual fact it is ridiculously straight forward, but don’t tell anyone or everyone will want one!

At a minimum you need the basic flight skills of knowing your kite and controlling it – you’re kite can’t be flying you! Some specific, and sorry if it is obvious however this is all about success in this venture, skills are being able to park leading edge down and turn over to fly up, back down, hover, turn 180 degrees on the spot and fly left/right (not uncommon for some to have problems with one direction or the other so work on that). It is also imperative that you can fly with more brake than maybe you are used to so as not to be leaping forward into someone else suddenly. All moves are done slowly so no room for a speed demon.

Yes with just this minimal amount of skill you can be in a grid!

Let’s break the hover down a bit further though as this gets a lot of us stressed when we think of the grid. Ideally you can hover in any orientation for extended periods of time and transition between orientations without needing the whole sky to turn around in. That said, if you can hover in just ONE DIRECTION – any direction – and keep it stable you can still participate. The logic is simple and was repeated daily by the head pilots to all of us. Fly first! If you can hover left or right, but not inverted than hover left or right. Think of the big picture. With 64 or 100 or 120 kites up there no one will notice if you aren’t inverted with the rest of them. The same logic holds true for backing up. Can’t back up into a ball? Fly in forwards and turn for the ball. No points deducted and it still looks great!

The grid will look impressive to all who watch especially when it starts to move and transform but for the pilot you will see it in a different way. Your focus is going to be on your kite and the four kites (or three if you are on an edge) around your kite. Your secondary focus will be on the row and column you’re in so when you move you move as a group and remain lined up. There is no room for looking around except for what you will see in your peripheral vision. Unless you are JB and calling this grid If you start watching a tangle on the far end you’ll be next in a tangle. 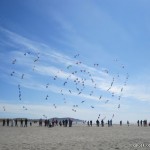 The moves will be slow and simple. Think of threads. Think of concentric rings and slow ball bursts. This is where you want to be in control of your forward and your brake so you can deal with these slow transitions. With 64 kites that is almost six miles of line and no one wants to be untangling that if someone rockets through it all.

Ideally there will be time for lots of practice using smaller grids. We were fortunate to have the time and the people with patience to lead us through this process however if there is not a lot of practice time don’t let that stop you. Re-read what I said about the basics and your own self evaluation and jump in. We started with 4 x 4 grids. This will give you an immediate indication of your skill level and the added benefit of your skill improving when you start to focus on the goal. I personally saw my upright hovers improve while in a grid and saw others go from being unable to maintain an inverted hover to holding inverted hovers for minutes at a time. When you get to the doing part and not the thinking about doing it part wonderful things happen to your abilities! 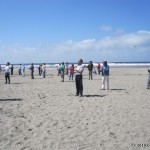 Now, a little self evaluation is part of the overall process. Where do you feel comfortable in the grid? The bottom row and two outer columns have an easy out if you run into problems. If you are a bundle of nerves ask to be on the bottom row. If you need to get away from the ground wind then move up a row. Even the second row from the bottom has some escape routes and not hard to fly in. If you feel comfortable with building the inner most circles because your hovers, transitions and reverse abilities are legendary then higher up is for you. In short, center equals greater control skill required, outwards equals lesser skill with the exception of outer kites near the top. The top flyers must look high and make space without sliding down on top of their columns. Not to say the bottom kites are insignificant. On the contrary, the bottom kites flying low keep those columns from rising up to neck breaking proportions. EVERYONE is important in the grid. Let the lead flyers know where you want to be. Fly first and to your ability is key.

Finally, the hard part of self evaluation. If in the practice grids you cannot keep control and repeatedly fall from the column or tangle lines it is time to do the right thing and offer to work on the ground crew. If need be one of the organizers will ask you to land and help on the ground. It’s nothing personal and nothing to feel bad about. At the very least you will have learned what you need to work on for the next one.

I’ve talked about the technical aspect of flying in a grid and all of it is important for success, but let me finish this with the most important part of all – how will you feel doing it?

To be sure, there will be some nerves. It’s sort of a big deal even if it is all for the fun and you may find yourself flying with your hands by your shoulders at times, but if you must think of it as stressful think positive stress because when that last kite lands everyone is all smiles and any stress you may have been feeling is gone!

Smiles, handshakes and hugs and lots of them! A feeling of accomplishment and pride in being part of something much bigger! There is just… something… about taking part in a big grid that makes it difficult to put into words. Perhaps it’s like a rite of passage, but however anyone can describe it it’s a good feeling to have been part of it and knowing that each kite and each flyer has made the grid possible. My six months of over-analyzing the concept did nothing to make the attempt easier for me and that is why I can tell you first hand it is best to just fly it! Get out there, do it for yourself and your flying buddies. Enjoy the experience. It’s a kite – have fun with it! Break that record!