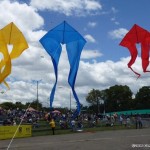 It sounds a bit crazy, doesn’t it? Flying to South America for a weekend. But that is the glamorous, jet-setting life I lead!

Up and on the way to the airport at 2 am Thursday morning. Working with kids in Bogota on Friday. Flying in a park Saturday. Performing in a stadium on Sunday. And then departing for home at midnight Sunday night. I’m sure many of you are jealous — except for the jet-lag thing.

The events in Colombia are organized by Inez and Jairo Uribe of Yripa. Their organization promotes ecology and ethics in the schools using kites as a teaching tool.

Ines emailed me a month ago to ask if I’d bring a team to Bogota. The timing was sandwiched tight between Berkeley and Dieppe. But we support Ines and Jairo and were determined to make the trip fit.

Jeff Burka, Jim Martin, and his son James rounded out the GKPI Team. Jeff and Jim had flown in Bogota last year while I was in Cartegena. Also returning were Paul DeBakker and Lisa Willoughby from Focus Kites, and IQuad. From Spain we had Juan Miguel and Rafa Molina. And finally, there was a team of three from Holland — Albert, Thijo, and Stephan. So along with Steve deRooy of IQuad and Paul deBakker, Dutch was the dominant language at dinner….

Friday morning, after a few scant hours of sleep, we were divided into three teams and sent to different schools. My group met with about 300 children in two waves. We did a short exhibitions and then helped assemble plastic sleds with sticks, bridles, and tails. Then we just stepped back out of the way as pandemonium ensued. Three hundred kites. Three hundred kids. Three hundred different directions to run. And no way to communicate in Spanish!!

My last group were intellectually disabled students. They enjoyed the kites much like the kids we support in South Africa. And often they made their kites better then the “normal” children.

Saturday we departed early for our first flying show.

Our gear was secured in the shadow of several enormous speakers. An adjacent paved area was marked off for sport kite shows. We went to look for ear plugs and anchors.

The main problem was light and swirling winds. Each time a kite left the sky, it landed in an open field and was immediately engulfed with children. And they fell often. (The kites, not the children.)
Around noon, the sky opened up and we were drenched with a sudden sun shower. We ran around trying to cover gear. But running wasn’t easy. Did I mention that Bogota is at over 7000 feet?

The rain left and we tried again to loft wet fabric and dry it in the air. Fortunately the sport kite and Rev fliers had light-wind gear and presented a reasonable show in the main arena.

After nine hours we left the field feeling we had done our best, but not very well. Tomorrow we would perform before larger crowds in the Stadium.

The Stadium was a wide paved space, surrounded on three sides by sloped seating. At the far end was a stage with large concert speakers that rattled the ripstop each time a bass note was played on the music system.

The flying was tough but the kites were spectacular. We saw large patriotic flags, stunning applique, and remarkable cellular kites.

We had a crowd. But we had no wind. So the object was to run kites down the pavement from the stage, across the arena, and out the other side.

Once again, the Rev and ultra-light fliers did the best. Their performances would not have earned trophies at home. But the local crowd here roared approval with each team maneuver.

The GKPI team resorted at one point to inflating an Octopus with a leaf blower. We took turns pulling kites past the crowd. They seemed to tolerate us while waiting for the next IQuad show.

The flying concluded at five on Sunday. We packed gear for transport and headed for the bus. I was scheduled to fly home midnight with plans to head for Dieppe Canada Wednesday. Paul and Lisa would leave early Monday and needed to be in Dieppe a day before me. Jeff was flying mid-day with James. Jim, the Dutch, and the Spanish Brothers would stay on and travel to Cartegena. 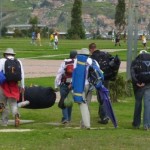 Was it our best show? Probably not. Did we work hard for the results we got? Absolutely. And did the crowd mind. They actually seemed to love the whole thing.

I arrived home to Susie on Monday at noon. — weary and dragging. I’d have 40 hours before the next flight. Ahhh – that jet-setting life-style. Eat your hearts out!