The 2010 Fighter Kite Line Touch World Cup took place on Friday, August 20 at Washington State International Kite Festival (WSIKF) in Long Beach, Washington. The weather outlook for Friday had been ominous all week, with showers predicted in the afternoon after a cloudy morning. So, imagine our surprise when the Friday morning dawned with abundant sunshine and a silky smooth 8 mph N wind. The flyers gathered on the hallowed grounds of WSIKF Field E at 9 a.m. for the traditional pilots meeting. Present were: Richard “Grand Old Man” Hurd, Steve Childers, Woody Woods, Brian Johnsen, Gopal Das, Matthew Spencer, Nancy Bogue (Head Scorekeeper) and this writer. The meeting was short: all seven flyers were World Cup veterans and very familiar with the rules. Because the wind was already *perfect*, there was no need to wait for it to come up as has often been the case in the past. Furthermore, there was a sense of urgency based on the weather forecast which called for conditions to deteriorate as the day wore on. We decided to fly a full round-robin of 5 point matches with all points counting. Guided by “Terry’s Law” (Terry McPherson’s guideline that line touch matches proceed at about 1.5 minutes per point), we figured we could fly the full round robin (105 points) in about 2.5 hours. That schedule would allow to finish up before lunch break, giving us a good chance of avoiding any weather problems that might develop. We used the full complement of World Cup equipment: 13’ diameter circles, divider rope, and FairStart timers to start points, and pre-fab scoresheets which arrange pairings and circle assignments to be as fair as possible.

The first match (Gopal vs. Matthew) began at 9:45 and the last match (Rich vs. Woody) ended at noon, right on schedule (in fact, about 15 minutes ahead of “Terry’s Law”). With the wind from the north and the morning sun low in the east, there was a very significant difference in visibility depending on whether the kites were to the left (in the sun) or the to right of the flyers. Aside from some complaints about temporary blindness from the sun, the competition was almost completely trouble free: few (or no?) debatable “kamikaze” touches, no dangerous situations with flying line near competitors heads, and (thank goodness) relatively little trouble seeing touches. The visibility of touches likely resulted from some combination of the wind direction, the morning sun angle, the brilliantly deep blue sky, and the use of thicker, more brightly colored lines by many flyers. Also contributing to the success of the competition was the willingness all flyers showed to quickly call out when they knew their line had been touched. Between points, both flyers and spectators were treated to a wonderful visual sight in the sky directly downwind courtesy of the large group of Revolution flyers set up just south of Sid Snyder drive.

Halfway through the matches, the two top flyers were on 12 points (Gopal and Woody) and a third was just behind on 11 points (this writer). At that point, the outcome of the 2010 World Cup was too close to call. The same three flyers were at the top of the leaderboard when the final match concluded, with this writer (on 25 points) at First, Woody (on 21 points) at Second, and Gopal (on 18 points) at Third.

The event concluded with the hoisting of the World Cup itself, which had journeyed by mail from Former World Champion Steve Bateman’s house in San Diego, to General Delivery at the Long Beach P.O., to Matthew Spencer who grabbed it there and personally delivered to Field E on Friday morning. 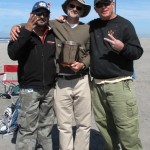 The gloomy forecasts notwithstanding, the weather remained nearly perfect for the rest of the day, with the N wind slowly ramping up to very manageable 12 mph or so by the late afternoon. So, after a well-earned lunch of Dunes hamburger or halibut sandwich, prime rib sandwich, teriyaki skewer with noodles, bread bowl chowder, pulled pork sandwich, giant smoked sausage, or other tasty choices from the vendors on Bolstad, most flyers returned to Field E for a long afternoon of informal flying, World Cup analysis, and good old fighter kite camaraderie. As has become tradition, the World Cup day ended with the entire group reassembling that evening for a gala barbecue courtesy of the Jim, Libby, and Matthew Spencer. It was the perfect end to a perfect day. 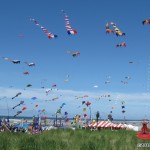 All the World Cup participants extend a special thank you to Chuck Lund, who worked behind the scenes all year long to make sure that activities of the North American Fighter Kite Association remain an important part of the weeklong festivities at WSIKF. Thanks also to Nancy Bogue for once again providing her excellent service as Official Scorekeeper and Point Starter, to the Spencer Family for their generous hospitality, and to the Festival organizers who continue to put on a great event every August.
Fighter Kite Line Touch World Cup