What do you do when you have a huge expanse of beach and a large amount of Rev flyers in Long Beach, Washington? Why, you hold the biggest Rev party the world has ever seen! And what a party it was, a full week of great times, mostly great weather and happy faces everywhere you looked. 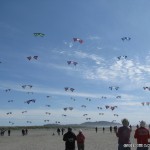 Planning for the Rev megafly at WSIKF this year began pretty much as soon as WSIKF from 2009 ended. As the months went by, more confirmations came in from people that would be making the trip. One of the things we had encountered in the year before was a downright lack of space within the main area of the festival, there simply wasn’t the room to be able to safely stage even 30 flyers, let alone the 100 we were plotting for 2010. So, after some discussion with the festival organizers, we decided we’d stake out the area at the end of Sid Snyder Boulevard, just down the street from the kite museum in what I referred to as “Rev Land”. On some levels, it was a little odd being down the beach from where the main festival was held but, on the other hand, it worked out great. We had endless amounts of space to work in and, our own sound system!

Alas for me, work beckoned and I was unable to make it down for the first few days, I rolled in Wednesday evening but, many people made an entire week of it, arriving on Saturday or Sunday and staying straight through to the next Sunday. By the time I strolled onto the beach Thursday am, there was at least 40 flyers in attendance. There is no way at all that I’d be able to name all the people who were there that week that week and for that you have my apologies. I could have kept notes but, for some reason, I was either playing at being a DJ and pumping out tunes, or, I was of course flying a kite. But, we did have some notable visitors from abroad, including 4 members of The Decorators from England and The Hoaths (and Lummas’ as well, making a 4 person Flying Squad) from England as well. Other Rev teams in attendance included the Rev Riders from the East Coast of the US, Island Quad from Vancouver Island and I can very safely say that by the end of the week, more teams were beginning to form as well.

As I wandered around getting my hellos in Thursday morning, there were little pockets of team flying in every direction I looked, groups of four or more, often with people who may have not even met mere days ago. People who were somewhat leery of the whole team flying experience upon arrival were now comfortable (or, close to it at least, eh Bart? J ). Little “mini-grids”, consisting of 4 columns of 4 flyers had been worked on for the last few days, getting those unfamiliar with the format some comfort before moving onto the “Main Event”, ie, everyone all at once.

In a gesture of good Canadian manners, I made sure to pack some sunshine for the festival as well, which seemed to be very appreciated! The first few days had been mixed showers and cool temperatures but, from Thursday onwards, sunshine was the order of the day and I’d even hesitate to suggest it was even a little warm. Certainly warm enough for me to get out the kilt for a nice comfortable day!

Ah, it just dawned on me as well as I am sitting here in Kuala Lumpur, trying to make sure I get John’s deadline… One of the most amazing things to ever happen to the Rev community occurred on Wednesday evening, just after I arrive. One particularly fine gentleman who’s name is Connor Doran had been working his way through America’s Got Talent and mere minutes after I had arrived, it was announced that Connor was moving onto the semi-finals! The room was packed with Rev flyers and I am sure you could hear the cheers all the way down to Los Angeles where he and Amy were! Again, huge congratulations. I have never in my life expected to see indoor Rev flying get the audience that Connor managed to pull in with his performances. I remain in awe of the achievement, it was simply a fantastic moment for Connor and Amy, and Rev flyers around the world!

Ok, momentary diversion, back to the beach! As the plan was to try and stage the largest mega fly in the world sometime on Friday, we setup a 6×6 grid on as a “practice one”. And the work that had gone on earlier in the week paid off in spades, the grid went up quite smoothly and everyone involved had a great time. No incidents and every person involved seemed pretty comfortable with the format. Excellent calling by Mr. Barresi kept us all in tune with each other and we called it a success and the perfect warmup to Friday’s first large attempt with as many people as we could round up. 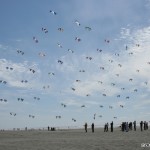 Friday dawned into another beautiful day and the anticipation slowly grew as the day went on. Finally, as it turned into afternoon on the beach, we were ready for the first big attempt. And what an attempt it was! We managed to get 64 flyers up in an 8×8 grid! Filled with both people who have flown this format and similar sized efforts and people who were utterly new to the whole idea. And again, there were few, if any issues whatsoever. We staggered the lineups in order to have a more stable start and this really made a big difference with 16 groups of 4 across 2 separate lines of people. Once the two lines had gotten up in the air, we slowly merged the two lines together, resulting in the awe inspiring site of 64 revs up in the air. I can still hear Bazzer snickering as he counted the amount of kites he had handmade out of this massive group!

Ah but, there was a certain irony for a few of us, John in particular. After John had spent many month organizing the million little details that were required to mount this extraordinary display, John, myself, Stephen Hoath and Felix Mottram didn’t actually get to fly in the large grid. John was announcing and the rest of us were popping all over the field, dealing with little things, herding people into the formation, cajoling along the timid and essentially herding the cats as it were. I also took a camcorder out and filmed footage from many different angles. But, sincerely, I doubt any of us minded one bit, we still felt a part of the effort and rally, the smiles on our faces as it all came together were a mile wide. It was just one of the most amazing sights I have ever witnessed with that many sails up in the air all at one time. Some stats! 64 kites, 128 handles, 320 rods, and a staggering 30,720 feet of 90lb line, which is 5.8 MILES! Likely enough to stretch from one end of town straight through to the middle of the peninsula! How’s that for some numbers!

After a spectacular night fly with the fireworks on Friday evening and an awful lot of celebration, the initial plan when Saturday morning had arrived was to try and best the 64 revs later on in the day. It was another gorgeous sunny day down on the sands and little minigrids and teams were scattered around the beach all day long. The mood was great and it was a really nice, relaxing day. But alas, the wind never really came up during the day making for more challenging conditions for the afternoon attempt. We still managed to get 60ish kites up however, and this time, I actually got to participate. We used the same manner of launching, setting up two rows and then merging them together once everyone was in the air. Despite having a few less people, the sight itself was just as impressive and just as much fun. While our initial goal was to try and reach 100 kites in the sky, I don’t think anyone at any point felt like it was any less of an accomplishment to have reached 64 on the Friday, it was still the largest amount of Revs ever hoisted aloft at one time and it will likely remain a tough number to beat for the foreseeable future. And, it’s a number every single person involved whether they were flying or helping out, can remain proud of for many years to come.

Sunday rolled around and we had all decided it was time to invade the main festival once more, putting on demos in the main field from iQuad, The Decorators, Too Much Fun, Rev Riders, The Flying Squad and last but, certainly not least, Island Quad. It made for a very fun way to wrap up the week of Rev mayhem and as I drove off into the sunset later on in the afternoon, it was with a smile that didn’t slip off my face for many days to come. Even looking back during this article brought back all those smiles, provided by all the people I met and flew with during my time there. Thanks again to all who participated and I look forward to seeing all of you again, on beaches around the country.