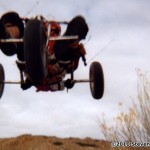 This is a photograph of Jeff Howard at El Mirage in 1998, and I have seen it around the internet for many years now, but do you know the story about how this photograph came about?

Andrew Beattie had planning to go to El Mirage in January 98. I found out about this at Berrow , one of the UK’s great buggy meets in 1997. We chatted about it and the group finally consisted of Andrew, Matt Hurell, and me.
This was my first buggy visit to the USA, and I’d been itching to get to the legendary El Mirage Boogie Buggy Thang!

That year it had been raining and the lake was mostly “wet”, so Corey Jenson had to organise the use of the rough areas near the entrance road.
During the week folks went off on forays along some of the dirt roads, and Jeff Howard was looking for a few hills to jump off.

Our arrival prompted Jeff to pull off more spectacular jumps, and I decided to take the opportunity to get some photos, while Dean prepared Jeff for the next big jump.

As Jeff powered up to the hill I had this great idea to throw myself at the base of the hillock and take an oncoming shot, and then duck down to avoid getting hit in the face…and blow me it worked! (Hence the photo above)

The second shot was a fluke… I just rolled over, as Jeff flew over me, and took the shot of his arse!

It’s not composed or even fully in focus but I was too busy trying not to get run over at the time. The camera was a Kodak disposable film job, so I was amazed that they came out at all!

The other shots are of Jeff leaping all over the place!!

Not long after, one of his rear wheels sheared off….I think it must of happened after this shot.

He asked around to borrow someone else’s buggy, as he was really in the groove, but he had no chance!!! So there was nothing for it but to pack up and head back to camp.

Cory fancied buggying back along the road and asked Andrew if he could borrow the brand new Flexifoil Skytiger he had bought with him. So Cory set off ahead and we piled into our van and followed the road back, only to come across the sorry sight of Cory with the kite wrapped around a Joshua Tree!!!

Now Cory could have been forgiven for this error save for the fact that this was probably the only tree within 5 miles!!!!! 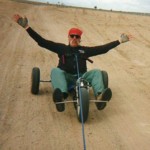 It took a bit of untangling, but the kite was a mess, so Cory was forced to being pulled back to camp on a length of rope, behind our van!

So that’s how the photograph came to be, and it is one of the many great memories I have of that crazy trip!