Yes, it’s November – which means the whole house will be in an uproar! Nearly EVERYbody in the Northwest that competes in Sport Kites will show up at our door – even if they’re NOT staying with us!

Lemme see now… We’ll have all available beds filled. We’ll have people sleeping on all the sofas and the floor. We’ll have a whole mob of kids and a few adults in the Hot Tub. The refrigerator door will get a real workout, we’ll have cars stacked in the driveway and out on the street too, and our one “community” bathroom will have a waiting line again.

Time for me to think about just helping out when I can… and “hunkering down” out of the way when I can’t! 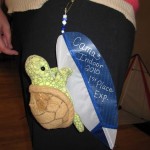 For weeks now, Theresa’s been sewing “feathers” for the awards, and we’ve burned up many cellphone minutes getting this whole Camas Event organized.

And 99 percent of it has been on Theresa too. So, since the house will likely be all topsy-turvey and I will probably bite my tongue a time or two in order to remain “Politically Correct,” I’d best get my attitude knocked into shape.

Yup – We’re gonna have a bunch of folks coming to town. Why – you ask?

Well… because it’s time for the Camas Indoor Kite Festival on November 6th and 7th, and The Kite in our garage is both the official “Sponsor” and the closest kite seller to the High School in Camas, Washington – THAT’s why! And so it came to pass too! 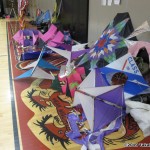 Of course, this event IS kind of unique… As far as we know, it’s the only competition event in the country that a kite pilot can attend that offers four (4) comps in a weekend. Want to build up your scores? Do you need those “attendance” points? Well, a good run at the Camus competitions will likely be enough to get you on the invite list for the AKA Grand Nationals next October.

So flip it around and ask yourself… Can you afford NOT to go? Well, not if you live in the Pacific Northwest, you can’t.

Therefore – we will absolutely have a houseful of people!

Now, I make it out like it’s a big chore… but for me, it’s really not. Indeed, Theresa has all the organizational stuff down pretty pat. So I honestly think that her sewing up the “Awards Feathers” is the toughest job of the whole deal.

And for me – it’s the one festival I attend where I can sleep in my own bed and shower in my own tub! And travel expenses are darned minimal and there’s no lodging fees to pay either. So from that standpoint, it’s pretty darned sweet!

Well, comes the end of the week, and folks start showing up in ones and twos… Toby Arndt and Christian Slater to start with… and by the time we’re done, we have Amy and Connor Doran in our spare bedroom. We have Bob Wendt, our announcer for the weekend on the day-bed in the living room. And Penny Lingenfelter thought about sleeping in her van, but she may have used one of the sofas inside instead. So we had somewhere around six or seven additional bodies hanging out at our house.

Anyway, come Friday at about 5 PM, we all head out to Camas High School about 15 miles away. It’s “Open Gym” time, and all of the real “gathering” would take place out at the High School. So those competitors could spend a full 4 hours practicing their routines if they wished. Mostly though, it was just time to fly a little, and hang out with your “kite buds” again. Gosh – it’d been a whole three weeks since we’d all seen each other at the AKA Grand Nationals at Seaside. But it was nice to see all these folks again anyway – then back home for some store-bought pizzas on the kitchen counter and all of the youngsters got into their suits and climbed into the Hot Tub to relax. But it wasn’t very long before nearly every available horizontal space had a body resting on it – and that meant I needed to be careful where I walked when I got insomnia at 3:00 AM… So I just slept the night through like the rest of ’em, instead!

Still, I got up and stumbled off to the coffee pot at about my regular time. I had a minute or two delay to use the bathroom, and I’m good with that. And the next thing you know – they’ve all cleared out, headed for the free-fly warm-ups in the Camas High School gym – and I have the house all to myself! Hey – this isn’t so bad after all. So I had a chance to wash up all by myself (my usual practice), and headed out to breakfast at the Lakeside Chalet in Camus. Since I WAS going to a festival, I therefore figured I rated breakfast “out”, and the Lakeside is a very good place to eat breakfast. And by the time I arrived at the High School, it was like 9:30 AM. Shucks – the comps weren’t scheduled to start until 10:30 AM so I actually had plenty of time. 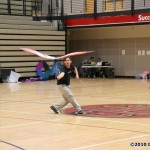 So Bob Wendt scheduled a couple of demos, and everybody got into their “comp” mode, and the whole event just fell into place just like it always does wherever the event is held. Yes, the Comps did start at 10:30 AM – and they finished well before noon, too! Everything done with dispatch, and all the folks pitched in an helped. No surprises there, and the only mystery was who’d won?

Well, we’d find that out later in the afternoon. Time for LUNCH! Oh, Boy! 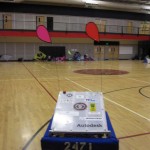 So the entire kite-flying community wandered out about 100 feet to the “Commons” area of the Camus High School (which obviously replaces the “Cafeteria” in the High School I attended in never-mind how long ago), and ate Gyro Sandwiches, with lamb. Yummy stuff – and a good deal for a bunch of future “robotics” engineers, too. Camas Indoor Kite Festival

The “Camas/Washougal High School Robotics Club” were our “sponsors for the event, and their participation got us into the facilities for free, and also got a “lock” on the ticket sales revenue and all the concessions for the weekend. As a guess, the kitefliers contributed maybe $300.00 give or take toward their next batch of mother boards, and servos, and tracks, and other robotic gizmos. They’re an extremely nice bunch of youngsters, and it was fascinating to watch their “robot” fly an indoor single-line kite around the gym too! GOOD SHOW, kids!

Then it was right back into the gym again, and back on the hunt for some more points and medals. Still, one of the nice things about an event like this is seeing “Demos,” rather than the “Comps,” since competition routines are made to impress “judges” while demonstrations are meant to show the audience what indoor kites can do – so the risk-factors are often quite different. And so we get to see people try a wider variety of stunts and flight movements in demonstration flying – and we also see more costumes in the demos, while attire is generally a bit more subdued for competitions. Gosh, we’d have likely missed Dick Curran’s new “Mauve” velvet suit if all we had were competitions.

The suit is magnificent, Richard!

Still, the comps began again at 2:00 PM and were done by 3:300, which left time for some more demos before we went to a final round of demonstrations and finished up in time for the day’s “Awards” by 5:00 PM. So who won? Gosh, I have no idea who the big winners were, really… I’d suggest you check out the Northwest Sport Kite League at http://www.nwskl.org if you are really interested in the Scores and Places…

Anyway, so it goes… All went according to schedule, with no problems at all. So we were all out of the High School by 5:30 PM. Then it was off to dinner at the “New King’s Kitchen” in Vancouver for a group dinner, followed by the majority of the fliers heading over to our house again. More Hot Tubbing. Lots of good quiet conversation among friends. And the mediocre attitude I’d had earlier in the weekend had shifted around so that none of the folks bothered me at all anymore. Indeed, it was fun having these nice people into our home. And before very long, each found their way to get a little rest. Tomorrow would be a bit long for some of these people, since most of them had a few hours to drive tomorrow evening.

Sunday was pretty much a repeat of Saturday, with few exceptions. Oh, I still went to breakfast by myself at the Lakeside Chalet. And we still ran two competitions with a Gyro break in between plus plenty of demos… Connor Doran still attracts some folks in the audience due to his stint on America’s Got Talent,” but much of that is waining now… It’s not dying off very quickly but the public is not anywhere near as aggressive as they were when he was on Television every other week…

One of the very pleasant events that occurred in Camas this year, was that Kirstie Hayes decided that she wanted to compete, using a Borelli “Glider” that she’d built. So she put her name on the competition list first thing Sunday morning… And, you know, Kirstie picked music to fly to that was attractive, yet slow enough that she could actually match the glider’s pace to the music… And I’m darned if she didn’t pull it off too. I stood there and watched her fly both those routines and marveled that a “novice” could fly so well, and with such grace, and at the same time, with a lot of passion too. So Kirstie did a marvelous job, taking two First Places in Experienced class – one for each competition in the afternoon. Not bad for the first competition she’d ever entered, ‘eh?

Well, finally the Camas event was finished, all the awards were handed out, the sound system and he robot were moved into their “transport” vehicles, and the kites and the people were all packed up… So – as is the custom – we all headed out to a local restaurant to eat together before we separated and headed for home. It’d been a fine, kind of “low hassle” festival for me – and it’s kinda nice to be able to attend one almost in your own back yard, too!

I hope you’re interested in joining us next year… It’s a good bit of fun, and helps keep kiting alive and growing! And they are fun folks to be around, too! See you there next year?