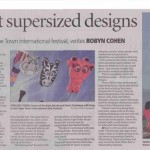 I’m sitting in Boulder Beach near Cape Town in South Africa. We’re out on the deck and among the stars overhead is the Southern Cross. Our group is enjoying the end of a long day. In the distance, I can hear the penguins baying.

South Africa is a remarkable country.

On Thursday, we returned to Khayelitsha.

This Cape Town suburb is a rambling stretch of small cinder block houses and a mass of corrugated metal shacks. I’m told that over a million people live here. Our hosts, the Cape Mental Health Association, operates a facility for disabled children, most of whom are left alone each day while their single-parents search for work.
Township

It is impossible for me to imagine what life is like for these kids.

We park in a dusty, windblown open space called Peace Park. A few inflatable animals come out of their bags. Susie and I set up Bols and invite the kites to play. The reaction probably would have been the same if we had just landed from Mars. But the crowd — and the smiles — quickly spread.

The main festival is held in Muizenberg about an hour from the city center. International participants this year include Bernhard from Germany, Petra from Switzerland, Jon and Gill from the UK, James and Eva from Indonesia, Karl and Sabine from Austria, and a group from Malaysia. There is a great group of SA fliers. Oh yes, Susie and I are here too. 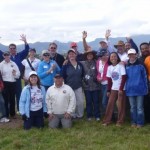 The purpose of the festival is to promote the Association and mental health. The connection to kiting is a natural. But I’ve never seen so much media at a kite event. All day long, we are cornered by print reporters, video journalists, and local celebrities filming segments for shows we’ve never heard of. We keep talking and answering questions. For all I know, I spent an hour with the South African Opra.

One reporter asked if I flew in. “Yes.” I replied. “It is a long drive from the USA.” We both laughed.

The festival is fun, promotes awareness, and is also a fund raiser. There are vendors, rok fights for sponsors, banners, and a small charge to enter the park. I’ve been to few kite events that successfully collect an admission fee. But Saturday, over 20,000 people paid to come and see us fly.

All the time we are watching the weather. Storms have been forecast and it is a long way to come for a rainy kite day. But the clouds burn off each morning, the sun comes out, and the winds blow firmly off the nearby beach. We put up a nice show in the main field.

I’m intrigued by the traditional kite competition. South Africa has no indigenous kite. But the population here is a blend of cultures — African, European, Indian, Malaysian. The kites combine elements from many of those regions but also exhibit unique developments. For example, Malaysians were brought here as workers 300 years ago. They came with kite designs. We saw examples on the field that had been adapted for stronger winds and different conditions.

One can imagine that shifting or the relocation of populations, commerce, the blending of cultures, or simple sharing of gifts or recreation – evolving over hundreds of years – might have similarly resulted in what we now consider the “traditional” kites of many nations.

We also inspected the children’s kite competition. I’ve reported before how CMH provides blank kite skins to schools and invites children to decorate them based on an annual theme. Classes then bring the skins to the festival where they are assembled into arches and compete for cash prizes for the school.

I love the idea of the kids working as teams. And I really love the program of coordinated 30 teams rather than 300 kids running in 300 directions dragging 300 kites behind them. 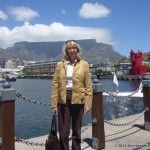 The festival ended Sunday and the kiters said their farewells. It had been a flying success. Our friends at Cape Mental Health had raised some important funds and also awareness of their cause. And we’d shared a lot of kite fun with a lot of people.

Susie and I are off for some personal time before returning home on November second.

Trust me. This has nothing to do with teddy bears.

Paper is, of course, made from natural fibers that have been broken down. And what better way to break down vegetation than to digest it. See where this is going??

On our last trip to Cape Town, we learned of a factory producing paper from exotic animal dung. We were also aware that our friends at Cape Mental Health were hiring some of their clients to make miniature kites in a workshop which they then sold at the festival. We immediately suggested they use some of this fancy paper to produce unique kites which could be sold in all the tourist stores.

Upon our arrival this year, with much fan fare, we were presented with the very first of the “Poo Kites”. The larger model is about 8 inches and the smaller ones about 4 inches. Both are certified to be made with authentic African Elephant dung.

We have been able to secure the first 50 kites in each size and will be bringing them home. Each will be sold with 100% of the proceeds going to help intellectually disabled kids in Africa.

What better gift for the kiter that has everything?? Poo Kites are a worthy addition to any collection. Of course, we don’t promise that they fly worth a crap!

Small kites are $5 and larger ones $10. Buy as many as you want! Shipping is a flat $5 per order. Email us in the next two weeks and we’ll ship as soon as we get home. Quantities are limited.