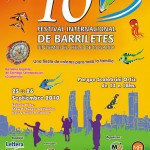 Hi friends; Ariel Carnevalli had a dream ten years ago which has developed year after year to become truth. Ariel has organized this Festival with the Rosario´s Municipality and I assure that it is not easy to keep this in Argentina.

The Festival has evolved successes and misadventures year after year, where some local pioneers of this sport can see things that others cannot and imagine a future that they are willing to realize.

They are called as “utopian” and in fact their thoughts are different from us.
These “utopian” spread his madness …

I would like to remind one of them, José Luis Baldesari. José and I shared a lot of things… was one of the Alto Vuelo Kites founders. José was one of those guys who transmitted his passion to the majority of us that transcends the boundaries of rational.

It was one of those guys who spent 8 or 10 hours a day teaching Kite buggy, also rush to 95 km / h without helmet in his buggy … and also flying his favorite dual: “Cursor” kite; designed for beginners by Guillermo Fernandez co-founded of Alto Vuelo Kites.

Jose said: “This kite is a gun”…expression that means his thoughts about feelings.

The facts come up; one to another, experiences and visions are contagious.
At the same time there were “other utopian” that would become of BaToCo´s founders, Barriletes a Toda Costa Asociación Civil – they mark another way.
BaToCo, focused on kite making, workshops and kite giants flying has evolved over time.

Particularly, from the 10 festivals organized by Ariel, I have participated in 7 and always find something new, every year.

Ariel told me: “I prefer doing and making a mistake than doing nothing”
I remember my first presentation at the fourth Festival, as it were today. That day I flew two kites “Funky” made by Alto Vuelo. The wind was so light like my experience; that my demonstration ended very quickly.

Nowadays I realize that from that time I became a passionate kite flyer.

All of us began to specialize according to preferences and skills like:
Team (El Fabuloso Team, Freaks Team, Contra Viento), Freestyle, Quad lines, Fighters, Windless, MKF, Giants and KAP.

From my point of view we reached a break point, we got experience but not enough, we have to continue doing and learning. 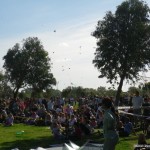 The 10th International Kite Festival Let´s painting Rosario Sky met 50,000 people who flew kites in family. That indicates that the pandemic continues. Maybe some of them could be the future pioneers.
Recalling history; we realize where we came from and when we are going.

I think that next International Rosario´s Festival 2011 is a new challenge for Ariel where they may mark the beginning of a new decade of our sport in Argentina.

Scalabrini Ortiz Park was the arena where the sky was painted with wind´s colors.
The audience was amazed from opened with Patriotic kites, to the end at night with bright kites.

My daughter Edna, who is 4 years old help me flying it.

It was very special moments to me feel her tender hands on the controls, close to my hands…. When flying with your children you get excited even more.
The whole sky was draped in blue and white, with kites one, two and four lines in time to Aurora patriotic song.

“La Banderola”; distinctive BaToCo kite, flew high and stable. All of us could distinguish the details of the sailing paintings from land.

Regarding multiple kite flying, I would like to say that this time with my son Nicolás, have decided to improvise a routine. It was a challenging and motivating for both of us. Nicolás flew with Revolution 1.5 the first part of “El Condor Pasa” song and I joined at the second part with my 3 Quantum Pro

At evening the Festival went on. The lights turn on and the music continued playing.

There was no schedule to fly. The venturesome audience could see that the kites do not sleep at night.

After the activity on Saturday, we meet to share the meal schedule. In a relaxed ceremony of thanks, the Municipality of Rosario, and Ariel Carnevalli gave us diplomas and souvenirs in recognition of our participation.
El Alma del Piloto gave Ariel Carnevalli the replica of the Revolution Indoor Patriotic colors, made by Claris Skoczdopole as recognition for the commitment and tenacity, demonstrated during these 10 years.

Our young pilot Ezequiel Fernandez from Freaks team comments us:
It was a wonderful Kite Festival. As for the activities of acrobatic kites, we had the presence of the two Argentinean teams. The team Contraviento flew their choreography with acrobatic kites an stacks six kites, on the other side, Freaks Team performed the Ballet that used to compete at the World Championship in France and also flew pair routines (two lines) and individual (four lines).

The megateams were performed at midday and at the end of each day. This year was realized for the first time a night flying, having single line kites and stunt kites all lighted in the sky of Rosario

Sunday was a sunny day and the wind blowed laminate, we could fulfill the schedule with all our kites.

At the end of the Festival; all of participants got a new recognition from organizers and from warm audience applause. I would like to emphasize theEl Alma del Pilotocommemorative plaque to BaToCo held by its current Chairman, Roberto Cassanello.