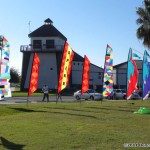 As is now the tradition, the Coastal Bend Skypirates coordinated the date of the Great Texas Kite Club Fun Fly again this year with the City of Rockport’s Christmas season opening festivities that included tree lightings, parades, musical venues, and fireworks. What began as a statewide kite club invitational fun fly in 2006 has grown to a kite extravaganza for the crowds that cruise the Heritage District for the annual celebration of the opening of the Christmas season. Originally set in January, the date was moved to December to get better flying conditions and to add to the numerous events the City plans every year. The City provides the field rental and insurance for the kite event in exchange for the attraction value the numerous kite displays provide. There’s a novel idea, right?

By popular demand, all the kite fliers met Friday night at China A restaurant and had a nice meal and caught up on gossip. Saturday morning, we had coffee and breakfast together before arriving at the field to almost no wind, but sunny and warm nonetheless. Everyone backed up their vehicles to the field and began unloading all their goodies. While we waited for wind, the field came to life with banners, flags, arches, ground bouncing animals, spinning flowers. As the wind began to move, it became primarily a single-liners day with lots of line laundry and as many large and small kites as we could fit while still maintaining air traffic control. We had a contingent of sport kite fliers this year for several hours over on the adjacent field lovingly dubbed “the dog pound.”

By 11 a.m. we had enough breeze to get a good contingent of kites airborne.

There were several momentous events during the day starting with Dick and Sis Vogel from Grinnell, Iowa, assembling and launching their first Cody kite. They acquired it at a kite festival auction earlier in the year and waited until they were down our way to break it out. It flew nice and steady all day as Codys do. They also had the maiden launch of their new inflatable parrot flown along with their new HQ flow foil. Very nice display. The Vogels spend the first half of their winters in South Padre Island flying with SPIKE and the second half in Port Aransas flying with the Coastal Bend Skypirates, so they have dual kite club membership.

Terry and Kathy Cornell of Kingsville, Texas, also fly with both SPIKE and Coastal Bend Skypirates kite clubs. TeeCee, as his call sign goes, was not to be outshined, so he put up a varied assortment of parrot kites and a “one off” Rok adorned with Jimmy Buffet’s likeness. TeeCee gave an amazing demonstration and later gave lessons in the art of flying two fighter kites at the same time, an impressive sight to see indeed. TeeCee made it look easy.

We had one “old-timer” show up in a full costume of the proverbial pirate. Tom Farnsworth from Rockport, a seasoned competitor of the 90’s as well as a long time member of the Skypirates, came out to fly, but alas the wind died before he could find clear airspace and get launched. So goes it. The early birds get all the worms!!

John and Laura Shamrock flew a fantastic club kite ensemble representing the SHARK group of Houston, and they have a magnificent set of matching SHARK club feathers, a club wide project that really turned out super!! SHARK knows how to represent!!

SPIKE members Jeff and Donna McCown put up a very nice array of handmade creations, some even of their own design. Especially impressive is an Aztec theme created by Jeff and Donna’s Texas flag genki. It is rumored that half their house is dedicated to sewing at times. Go figure!! Sound like anyone you might know??

Around 3 p.m., kites began to slowly drift to the ground due to the wind shifting and dropping to 2-3 mph. Made it easy to start packing the toys away. As each kite was being rolled up and put away, one lone kite stayed afloat until the very end, the Texas Genki, which was only right since it was the Texas Kite Club Fly after all. As it finally began to slide down to the ground, it was official that the kite fly was over. 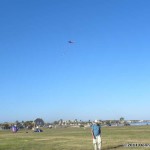 Since we didn’t want to lose our primo parking spots for the upcoming Christmas parade that evening, we decided to have pizza delivered to the field. When we finished eating, we circled our chairs around for a kiter pow-wow and visited up until time for the evening’s events. The lighted boats were too far away to be seen from our area, but we were able to see a couple in the marina. The street lighted float parade was fun to see. Santa arrived riding a ladder truck by the fire department! Lots of candy was thrown our way. After the parade, a thirty-minute fireworks display had the crowds and the kite fliers mouthing the usual aaahh’s and oohhh’s as they were reflected on Little Bay’s still waters. It was spectacular to see, and lots of cameras were trying to get the images saved for future use.

Sunday morning evidenced the reason for the sudden wind change the day before. As is normal in South Texas in December, a northern cold front moved in, and the wind was cold and sharp. So most fliers found alternative entertainment for that day or simply had a late Sunday brunch and proceeded homeward, all expressing no regrets and thankful for a great day of kite flying.

Speaking for the Coastal Bend Skypirates and the City of Rockport, we wish to thank all the pilots who came out, put up their great kite displays, and made the event a huge success again this year. The tradition was carried on one more year, and the “attaboys” are still coming in from spectators and event organizers alike, looking for your kites to be added to the Great Texas Kite Club Fun Fly next year!!!