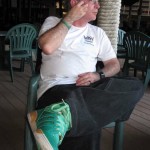 What to write about in the dull winter months between festivals? Actually, truth be told I could talk about how 4 of iQuad rolled into South Padre Island earlier this week to get some practice in only to be essentially shut inside due to the freak winter storm that’s going on all around us. But that’s no fun now, it is?

But I was just on the phone with John, cueing up the last few details for this issue and he dropped an idea onto me and it involves someone who is sitting mere feet away from me. So, I will write this IN SECRET because he has no idea at all what has transpired at the KTAI awards last night…

For nearly all of the last 20 years, if you bought a Revolution kite, the odds were incredibly strong that the kite was manufactured entirely in the Rev offices down in Sandy Eggo, California. Really the only ones that stepped outside of this were the Masterpiece series which began a few years ago. Out of all the gifted artists that have participated in this progam, producing some of the most beautiful Revolutions that have ever been seen (and hopefully flown, you DO fly your own Masterpieces, don’t you?). But, one particular “artist” has managed to stand out, producing a wide range of gorgeous sails and some of the most distinctive. He has now outfitted most of the “big” teams, whether here or in Europe. He made more than 70 kites himself in thi past January alone.

I just cheekily asked him how many he felt he made last year alone and we have established that he likely made close to FIVE HUNDRED kites last year alone. He’s made roughly 1000 over the last couple of years and his crowning achievement is flown by nearly every serious Rev flyer in the world. I was pleasantly surprised to find lots of his work in Malaysia. Everywhere I have ever brought out one of his pieces, people have been amazed by the construction detail that this young lad brings to his kites. I fly nothing but his kites at this point in time and I’m certainly proud to call him one of my best friends too, I have traveled the world with the little crumpet and wow, if I wanted someone to have my back in a bad situation, he’s the guy.

So who is this mysterious person? Why am I prattling on about his awesomeness? I’m pretty sure most of you have already guessed who I am referring to, but, while I’d say nice things about him any day of the week, I JUST heard that the Revolution B Pro has won “Kite of the Year” for 2010, so, CONGRATULATIONS Mr. Barry “Bazzer” Poulter!

Although the core B-Series design may have come from John Barresi, Bazzer most certainly deserves this honor for the level of construction and detail he puts into each and every one.

I can’t wait to see what you come up with next, because I know it will be another superb kite. Some of you may not be aware that Bazz’s skills go way beyond simply making Revs, pop over to his website and see some of his award winning single line kites as well. If you ever happen to be in Lakewood, visit him and spend some time in his trophy room. He’ll find out all about this tomorrow and for the moment, I’ll just quietly snicker as he hands me a coffee 😀 Thanks B! Here’s to your next 1000 Revs!

Ok, enough about him already eh? I’ve been cooped up in a hotel in SPI with him for DAYS so, onto something more fun 😀 Ok, fine, one more Bazzer topic a continuation from the last Revisions. South Padre Island is known for it’s stiff winds. Most of the times I have been down here (this is visit #5!) I have usually spent most of the flying time on vented kites. I like it, it’s a lot of fun flying without having to be concerned about low winds but there’s been times when it’s been a bit TOO strong for even a vented kite loaded down with 2 leading edges. So, what better festival to debut the iQuad set of XTRA Vents?

Another Bazzer innovation, we brought ours out on Tuesday for some flying in 30mph+ winds. On 3 wrap rods. On 90 pound lines. So, ya, these kites can take a true pounding in the wind. I will say that if you are in 30mph, go for the 4 wraps and 150 pound lines. We didn’t break anything but, hoooo boy those lines were singing. All the XTRA Vents are hand made by Bazzer and they are just gorgeous kites. And they handled great. For reasons unknown to me, they handle just about as crisply as any Rev does. Pricey? Ya, but I can say they are well worth it if you regularly find yourself in winds beyond 20 mph.

And with KTAI being over and done with now, the Rev B2, the first redesign of the original Rev II is now officially released to the public. I have yet to get any time in on one yet, but, its essentially a B panel arrangement that’s been run through the shrink cycle. John and Takako have flown them a lot and they really like them. I’ll likely get some time on them in the next week or so as well so, look for a full review next issue of Kitelife, the magazine that also won Promotional Effort of the year for the KTAI!