Oh yeah, not being lucky enough to live in a southern part of the USA, we always love any opportunity to take a trip out of Portland (OR) for drier, sunnier weather in order to shake off the chill and fly with friends… Treasure Island (FL) fits that bill very nicely.

My first time to this festival was in 2008, when we took a large iQuad team there… We had quite a bit of fog that year, but it wasn’t cold, it wasn’t raining, and we greatly enjoyed the sunny spots and a day trip to Clearwater afterward where we did lots of team water flying in some truly gorgeous weather.

I came back again wih Ben Dantonio in 2009, running our first TI Rev Clinic there is some absolutely bone chilling weather on Friday, but again we had a trememndous time and enjoyed some good weather on main festival days. What I did notice in both 2008 and 2009 though, was a sense of division between the various kiting genres (quad, dual, show kites, etc)… Most certainly not by design or intent, but with the field layout having sport kite competition WAY down at one end of the beach and the main demo field being a good distance from where the Rev fliers tended to gather in front of the Thunderbird.

Although I missed 2010 in favor of a local indoor event and the KTAI trade show, I returned this year (3rd time to TIKF) and joined by my lovely wife TK, I’d spoken with organizers Steve and Sherri Pigeon beforehand and they described their efforts to remedy some of the field issues for 2011… I’m happy to report that in my experience, they succeeded quite nicely! 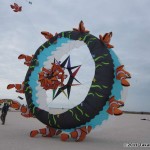 On Friday, Saturday and Sunday this year, the wind generally started coming off the land as an easterly (Treasure Island is on the Gulf Coast) but more often than not, ended up turning either off the water or along the shore as the land heated up and changed pressure to make it possible… For the majority of the festival days, we had VERY flyable wind and were down to light sweater or even t-shirt weather through the midday hours thanks to some very sunny weather.

The sport kite precision competition was still held down the beach a little ways, but competitors finished that up pretty quickly (thanks to keen organization by Robbie Boerth and the rest of the Eastern League on hand), then made their way over to the main demo field by midday to join the demonstrations which really added to and rounded out the presence of the festival quite well… Especially with them completing the ballet portion of their competitions on the main field, there were a lot of excellent routines that were clearly appreciated by the large crowds that came out to enjoy the show.

NMP Novice Individual Multi-Line Precision
No competitors in this discipline.

MPP Masters Pairs Dual-Line Precision
No competitors in this discipline.

MPB Masters Pairs Dual-Line Ballet
No competitors in this discipline.

On the north side of the demo field we had Barry Ogletree (whatakite) and his supporters with their large show kites and banner displays, while both dual and quad line fliers assumed positions on the water and south sides of the main field. There didn’t seem to be same same sense of division between the various areas, there seemed to be more crossover interaction between the different kiting interests and I think it felt like a cohesive festival from start to finish.

Also spotted with some of their lovely creations and acquistions were Martin Blais, Dean Jordan and Peter Boynton, really great stuff to be seen on all parts of the field… Judging by the overall sky display, I’m sure there were a number of other notable and knowledgeable fliers, even though I didn’t have a chance to identify them.

On the main field, Terry Murray did a really brilliant job of announcing all day, every day… I’m not sure that I’d actually focused on Terry’s announcing before, but I have to say he was among the best I’ve heard! It’s not so often that we have a voice on the PA that creatively balances between speaking to the public (education, introduction, sponsor and organization recognition), motivating the performers (spreading the love and citing flier accomplishments or background), juggling the music cue and most importantly, keeping a real sense of flow – no dead air, but insightful and casual throughout. I know I’ll Terry will be on my hot list if any organizers tell me they’re in need of a good announcer. 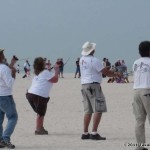 The Rev Riders flew almost non-stop all weekend, providing quite the show of quad team flying for the robust audience that came out to enjoy both sun and kiting on the Florida gulf coast… Team members Scott Weider, Rich Comras and Laura Berg were also joined at various times by Paul Dugard, putting on some of the best performances I’ve seen from them thus far – getting better and better every time out. 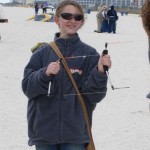 Members of 180GO! (Mike Kory, Jeff Faje, Dayton Dave), the Koenig Family (Mel, Scott and Laurel) and a number if other fliers were in and out of small mega Rev teams throughout the weekend as well – it was especially cool to see young Laurel (12 or 13?) taking some time on the front of the line, leading and calling out team maneuvers… She did extremely well for being so new at it, learning very quickly and adding a bit more fun for her co-pilots, some of whom were three to five times her age. Treasure Island Kite Festival

Nice job Laurel, keep it up! 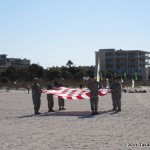 Also doing a good bit of mixed team calling was Jay Nunes (formerly of teams iQuad and QuadFX), Mike Kory and Scott Weider… I stepped in to call just for the main mega fly on Sunday (19 kites), preferring instead to watch and enjoy the different styles. Since my squad helped to popularize and “seed” Rev team flying around North America, it’s been truly wonderful watching everyone take the pastime and make it their own, adapting their own styles and regional flavors, totally independent of iQuad and the like… I’m pleased to say Rev team flying is now fully on it’s own inertia with lots of capable callers and pilots throughout North America. 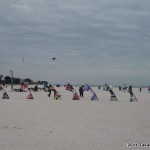 Back on the demo field, we saw ongoing demonstrations by many of the competitors and visiting fliers throughout the weekend, including Dennis Smith, Paul LaMasters, Jared Haywerth, Charles and Laura Stonestreet, just to name a few… Again, too far too many for me to name or remember, but all a valuable part of the overall show.

TK and I also got in some demo time as REVOL (pairs), and snuck in myself for a few solo demos as well.

Pat, our Executive Food Officer (EFO) from the Sunset Flyers kept us very well fed with some fantastic home cooked meatballs, chili and other delectables all weekend… While she deserves due credit for leading the charge on that, she’d be quick to tell you she has a lot of help from the extended family within the Sunset Flyers group.

As always, I loved the unofficial “R Bar” gathering, always food for a decent surf and turf dinner (thanks Duane), lots of revelry and good friends… It’s always good for some comic moments and singalong as well with the seemingly ever-present live bands they feature there.

The official Saturday night social was absolutely classic, with a “Treasure Island has Talent” motif and several performers… It all started with a fabulous kite-modified cover song by Sherri Pigeon, followed by several skilled (and/or funny) performers, and then finally the closer which I could never have predicted in a million years.

Holy smokes, so funny, oh so charming… I was blushing so hard my ears hurt, and all the while TK is laughing her butt off.

Thanks for the loyalty honey!

Good roast, thanks and kisses to Clair (aka Patsy Cline).

With freezing tempatures (literally) leading right up to the 2011 TIKF and an incredible lightning storm the day after, I think it’s appropriate to say we were truly blessed with three days of great weather, great friends, great flying and great times… Yeah, let’s do it again sometime!