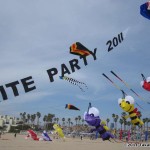 Kite Party. Kite Party 9 in fact. Make note of the complete lack of the word “Festival”. Keep in mind there is no competition. In fact, there is barely a schedule. There’s a small number of demos and most days, the attendees would see even less of those! There’s sun, there’s sand, there’s kite fliers, and good times.

There is close by food, a fun pier and an awful lot of people. The grand total of all of these words is to suggest that Kite Party is perhaps one of the best “non-festivals” going!

Taking place around the main pier area of Huntington Beach, California, Kite Party is one of very few events that take place during what we in North America refer to as Winter. While much of the rest of the continent is still fighting off snow and or rain in early March, California is beginning to emerge from it’s legendary, terrible winters where it MAY get down to 50 degrees on a particularly rotten day. Maybe that’s a mild exaggeration but, only a mild one.

My past experiences with Kite Party have shown it to usually be better than 60 and frequently over 70 degrees. I don’t think it’s ever rained any time I’ve gone down to it, and I remember one Kite Party, the one iQuad held a clinic at as being a tad on the chilly side.

Kite Party began 9 years ago when some discussion on the Gone With The Wind forum generated the idea that maybe a few kite flyers would get together down at Huntington Beach, where Dave Shenkman’s long running Kite Connection store is located. Each year, the amount of people showing up has notched up a little bit, making for an even more party like atmosphere. Dave gets a sound system in, tapes off a pair of fields and lets kite flyers have a great time for a couple of days on one of the nicest beaches in California (and for this, we all most certainly thank Dave and all the rest of the people who help put on this event!).

For me, the event started sometime Thursday morning with the usual fly down south, with our newest recruit for the iQuad roster, Willow Robin in tow.

Decidely uneventful trip down there, and Bazzer met us at the airport. We were settling into the room and waiting on John and TK to roll in. And then things got strange.

Someone walked by the room and said that Japan had just been hit by a massive earthquake. Flick on the TV and sure enough, a devastating 9.0 earthquake. Of course, we informed TK as soon as she rolled up with John, and thus began a long night of her getting on contact with friends and loved ones to be sure they were safe. Thankfully, by the time morning light came around, she knew that all were safe and sound.

Renowned Japanese kite collector, Modegi-san, did have his museum badly shaken up and while we are on this topic, please pop over to the AKA web site where kiteflyers around the world are banding together to see what we can offer as help in these times for Japan.

You can read more about all this in the Kites… Life article in this issue, written by our Assistant Editor, formerly a resident of Japan.

The earthquake’s effects even reached as far as Huntington Beach in a sense, they basically closed the beach down until 4pm that afternoon upon fears of the resulting tsunami reaching the west coast. We were close by the beach (but, up on high ground…) but, we noticed nothing. But, better safe than sorry, and other places along the coast certainly had issues, with both Crescent City and Brookings suffering destruction of their harbors.

Just a tragic event on so many levels. But, when life hands you lemons, the best thing you can do is make lemonade. While we could have sat there and moped all day long waiting for the beach to open, John noticed that the parking lot was closed as well and thus, it became a place to fly for the afternoon. And what a lot of fun THAT was!

Nothing like some good solid obstacles, such as lamp posts and palm trees to make flying a little more interesting and challenging! Many laughs were had as people began showing up for the weekend’s fun. The web cam likely looked a little weird with an utterly empty beach for most of the day but, as soon as 4pm struck on the bells nearby, the beach quickly filled up with flyers looking to make the most of what daylight was left. All in all, as we convened at Fred’s, the local Mexican restaurant, it was duly agreed upon that it was a pretty fine day all in all and the weather looked to be just as fine for the next two days.

And as predicted, both days were simply stunning days. I’d go as far as to suggest the nicest weather I have seen down there so far. Kites and flyers were out in force from 9am onwards, pretty much until the sun went down.

This being the “new” weekend for daylight savings time to begin, this meant an extra hour of sunlight on Sunday as well. I neglected to mention above that Dave also brings in a few manufacturers as well, with Mark Reed from Prism there, as well as Jon and Marianne Trennepohl from Skyshark/Skyburner, David Gomberg from Gomberg Kite Productions, as well as nearby locals from San Diego, Joe Hadzicki, Lolly Hadzicki, Ben D’Antonio from some company called Revolution?

All were showing off new kites!

Mary Ann from Into The Wind was also there. She had a new kite out with her as well that was well received out on the sands. Some new kid designed it, I am pretty sure his name was Jon Baressi or something like that and the dual line kite itself was called the Kymara.
Look for it at a retailer near you, sometime very soon (reportedly in May). I tried the kite myself and I can quite confidentally say that my one remaining dual line trick works pretty well with this kite, the ever popular lawn dart landing. To be fair, I did actually manage to land it like a normal person at least a couple of times…

I mentioned the smallish amount of demos that were done during the weekend but, one in particular stands out in my mind. Kiting and sport kiting in particular is without fail, dominated by men. Not through design or anything else, that’s just how it has evolved. I’m sure someone has done some exhaustive study as to why this is and I am sure there are a lot of reasons.

However, there have always been women involved and over the years, a good number of women sport kite flyers and I’ve noticed over past few years, a gradual increase in these numbers as well. I think this is a good thing, I think women bring something to the “sport”. We have even seen this on iQuad, with Takako (TK) joining us first, and now Willow Robin as well.

It does tend to tone down some of the boys humor while away at festivals but, this isn’t necessarily a bad thing. One of the newer flyers we’ve watched grow and become competent on Revs has been Carol Pittman, who along with her husband Cass and their two adorable greyhounds, have been popping up at west coast events for a while now.

At some point on Saturday, Carol rounded up five women (TK, Willow, Jeanette Lummas, Laura Berg and Lynn Foster) and dropped 6 Randy Tom custom Revs out onto the sand and voila! Instant, all female team! They did a great of this, you can see the video evidence below! And a special nod to Willow for calling a team for the first time after less than two years as a Rev flyer. Let’s hope this trend continues!

Saturday night always brings the Pizza Party / Auction and I swear, every year, the place gets fuller! Dave had some great kites to sell off but, alas, he managed to lose his truck keys for a while and the two really nice custom Revs he had waited until the next day to be unveiled.

Thankfully, Mark Reed managed to find his keys, so Dave was not stuck at the Lamppost place all evening long! I mean, I can think of worse fates than being stuck in a pizza restaurant…

Ah Sunday, Sunday always comes too soon on a Kite Party weekend, even if daylight savings changeover delayed it by an hour!

Mind you, kite flyers tend to amble onto the beach a little slower on Sundays too but, soon enough, the sand was once again filled up with quads, duals and the large single lines manned by Dave Gomberg and a few others (Hi Ron Gibian! Hope you felt better than Saturday morning!). Of course, as you’d expect with such nice weather (And honestly, SoCal has certainly seen more than it’s

fair share of rain this winter) the pier was packed, the boardwalk was packed and yep, another excellent day of flying was had by all.

Sunday also brings us to the charity effort centered around not so little any longer Ben Lummas, who was spotted surrounded by young women at one point. Again, the bar was raised and more money was raised towards children’s cancer. In many ways, this part of the day has become a favorite for me, watching as the sky filled up with Premier- donated kites, flown by the general public. A fitting way to end the weekend!

So, all in all, if “Winter” has become annoying for you, if you need a break and you need some sun, sand and kites, I highly suggest you make the trek down to Huntington Beach next march for the TENTH edition of this festival. It’s already marked down on my calendar…