While John usually writes this column, I felt moved to report on the recent events in Japan, particularly news from the kiting community there as it’s near and dear to my heart having moved from my home in Tokyo just one year and a half ago.

We had just landed at the Santa Ana airport for Kite Party when we got text message about the earthquake from our teammate David Hathaway – I spent the better part of the night calling my family (in Niigata) to see how they were getting on and fortunately, they were all okay.

Thinking of all the other folks over there, I searched Japanese news sites and learned that the earthquake was centered was in Tohoku (Northeast Japan).

It’s one thing to hear about it, and another to actually see the effects… This video shows a six-minute progression as the tsunami rolls through the Miyagi Prefecture, from when the streets are dry through the point where entire buildings are being uprooted and carried away in the onrush of water.

The website Boston.com has a moving assortment of photos showing many of the areas and people effected by both the earthquake and tsunami.

Fortunately, my friends and family were all okay because they live far away from seismic center but communicating with them, I heard such things as “I flew out from the building immediately during the quake.”, “our office building elevator was stopped, we were confined inside the building for part of the day”, “Tokyo Tower is now tilted from the quake.”, “liquefaction occurred in the parking lot of Tokyo Disney Resort that is reclaimed ground (landfill)”, “can’t get back home because of trains are stopped”.

Located in the Nihonbashi area of Tokyo (160 miles away from seismic center), the Japan Kite Museum, JKA (Japan Kite Association) chairman Mr. Modegi and JKA Secretary General Mr. Fukuoka told me that many of their historical exhibits were ruined, and Modegi’s restaurant (named “Taimeiken”) was similarly affected.

The Japan Kite Museum is on the 5th floor of same building as Taimeiken, and at the time of the earthquake, they couldn’t walk because of the strong shaking back and forth. With so many of their exhibits falling, a lot of kites have been damaged and it seems some of the archived items there cannot be restored, many old, treasured kites damaged beyond repair, according to the story of secretary-general’s Mr. Fukuoka.

The JKA’s main office shares space with the kite museum, and they experienced similar damage as the museum. Almost everything fell down, shelves collapsed as shown in the photos below. The elevator also stopped working, and had not been repaired when I last spoke with my dear friend Mr. Modegi.

Also in Tokyo, one of the most popular kite flying locations (Kasai Rinkai Park – near Tokyo Disney) experienced liquefaction and has been closed until further notice.

There have been scheduled rolling blackouts by Tokyo Electric Power to moderate use of electricity and lessen the load on power plants, trains stopped for several days, and stock quickly disappeared from the convenience stores and the supermarkets because people were worried about circulation of general merchandise such as food and toilet paper. The aftershocks are still happening and are likely to continue for several months or more, and all of Japan still has been unable to return to their usual lives, many essential items are still hard to obtain.

Sadly, some of the Japanese kite festivals have also been canceled by various related circumstances.

Not only kite festivals, but also the summer fireworks festival in Tokyo and the official Japanese baseball league opening games have been canceled or postponed… These events are not close to stricken areas, but they are thinking about people in such areas and have seriously considered these self-imposed controls.

Japan has received offers of support from more than 100 countries and regions, as well as more than a dozen international organizations since the earthquake. Countless people and rescue dogs have become involved the day to day search and rescue operations in order to find missing persons, these brave “front line” volunteers come from 13 different countries such as the United States, South Korea, China, and Russia and regions in the stricken area now.

South Korea sent two rescue dogs with the first rescue team. The U.S. Army recently announced “Operation Tomodachi” – it means “Operation FRIENDS”, and exists to supply much needed essentials (food, water, etc) and assist with the front line relief activities. New Zealand had had a huge earthquake recently as well, but they sent 54 people and dogs to assist with the rescue. Taiwan also did a TV charity program, and has contributed a large sum of money for relief and rescue efforts.

Such compassion and direct offers of assistance is amazing, to say the least, and the Japanese people appreciate it deeply, beyond words.

The US Army – Operation Tomodachi…

Help from lots of countries…


We’ve seen so many efforts to collect donations for relief efforts by not only nations and organizations, but also in cities all over the world and family operations… I saw a sign outside a surf shop in Huntington Beach (CA) that stated they will donate 10% of all sales to the Red Cross, and in Portland OR (where I live now) – a charity concert was held featuring Taiko drumming, well known Japanese musicians and other arts, and even now, donations are being collected all over Portland.


During our recent visit to Kite Party in Huntington Beach, event organizer Dave Shenkman made an announcement before my individual demonstration on Saturday, calling for a moment of a silence to pray and hope for the people of Japan. Thank you very much Dave!

Representatives of the AKA (American Kitefliers Association) and the Drachen Foundation were among the first to call out within the North American kiting community for donations to assist with relief efforts, joined by Revolution Enterprises, Kitelife.com, well known kite makers and others.

Anyone can make contributions from the AKA web site until end of April (National Kite Month), and a drawing will be held for those who contribute.

Prizes donated by folks in the kiting community include: 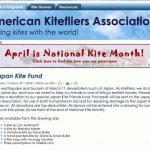 We contacted the JKA directly to inquire about how the donations will be used, and they replied:

We want to use it for the Tohoku region, where the earthquake struck. There are a lot of kite friends who have been affected. Of course, not only kite friends, but also the many people suffering there in this very hard time, so donations will be distributed between stricken kite fliers and local relief organizations as determined by JKA committee.

In our communication with the JKA offices, they also reported the current situation of some kite fliers after the disaster…

Mr. Masakatsu Kato, chairman of the Kesen-numa kite club is alright despite large damage received from the tsunami in his area. Their kite festival was just held in Kesen-numa in February… Many kite fliers in the Kesen-numa area are not JKA members, but are dear kite friends and we worry about their safety.

Mr. Shigeki Endo and his kite friends in Sendai are alright, as is Mrs. Tokuko Sato in Aomori.

Some of our kite friends in Iwaki City are in safety shelters because of the radiation poisoning, though they are fine.

There are many kite fliers we’ve not still been able to contact, and we hope they are okay… We will continue trying to reach them.

More, from the heart of the JKA…

The sky is blue just like it was during the disaster. However, kites aren’t flying… Now we’re realizing for the first time, without peace in our world, we can’t fly.

Kite festivals in various parts of Japan were discontinued by self-imposed control. Other festivals that rely on municipal sponsorship have been postponed as well, since the budget used for such things has now been allocated for relief and public assistance.

There are lots of people who were looking forward to the kite festivals, but they will be held when we recover from this disaster. There are people who taste the despair of life now, so many sad and uneasy… How can we understanding their feelings?

Today tons of people all over the world worry about this tragedy in Japan.

We have received countless messages of a warm encouragement from kite friends all over the world via Facebook and E-mail, etc.

We think the thing to do is to make an effort to regain our ordinary days, the same goes for people in the regions most affected (earthquake, tsunami, and radioactivity). If you were the one(s) in this situation, how would you want people to help? Please give that to the stricken people with this idea in mind, what you would want if you were in their position.

The sympathy from each person worldwide and their individual efforts may become the road to helping on a large scale, YOU can make a difference.

Please fly a kite for those of us who cannot, this is what we’re asking as Japanese kite fliers.

Many disaster help funds have been set up for victims of the earthquake and tsunami, and donations are being gathered all over the world… We’ve listed many of them here for your easy review, and as the JKA stated above, “If you were the one(s) in this situation, how would you want people to help?”.

People all over the world are sincerely cheering for Japan, wising them success and relief.

The disaster is a really sad thing. However, Japan is a strong country and it may take some time, but I know they will rebuild again – again finding comfort in their lives, and better prepared for disasters with this experience behind them.

John and I sincerely wish for our many kite friends and family in Japan to look up, yes, looking at the blue sky we all share, and know that we are all thinking of them – keep hope.

To all you reading, sharing in my feelings and thinking of Japan, thank you for your prayers.