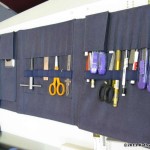 I first heard about this event when Nigel Spaxman emailed me and wanted information regarding the Papillion Kite I had flown at Long Beach International Kite Festival 2010. Mine was built by Kelvin Woods but the original design was by Didier Ferment. Its unique flying characteristics were bound to capture the interests of the Spaxman mind.

Once I heard the event was going to happen in Parksville B.C., I told Nigel I would come up and help him if they would find me a place to sleep. I had always wanted to explore what I thought was the wild and wooly Vancouver Island. I even had visions of a sleeping bag on the floor of someone’s summer cabin. I did not care, I wanted to go and support the BCKA in their efforts.

In the early years of The Fort Worden Kitemakers(Retreat)Conference, WKA, AOK and BCKA were all involved in the presentation of this Northwest Kitemaking event. Somewhere along the way, the conference became its own entity as an arm of the WKA for legal reasons. Not too long after that AOK started Oregon Kitemakers Retreat in1993 held at Rockaway Beach. It draws people from all over the world.

The BCKA has now begun its own adventure into the world of kite making seminars. The first event was a huge success not only in the selection of classes taught but with the daily breakfast lunch and dinners. Wayne’s Pattison’s wife, Jennifer together with his brother Dale that kept all participants well fed. All meals but lunch were sit down and gather around the table meals.

The menu was extensive and gourmet. 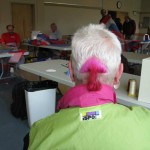 On May 6th I packed my car full of kitemaking materials and tools, plugged in my Ipod with its 8,000 albums thanks to Jim Day and with my new “Enhanced Drivers License (no need to have a passport anymore) headed up to the Peace Arch near Blaine which is about a 2 hour ride from Seattle. I drove a little further to Richmond BC where I met Nigel Spaxman at his quaint cottage on the North Fork of the Fraser River. Together with Allison we took his car to the Tsawwassen Ferry for the two hour crossing to Nanaimo. The sky was overcast but the rugged coast of British Columbia and Port Roberts were still visible.

Even with clouds it is a stunning ride.

The ride up the road to Parksville took about a half hour. We drove into a beautifully maintained community overlooking the Strait of Georgia. Far from a summer cabin, Wayne and Jennifer greeted all the participants into their warm and beautiful home. We started feasting immediately. Then Wayne led us all to our abodes on the same grounds. No sleeping bag needed because I had my own plump Queen sized bed, fireplace, kitchen and bathroom right out of the Martha Stewart Magazine.

Next morning we had a sumptuous breakfast to start the day out then were off to classes.

The classes were held in the Parksville Community Center and all in one room.

Paul Horner taught his light wind Optical Illusion Roks, Nigel taught his simplified version of the Papilllion, I taught the Gypsy Kite by E.W. Redmond, and Dan Kurahashi taught his Ghost Kite Train on Sunday. It was a nice cozy affair. It was like taking two classes at the same time. All of us sewed and sewed and sewed then all of a sudden butterflies started emerging from their cocoons.

Optical Illusions started to occur. We even had time to go out and test-fly the butterflies. They flew fabulously. Nigel always looks at something and wonders how he can simplify it. He did a great job this time. 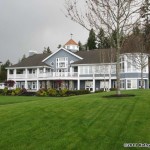 All the while Dan Kurahashi has set up an immense device where he is rolling out and cutting thousands of plastic sled kites for the BCKA. BCKA makes kites with kids all year long to raise money for their events. It was a class in itself to watch the techniques Dan had devised for pumping out all those kites in a short amount of time. He reminds me so much of Lee Toy.

Having the two classes in the same room also gave us a chance to snoop through everyone’s tool boxes. There is a story behind every device a kitemaker comes up with to teach a class. Dan had set up a circular sander upside down. Everytime his exacto knife went dull from cutting the plastic sleds he just sharpened it on the sander. In contrast to Dan’s table jumbled with tools, Paul had his table laid out in a perfectly orderly manner. Paul’s tools were so pristine it looked as though they had never been used. They had in fact been well used and well taken care of.

Although the whole seminar consisted of about 10 students, a mass of information was disseminated. Because it was small we were able to wander over the boundaries and ask questions. We just did not have to worry about getting finished in time. Paul started teaching an impromptu class of the lanyard knot. Pretty soon he had most of us standing around asking him “now how did you do that again?” We did finally move onto the Cinch Knot.

At 6:00 we broke for dinner and had a wonderful meal at Wayne’s house. Jennifer sat with us as if having 10 people over for a sit down dinner was a way of life for her. I pointed out to Paul how calm she was. He said “that is the sign of a great hostess.”

We went back to the community center where we watched more development of the Optical Illusions and I taught the Gypsy Kite Class so patiently taught to me by Cat Gabriel. See one, do one, teach one.

Sunday we had a wonderful breakfast and Jennifer fixed us sandwiches for the Ferry ride back to Tsawwassen. Dan taught his train class. I wish I had had time to take it but the trip home was on the agenda. Dan had devised a fantastic method for heat sealing pockets onto a plastic sail. He had found a wonderful hot knife that could do the job. His kits were well thought out. I cannot wait to see them fly. I may have to buy just one more tool because it was so cool. 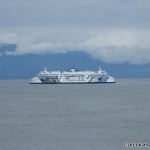 At noon the three of us jumped into Nigel’s car and we were off to the ferry. The ride back was just as wonderful as the ride to the event. The Canadians take pride in landscaping their highways. I so wanted to stop by the side of the road and go snitch a couple of the wonderful evergreen trees that had been so carefully planted on the road dividers. Of course it not only would be illegal and there was no way I could get them back through the border. Can’t say I didn’t think about doing it though.
Once back, I had to load my car up at Nigel’s and take off to get home at a decent time.

The two hour ride home was spent basking in the memories of the wonderful time I just had. Making kites with people I had known for 20+ years, getting to know others I had been acquainted with like Dianne Obrien ( she had a pink kite carved into her hair!), and getting to know new people like Dale Pattison, Jeremy Perceval and Cathy Jung.

How does one thank Wayne and Jennifer for an event that was just perfect? The only thing I could think of was to give Wayne the butterfly kite I had made.

I hope BCKA will put another kite making seminar on, more people need to have the wonderful time I had. I plan to go again once I hear that it is happening.
Thank you BCKA!!