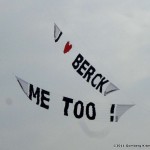 The impact of Berck is remarkable. When the tide is out, you can almost imagine walking across to England. The flying fields stretch the breadth of the promenade — nearly half a mile wide. And from street to water, and side to side, the sky is filled with shapes and colors, and sounds.

Few (if any) events in the world compare to the kiting spectacle of Berck sur Mer.
This was a special, 25th anniversary show. And for once, the sun came out. Typically we pack rain gear, prepare for heavy winds, and brace for cold blasts off the North Sea. Tee shirts and short weather caught everyone off guard!

On Sunday, 300,000 people came to see the kites. And over the course of 12 days, they estimate there were more than 1.5 million spectators. There wasn’t a parking spot within five miles of the beach.

Check this video for a taste of the Berck experience. Double click on the YouTube icon if it doesn’t load quickly.

As I’ve said before, Berck is a showcase of large, creative kites. Giant Lynns are commonplace. To stand out here, you need pink cats and hairless dogs. On my field, huge Looney Tunes characters dominated. Bugs, Daffey, Porkey, and Marvin all came out of their bags.

Further down the beach, the Germans lofted Super Hero Bears and a Teddy Wedding party.

There were fish and reptiles, dragons and birds, decorated school busses, Japanese warriors, and a plethora of huge European cartoon characters. There was even a flying beer bottle opener!

The very great majority of kites were inflated and flying in stacks. A ceiling of Pilots and Lifters floated above the show.

In the center arena, maneuverable kites and music kept the crowds spellbound. Workshops for kids and several exhibits of kite art, history, and culture were spread along the promenade. 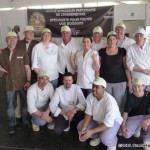 Each day, hundreds of kiters gathered for lunch in the communal dining tent. It was loud, friendly, and multi-lingual as delegations from Thailand, China, and Indonesia joined the group.

Friday we celebrated with a banquet and Ray Bethel was presented the medal of Berck (preceded in past years by Gerard Clement, myself, and Abdulrahman AlFarsi). Saturday we paraded through town with marching bands and elected officials.
Then on Saturday, a large and dramatic choreographed night show filled the warm breezes. It culminated with an astounding firework show celebrating how this smaller even has grown through the years to became a major attraction and central economic driving force for this small city on the northern coast of France. 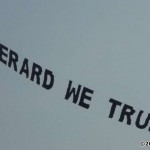 Congratulations to Gerard Clement who has been a superlative organizer over the past quarter-century. His vision, together with the support of the city tourist managers, have created something really special. There weren’t just three million visitors. There were three million smiles.

I’m home for almost a week and then off again. Check back for another travel adventure soon.