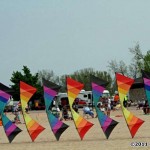 23 years ago, Steve Negen and Mackinaw Kites began a tradition. A tradition that has changed locations twice (in the very early years), tweaked and modified the format a couple of times and endured numerous up and downs over nearly a quarter century (Wow Steve, I’m sorry, I hope that last line didn’t make you feel old!).

Nowadays, it’s called the Great Lakes Kite Festival, and it takes places the weekend before Memorial Day, the picturesque town of Grand Haven, Michigan. For myself, this was my fourth visit to the festival, but, I do know some people have made every single festival over the years, including Lee Sedgewick. I think Steve needs to have a medal of honor made up for such people!

Obligatory weather preamble : The weekend was slated to start off in a so so kinda fashion and gradually deteriorate into thunder, lightning, rain and perhaps a few swarms of locusts by Sunday. In fact, the forecast was so bad for Sunday that I didn’t even pack a 3rd day team shirt since I was –convinced- I would not need it, at all.

There was also a small matter of a predicted end of the world on Saturday as well, which only served to reinforce the idea that I could shave a little off my luggage weight by only taking two iQuad shirts. I’m all efficient like that. And in fact, Friday was pretty much as predicted, with a fair amount of fog and roughly 15 minutes of actual sunshine. But, no actual rain. And, that’s fine, Friday for the most part consists of people arriving, some amount of classes and a small handful of demos late on the afternoon.

But, at various points, if your kite was on 100 feet of line, the odds were quite excellent that you would not in fact see your kite, especially if it was grey or white. And with lots of fog around, that guarantees next to no wind either. Not that Steve Negen would have noticed either of these things though.

For the first time in 23 years, some level of government demanded that he now has to have a PERMIT for such things and thus, the requisite number of fire extinguishers, no smoking signs, and a special certificate, affixed to the tent (which for the weekend, is actually the largest outdoor kite store in the world!) declaring it to be made from non flammable materials.

All this, and the Chicago Fire hadn’t even taken to the sky yet! And it was also decided that his electrical cord was also fatally scuffed, or had too many tape marks on it or, something else equally as inane. I don’t think Steve caught a break all day long, however I will say that when 4PM rolled around and it was time to go through a few demos, it was all ready to go, power for the PA system included. Foggy demos, but, there was music!

Friday night, many of the participants head up to the White Pines Middle School for the Indoor fly. Steve now has this down to an art, it lasts precisely one hour which seems to be just about the right length to keep people entertained and wanting just a bit more once it’s over. And what a special night it was, with Bazzer Poulter coming out of his long indoor retirement (Early February, 2011 at SPI) to perform once more with iQuad indoors!

If nothing else, always be entertaining 😀 Great performances were put in by Lee Sedgewick, Sam Ritter, Andrew Murphy, Terry McPherson (mystery ballet style no less!), Jason Arnold, and a fantastic demonstration a bunch of RC flown kite/gliders from Premier Kites.

Much like a model airplane, the propeller keeps it moving and manipulation of the flight services via a full RC control panel worn around the pilots neck. Word has it that the Detroit Windjammers have bought a whole flock of them for low wind use when the huge stacks won’t quite make it up. iQuad’s plans for them remain unresolved, pending the development of some kind of remote sticker deployment.

Saturday morning arrived and the weather looked pretty promising! After a quick stop for breakfast, we got down a beach that was slowly filling up with people, both kite flyers and the general public. All of the issues of the day with the “new” permits before had been resolved and it was onto a day of great flying.

Ann Von Driska did her usually great job dealing with the microphone, and wrassling people into doing demos and managing the schedule, and the Mackinaw Kites employees kept the world’s largest temporary outdoor kite store rolling along. Ben D’Antonio was giving Rev lessons, ably assisted by some of the local kite rev flyers and various members of the IKE crew out of Illinois and the sky was kept filled with kites all day long.

But for the large show kites, down on the second field, it was often a day of challenges. Light winds meant that some of the kites had trouble holding onto one position in the sky and much as I noted to David Gomberg at one point, it was looking like a roller derby in the sky at points, with large kites careening back and forth, taking each other down to the sand. Fantastically amusing for the crowds to watch from a distance, though pretty frustrating for the flyers involved.

But, at no point when I wandered back there did I see anything but a smile from Gomberg, Al Sparling, Darryl Waters, Jason and Chaelee Madison, or Chad Macy. They always managed to have some kites up in the sky.

Over in the demo field, the winds, while a bit light, were certainly flyable by anyone so we saw a good collection of demos being rotated all afternoon. Mid afternoon means it’s candy drop time, so Lee Sedgewick gets the Rev 1 stack with the candy bucket out, Annie Ritter and Elizabeth Gordon start herding kids (all pleas for a proper cattle prod continue to go unheeded by Steve Negen) and boom, the sand is covered in little children.

The light winds worked in Dave Bush’s favor, this meant he could fly his collection of Thor’s Hammer without us having to go scrape him off the campers at the far end of the field.

Chicago Fire, The Detroit Windjammers, Fire and Ice, The Blues Brothers and iQuad all did numerous trips through the demo field and by the time the afternoon had wound down, exhaustion set in for everyone.

But, a quick bite to eat, refresh, recharge and then most of us headed back down to the beach for the nite fly. In typical fashion, there was great wind coming in and we had forgotten our light sets. Of course, if we HAD brought them, it likely would have been dead out, so, hey, everyone else got to fly and have fun!

Now, if we had thought that Saturday was a pretty fine day out on the beach, and really, it was, all we had to do was wait for Sunday to roll around to make for an even BETTER day! Sunny, warm and a nice 10 – 15ish mph breeze all day long.

The kind of day kite flyers live for, I could not think of any way at all that it could have been any better. The large kites simply popped up into the air and held their space. All of the demo flyers got out either midvents or full vented kites and the crowds jammed the beach for the entire day, all along the entire beach. It was one of those kite flying days that you hoped would never end.

The last event/demo of the day ended up being a rev megafly, with iQuad and some of the IKE crew and even one brit who had stealthily managed to time his vacation to the US to coincide with the Grand Haven festival. Nicely played!